REDMOND, Wash. – Dec. 15, 2011 – It’s not every day that a person gets to create the user interface for a mobile phone that will be used by millions of people around the world. But that is exactly the work of a small group of engineers at Microsoft.

For the past several years, the Windows Phone Shell Team has been continually improving the user interface for Windows Phones with the goal of making them incredibly intuitive and engaging to use. The team recently completed work on Windows Phone 7.5 “Mango,” the largest and most feature-rich software refresh of Microsoft’s mobile operating system to date.

The “shell” refers to the phone’s core user experiences, such as the lock screen, start screen, live tiles and similar components.

“Our work is very visual, very engaging, and it also has the Mom factor—you can show your Mom exactly what you’re working on and she’ll get it,” says James Drage, a senior software development engineer on the Windows Phone Shell Team. 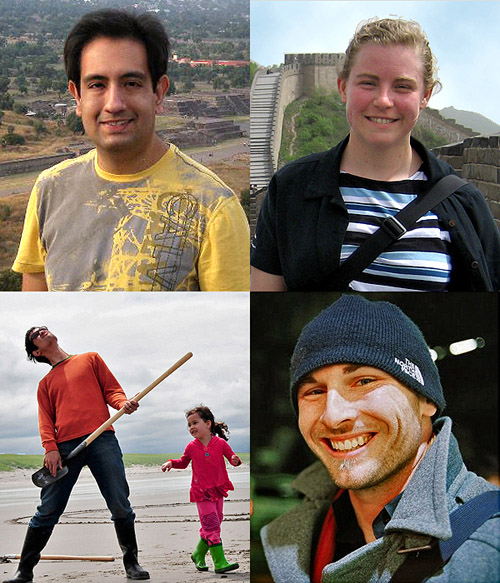 Ricardo Espinoza, a software development engineer on the team, agrees. “Working on the Windows Phone has taught me how important it is to create something that’s intuitive right out of the box,” he adds. “Mobile phones need to be easy to use even for somebody who’s never used one before. You can’t have a learning curve.”

Microsoft News Center (MNC) recently sat down with Drage, Espinoza and two of their colleagues on the Windows Phone Shell Team to talk about their work and their lives, both inside and outside Microsoft.

Drage helped develop several features for the start screen including a prominent feature called the “task switcher” that enables users to flip back and forth among applications that are running. His interests outside of work include cooking, snowboarding, performing music and playing the piano and guitar with his 5-year-old daughter. 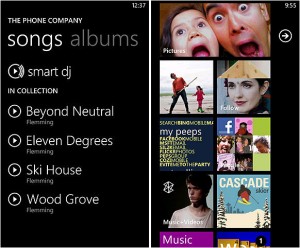 Windows Phone 7.5 Screenshots. The “Smart DJ” feature, shown on the left, automatically creates a music mix based on an album, artist or song the user likes, while “task switcher” enables users to flip back and forth among running applications. Image credit: Microsoft

Espinoza worked on the lock screen for the Windows Phone 7.5 update, including how appointments, missed calls, incoming messages and personal wallpaper are visually displayed. Outside of work, he likes to travel, go to the movies, hang out with friends and read.

Joshua Phillips, a program manager, worked on the “Smart DJ” feature, which automatically creates a music mix based on an album, artist or song the user likes. When he’s not at work, he’s likely hanging out with his 2-year-old dog, Ender, playing volleyball, riding his motorcycle, traveling the world or skydiving.

Sue Loh, a senior software development engineer, monitors the health of the Windows Phone including performance, battery power, memory—all of the things that can affect how the software functions. Her life outside of Microsoft includes watching her two young daughters, playing hockey, and volunteering her time to encourage high school girls to pursue careers in computer science.

MNC: How is your work going to change the world?

Phillips: Well, we’re not going to cure cancer or end world hunger, but I’m confident we’re changing the world’s perception of Microsoft. Our team has played a key role in getting the company to integrate design deeply into the development of our products. Windows Phone is also the first place where many of our great assets—Bing, Xbox LIVE, Zune, Office, etc.—came together to make an amazing product. It’s a pretty great feeling to show your friends a Windows Phone and hear them say: “Wow, that’s sexy.”

Espinoza: I think our work is changing the way we interact with computers and with each other. Now you can look up or verify information right in the moment, wherever you are. You can make restaurant reservations and find movies on the spot, for example. You can also erase the distance that exists between you and your friends—no matter how far away you are, you can be in constant touch via IM and email.

MNC: What’s the thing you’re most proud of about your work?

Drage: I’m proud of the people I’ve managed and mentored to help make this a better company. While I’m not currently a people manager directly, I have been in the past, and that experience has always rubbed off on me. I feel you can always be five or 10 times more effective if you help other people to grow. I’m also proud of the products we’ve put together, especially Windows Phone. I talk to people a lot about their cell phone, and I always get really positive feedback about the Windows Phone that we’ve built.

Espinoza: I’d have to agree with that. I like to walk into the stores and see the Windows Phone displayed, knowing that I helped to build it. It makes me proud to see the phones out there in the field.

Loh: Yeah, the impact we’re able to have on other people’s lives is really amazing.  From my years on Windows CE and Windows Phone, there are literally millions of devices out there running software I’ve worked on. I’ve loved the interaction I’ve had with OEMs [original equipment manufacturers], software developers and end users over the years. I’ve been proud to influence so many peoples’ lives.

MNC: What makes Microsoft a great place to work?

Drage: I’d have to say definitely the free soda.

Phillips: Ha! A great benefit, for sure.

Drage: All kidding aside, I’ve been here for 15 years, and what keeps me coming to work in the morning is the opportunity to work with the most amazing people in the field—I mean literally. For example, the design team that we work with are the top designers in the mobile field in the world. To be able to work with those people day to day, brainstorm crazy ideas, and actually implement some of them is really cool.

Phillips: The biggest thing for me is the opportunity to work on all kinds of things. There’s such a large range of products and disciplines. It’s the kind of company you feel you could never get bored at, especially compared to companies that are focused on just one thing like the Web, hardware, or operating systems. We have it all, from games to developer platforms and tools—and that always makes it pretty interesting.

Espinoza: That’s true. And I also think there’s a very great emphasis on ownership. It’s not just that you have tasks to do; you really own how things work, and that puts a lot of responsibility on people, which is great. The other thing is that I get to work with people who really love what they do. That’s a contagious feeling—it creates a lot of excitement.

MNC: Do you have a personal motto?

Espinoza: I think it was Gandhi who said: “Be the change you want to see in the world.” Very often, if people don’t like something, they say, “Why do people do this?” or “Why does it work this way?” I try as much as possible to think in a way that says, “OK, can I do something different about that? Am I doing enough?” Every time I see something that needs to be changed on the outside, I try to change something about myself so I don’t have to complain about it.

Loh: Here’s one that keeps ringing through my head: John F. Kennedy, and I’m paraphrasing, said, “We chose to go to the moon, not because it is easy, but because it is hard.” I really like that. To me, it means that you don’t really achieve anything by accepting where you are. It’s OK for life to be a little difficult; it means you’re working toward something important.

Drage: My life theme is “Keep it Surreal.” I like things that are unusual, that don’t follow convention, that dare to break the rules.

Phillips: “Eternal Sunshine of the Spotless Mind” is probably my favorite movie. The way relationships are portrayed is pretty real. You don’t find that a lot in films.

Loh: The first one that comes to mind is “The Princess Bride” so I’ll go with that. It’s just goofy, it has a lot of really great, memorable moments in it, and it’s fun to watch over and over.

Drage: One that I really love is “City of Lost Children.” It’s very dark and surreal, of course, and has a girl who’s about seven. Having a daughter, I always think about her strength and independence. It’s one of my favorites of all time.

Espinoza: A recent movie I liked a lot was “50/50.” It was an interesting combination of comedy and tragedy, and a topic we typically don’t want to discuss, which is how we face a terminal illness. I really liked the feelings that movie provoked.

MNC: What do you value most about your friends?

Loh: Just being laid back and not having a lot of hang-ups about stuff. My husband and I are pretty relaxed people and enjoy hanging out with other folks who just get together for fun and accept you for who you are.

Espinoza: I want to know that my friends will be there for me in difficult times—that they care, that they can empathize. I try to be there for them and want the opposite to be true as well. I think that says a lot about friendship.

MNC: What’s your dream of happiness?

Loh: Having my grandkids bounce on my knee some day. It really helps put things in perspective to think that whatever it is that just went wrong, it’s not going to get in the way of that.

Phillips: I’d like to eventually own my own business, which is another reason why I enjoy this company. Even as an individual contributor, you have a lot of say in the direction of the product. The entrepreneurial spirit here is very much alive.

Drage: My dream of happiness—if it could get any better than it is right now—would be to slow things down a little so I’d have a little more time to relax and enjoy things. My daughter’s growing up so fast and there’s another baby on the way in April, so things are kind of flying by.

Espinoza: Happiness is knowing there’s nothing major you’d change if you had the chance. I can’t think of a lot of things I would change. I feel happy right now.

MNC: If you could have a super power, what would it be?

Phillips: I know a lot of people say flying but I’ll have to go with it anyway. I’m already jumping out of planes, so why not fly?

Drage: I agree. I think it would be cool to fly too. If I had a super power, it would have to be something that’s both fun and that furthers the good of mankind, and I think flying is a nice balance.

Loh: To not have to sleep. There are just too many things I want to do with my life and not enough hours.

Espinoza: Tele-transport so I could appear in once place and then immediately in another. It would be a nice way to render distance completely meaningless and to experience many things in many places without constraints. In some respects, that’s what we’re trying to achieve with the Windows Phone.