Presidential Cuisine a Focus of Archaeology at Montpelier

Arizona State Museum zooarchaeologist Barnet Pavao-Zuckerman and her students are analyzing the remains of an early American president’s dining table.

Arizona State Museum archaeologists are looking through historic table scraps in an effort to find out more about the kitchen of America’s fourth president and author of the U.S. Constitution.

For about a decade, Barnet Pavao-Zuckerman and her students from the University of Arizona have been part of ongoing excavations at Montpelier, the home of James and Dolley Madison. The archaeology of Montpelier’s grounds offer some light on what day-to-day life was like from the pre-Revolutionary War era to well into the 18th century. 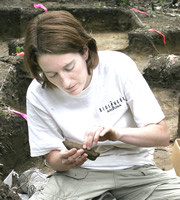 She is collaborating with the Montpelier Foundation on analysis of animal remains – mostly bones – excavated at the estate. These artifacts offer clues about what the Madisons, their guests and their slaves dined on at the time.

Madison’s grandfather, Ambrose Madison, built Mount Pleasant, the first family cabin on a few thousand remote acres at the foot of the Blue Ridge Mountains in northern Virginia in 1723. That was left behind in the 1760s when James Madison Sr. started constructing what would become Montpelier.

When James Madison Jr. moved there at age nine, it was an eight-room brick house. Over time, the family added more rooms, stables and quarters for their slaves.

At the time it was built, Montpelier was essentially on the edge of the U.S. frontier. So there is little surprise that the remains of wild game are present in the excavations, but evidence also shows that domestic animals actually provided most of the meat consumed.

Pavao-Zuckerman said that, over time, Dolley Madison served her family and guests foods associated with a higher status in society, in no small part due to her husband’s growing stature in the new republic. 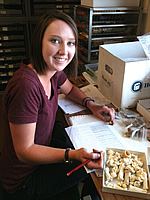 But also the variety of food seems to have decreased during and after Madison’s presidency, due possibly to the economics of feeding large numbers of high-profile guests. Pavao-Zuckerman said Dolley Madison was probably streamlining Montpelier’s cuisine to accomodate large numbers of visitors to the estate.

Less well-understood, she said, is what slaves were consuming then. Recent excavations have unearthed slave quarters that contain large amounts of animal bones, especially sheep.

Marybeth Harte, a UA senior anthropology major, is currently analyzing these and other remains from the site. Harte is one of several UA students who have been working on the more than 10,000 bone fragments collected from Montpelier.

“It’s a great opportunity for them to be involved in such a high-profile archaeology project,” said Pavao-Zuckerman.

“Their work has been critical. I’d never have been able to get through all of this material by myself without them.”

Most of the bones and teeth found at Montpelier are from pigs, although some cattle, sheep and goats also are represented. This is similar to the trash from the Madison home, save for more sheep and goat remains in the slave area.

Wild game animals – mostly squirrels – also were found in the slaves’ trash, suggesting that slaves supplemented their diets with what they caught from hunting, fishing and trapping.

“We actually looked at some zooarchaeological remains from Mount Pleasant, but the trash we examined may have dated to after the Madison’s occupation. After the Madison’s moved out, the structure was used to house ‘retired’ slaves who held favor with the Madison household.

“But, we’re not sure, so the slave quarters may help us to better understand the trash from Mount Pleasant, as well.

The results coming from the slave quarters are still preliminary. Pavao-Zuckerman said she is anxious to find out more about this area and said a more complex picture of Montpelier and its inhabitants is likely to unfold as the work continues.