A new study indicates that mass extinctions affect the pace of evolution, not just in the immediate aftermath of catastrophe, but for millions of years to follow. The study’s authors, University of Chicago’s Andrew Z. Krug and David Jablonski, will publish their findings in the August issue of the journal Geology.

Scientists expected to see an evolutionary explosion immediately following a mass extinction, but Krug and Jablonski’s findings go far beyond that.

“There’s some general sense that the event happens, there’s some aftermath and then things return to normal,” said Krug, a research scientist in geophysical sciences at UChicago. But in reality, Krug said, “Things don’t return to what they were before. They operate at a different pace, sometimes more rapidly, other times more slowly. Evolutionary rates shift, and that shift is permanent until the next mass extinction.”

Krug and Jablonski’s suggestion that the potential for rapid speciation and expansion of survivors and new groups of organisms in the “emptier” world following a mass extinction “is a reasonable possibility as one source of rate change,” said paleontologist Richard Bambach of the Smithsonian Museum of Natural History, who was not directly involved in the UChicago study.

The long-term evolutionary patterns of species diversification following mass extinctions are poorly understood. Paleontologists have extensively debated whether diversity has increased over the last 251 million years, which followed the most devastating mass extinction in Earth history, Bambach said. 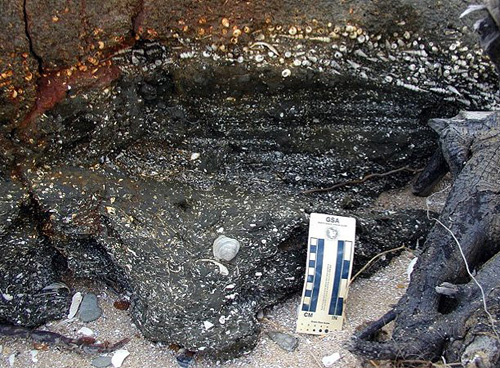 Scientists have been putting Latin names on fossils since 1758, often inconsistently. Methods and tools have changed with the times, but old names often remain. The UChicago paleontologists have combed through seemingly endless volumes of research papers and countless museum drawers in an ongoing attempt to standardize these classifications.

For their Geology study, Krug and Jablonski analyzed contemporary groups of organisms from the end of the Pleistocene Epoch, which ended approximately 10,000 years ago, to the Jurassic Period, which began approximately 200 million years ago. The availability of globally abundant data on bivalves, a group that includes clams, oysters and scallops, set the study’s time boundaries.

“With some groups, like sea urchins or corals, you just couldn’t do it because the numbers aren’t big enough,” said Jablonski, the William R. Kenan Jr. Distinguished Service Professor in Geophysical Sciences.

When he and Krug statistically plotted the origination rate of new bivalve species at 50 million-year intervals, they found that all the species evolved at a fairly steady rate for millions of years. Then the bivalve groups show a sudden increase or decrease in the rates at which new species evolved. These sudden shifts marked the occurrence of a mass extinction. “They settle back down to a different rate from what was before, and they do it multiple times, corresponding to each mass extinction,” Jablonski said.

Theoretically, the origination rates of the organisms might have “been all over the map,” with evolutionary rates varying in a random or chaotic style, but they didn’t. “It’s surprising how organized the pattern is,” he said.

Krug and Jablonski’s perspective of the data is somewhat different from Bambach’s. These perspectives are “not contradictory, but complementary, ways of looking at the data,” Bambach said. “One of the valuable things about their work is that they record the pattern and pattern change during intervals that I lump together.”

Bambach bases his work on older data compilations that include the animal kingdom as a whole, while Krug and Jablonski use their new, carefully vetted data from bivalve mollusks.

“There’s been a lot of talk about the evolutionary role of mass extinctions, but it’s like the weather. Everyone talks about it, but no one does much about it,” Jablonski joked.

“No one has really thought about it in terms of these downstream dynamics, once the smoke has cleared and ecosystems have found a new equilibrium, for want of a better word. But the wonderful thing is that when they find a new equilibrium, it’s a different evolutionary pace from the one that prevailed for the preceding 50 million years. The survivors of the mass extinction, or the world they inherited, is so different from what went before that the rate of evolution is permanently changed.”

In 1978, Raup published a method for determining the extinction rate of organisms. His method involved monitoring the survivorship of a group of organisms that had all originated during a specific time period and quantifying when they disappeared. It would be like collecting census data for all individuals born on Jan. 1, 1899, tracking their longevity, then finding that the 1918 influenza epidemic had produced a spike in this group’s mortality.

Foote followed up in 2001, showing that Raup’s method worked equally well for determining origination rates as it did for extinction rates. One simply needed to use the method in reverse, tracking the time since origination of a group of co-occurring lineages as opposed to the time until extinction. Now comes Krug and Jablonski’s latest study, finding that the evolutionary “birth rate” was also reset at major catastrophes. “It’s very Chicago-esque,” Jablonski said.