Phil Howard, assistant professor of community, agriculture, recreation and resource studies, and Kirk Goldsberry, assistant professor of geography, conducted their research in Lansing. They found that many supermarkets have closed their stores that serve urban areas and have moved to the suburbs. They also showed that Michigan’s state capital is a model for what’s happening to food environments around the country.

“The change in food environments is recurring all over the nation,” said Howard, whose research is supported by MSU’s AgBioResearch. “The best selection of produce and the lowest prices have moved to the suburbs. So if you want lettuce in Lansing, or in most U.S. cities, you’re going to have to drive to get it.” 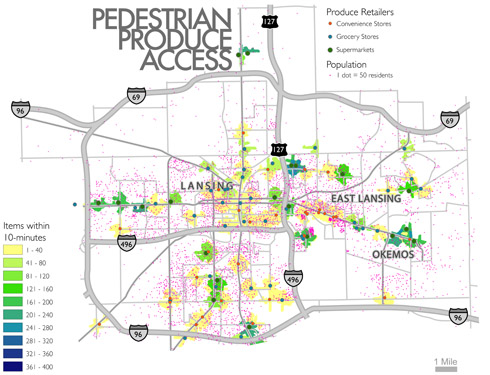 One aspect on which the study focused was store locations. It showed that less than 4 percent of the population lived within a 10-minute walk of a supermarket. The researchers also looked at the cost in reaching those stores as well as the availability of produce at each retail location. They took into account everything from urban party stores, which may offer lemons and limes, to suburban box stores, which offer nearly 250 different produce items.

By taking actual food inventories and pairing that data with geospatial inputs, the team was able to precisely measure geographic access to produce sections. What was revealed was a tale of two food environments. First, people with cars can overcome many geographical obstacles to obtain fresh produce while pedestrians’ ability to obtain fresh produce is becoming increasingly challenging, Goldsberry said.

“I like to think of it as a nutritional CAT scan at the urban scale,” Goldsberry said. “The Lansing food model definitely favors drivers because the stores with the best selection of produce are furthest from the densest population areas.”

The maps give residents, city officials and community organizations an outreach tool to visualize their food environment. Having a highly detailed method to examine each city’s food environment provides a graphic illustration of areas where produce is abundant and where it’s lacking, Howard said.

“When people see a map, people gravitate to their neighborhood and make a decision about how it stacks up to others,” he said. “They see a high-resolution image of their food environment that literally allows them to point out disparities and geographical challenges in their communities.”