REDMOND, Wash. — March 3, 2011 — This week’s edition of Businessweek includes a story about the shift taking place in the development and deployment of applications and services by using cloud computing to cut costs, streamline IT management and respond more quickly to changes in end-user demand. Microsoft is cited as one of the companies taking the lead in this area and in moving organizations from their existing operations and services to the cloud and taking advantage of increased efficiency and new opportunities along the way.

To be sure, the economic gains that are possible through cloud computing are significant – one customer saw a reduction in IT management costs by three-quarters, in part from moving to Windows Azure. But cloud computing has the potential to expand beyond the realm of budget line items to that of lines of software code, creating new tools and services that lead to new computing experiences, expanded business opportunities, better services for customers, and, ultimately, new jobs and economic growth.

Minnesota-based 3M is perhaps best known for its ubiquitous Post-it products, but since being founded in 1902, the company has developed more than 40 different technology platforms through a commitment to scientific research. And 3M has more than 7,000 employees who are dedicated solely to research in a range of areas. 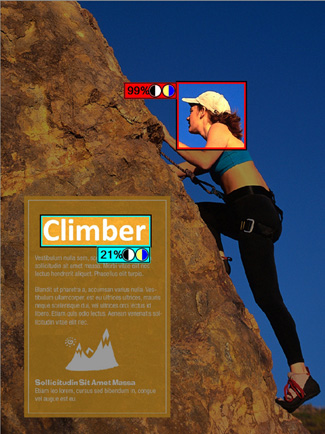 3M’s Visual Attention Service (VAS) is a Web-based scanning tool that digitally evaluates the impact of creative and graphic designs and provides a map to help guide the design process. 3M made the VAS globally available to its customers by hosting it on Microsoft’s Windows Azure platform. Image credit: Microsoft

For example, 3M vision scientists have studied how the human brain processes visual information. Out of that they developed complex algorithms for predicting what a person will notice in a visual scene. 3M has since used this work on a variety of products, such as reflective materials used in roadway and emergency exit signage.

Marketing manager Terry Collier knew that outside of 3M, graphic designers and marketing professionals spend numerous hours creating, honing and optimizing their images without truly knowing how people will perceive their design when it’s finished. 3M’s algorithms had the potential to introduce a more scientifically-based and iterative approach into the design process that could help customers in the design industry deliver more effective results.

“We needed to be able to provide designers with access to this information directly from their computer desktop, multiple times throughout the design process, so they could alter their designs in direct response to the analyses, rather than engaging in lengthy focus group sessions that happen after a design reaches a near final state of completion,” says Collier.

To this end, 3M developed the prototype for a Web-based application called the Visual Attention Service (VAS) that enabled designers to test the effectiveness of their content. Users could upload images to the VAS, and the application’s processing engine would evaluate and return a map of the image, which indicated the areas most likely to attract a viewer’s attention.

To be a viable business offering, 3M knew that the VAS had to be available to customers in real time, be capable of processing images and returning near-immediate results, and of rapidly scaling its capacity during peak design times.

The company believed cloud computing would be the most cost effective approach, and after evaluating offerings from several vendors 3M chose Microsoft’s Windows Azure platform. 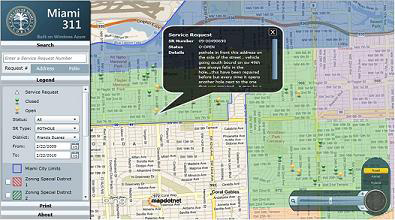 The City of Miami created a Web application that would complement its non-emergency phone service and help recruit citizens to identify needs within the community. Image credit: Microsoft

According to 3M technical manager Jim Graham, the similarities between Windows Azure and the company’s existing development environment gave 3M a “huge advantage” and made the decision “easy.”

By leveraging the Windows Azure platform, 3M is providing users with near-immediate response times – even during peak load times when the application is inundated with high traffic. Most importantly, 3M is delivering a new technology that could change the design process paradigm, especially in areas where success hinges on a viewer’s response to a particular scene.

Adding Value Through the Cloud

Microsoft general manager Tim O’Brien points to 3M as an excellent example of the potential of cloud computing – not merely to outsource data management and processing capabilities, but also to leverage it as a platform for monetizing a company’s intellectual capital and provide customers with access to new services and capabilities.

“The cost savings of cloud computing have been well documented, and there’s no arguing about the amazing impact this can have on a business’ ability to perform and respond,” says O’Brien. “But the truly exciting part comes when you consider the ability of the cloud to deliver services that were never before possible, or to apply huge scale analytics to mountains of data.”

Rather than being a separate component, O’Brien considers the off-premises datacenter – a hallmark of the cloud – to be an essential part of a company’s compute environment. This mindset has been a guiding principle for Microsoft in conceptualizing and developing the company’s cloud portfolio, which includes Windows Azure, Office 365, and numerous other products. O’Brien suggests that this approach has allowed Microsoft’s developers, partners and customers to use the company’s cloud offerings as a platform for delivering more value to their customers.

This was exemplified by 3M – a company best known for its innovative consumer and industrial products – when it delivered a valuable application to customers around the world, without shouldering the costs normally associated with bringing a software application to market.

The combined flexibility and cost-effectiveness of Microsoft’s cloud solutions has enabled customers to rethink the possible and create innovative solutions. Consider the City of Miami. 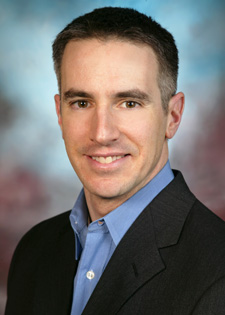 In three years, Miami’s IT department fell from 104 personnel to only 80, and by February 2010 the IT budget was cut by 18 percent. Furthermore, overall reductions in municipal services led to a sharp increase in requests fielded by IT from other departments.

It was critical that Miami maintain the same level of service and stability, and citizens were a valuable resource in identifying issues that needed to be addressed – such as potholes, illegal dumping or missed garbage collection. To this end, the city’s IT department developed and implemented a Web application that helped engage citizens and enabled them to track service requests online and to see other requests in their area.

The IT department was unsure whether the city’s servers had the load and computing power necessary to handle new mapping applications necessary for the new application. And they could only procure new servers every five years, making it difficult to predict server needs. Instead, the city looked at some of the cloud services that were on the market and then moved to the Windows Azure platform.

According to James Osteen, assistant director of IT for the City of Miami, one of the reasons the city went with Windows Azure is the pay-as-you-go pricing model, which it found attractive in light of the budget challenges the city faced. “The pricing model is easy to understand and calculate, which was a huge advantage over other cloud offerings,” says Osteen.

With Windows Azure, the city can eliminate much of its need to procure, host and manage its own physical servers – representing a 75 percent savings in the first year over hosting the 311 application on premises. In addition, the city does not need to redirect valuable developer resources or hire additional staff to deploy and manage server infrastructure. This is in addition to Azure enabling the city to develop the 311 service to act as a 24-hour call center for all City of Miami services.

Cost savings such as this may be part of the reason Microsoft’s cloud computing platform has been adopted by more than 190 state and local government customers in nearly every U.S. state, as well as federal agencies such as the USDA, NASA and the Army.

In the case of the City of Miami, moving to the Windows Azure platform opens the door for the IT department to continue enhancing existing services and develop new services for citizens – including the ability to for users to submit service requests with photos, a global positioning system location, and a description of what is needed, directly from their smart phone.

Says Osteen: “With Windows Azure, we’re relying on a trustworthy solution to make things simpler for our organization. We don’t have to worry about managing a costly infrastructure and can focus on delivering new services that positively impact citizens and our organization.”

Visit the Cloud Computing Newsroom to find out more about Microsoft’s offerings.