Mammalian Brain Knows Where It’s at

A new study in the journal Neuron suggests that the brain uses a different region than neuroscientists had thought to associate objects and locations in the space around an individual. Knowing where this fundamental process occurs could help treat disease and brain injury as well as inform basic understanding of how the brain supports memory and guides behavior.

PROVIDENCE, R.I. [Brown University] — Where are you?

Conventional wisdom in brain research says that you just used your hippocampus to answer that question, but that might not be the whole story. The context of place depends on not just how you got there, but also the things you see around you. A new study in Neuron provides evidence that a different part of the brain is important for understanding where you are based on the spatial layout of the objects in that place. The finding, in rats, has a direct analogy to primate neuroanatomy.

“Understanding how and where context is represented in the brain is important,” said study senior author Rebecca Burwell, professor of psychology and neuroscience at Brown University. “Context, or the place in which events occur, is the hallmark of episodic memory, but context is more than a place or a location. This room, for example, has a window, furniture, and other objects. You walk into a room and all that information helps you remember what happened there.”

Pinpointing where the brain puts together objects and places to form a context could also matter for treating traumatic brain injuries or neuropsychiatric diseases, such as schizophrenia and depression, that involve that part of the brain, said Burwell, who is also affiliated with the Brown Institute for Brain Science.

“We know that contextual representations are disrupted in mental disorders, particularly schizophrenia and depression,” Burwell said. “Individuals with these disorders have trouble using context to plan actions or choose appropriate behaviors.” 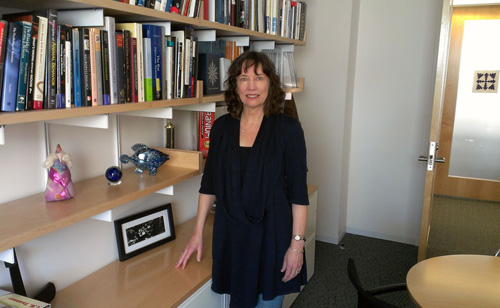 A place for everything. Door open left rear; table left; glass fish on first shelf: In rats, the postrhinal cortex keeps track of places and objects and sends other parts of the brain vital positioning information. “The POR,” Rebecca Burwell says, “is not just a relay station for spatial information.” Image credit: David Orenstein/Brown University

Part of the funding for the study came from a defense department grant aimed at laying the basic neuroscience framework for ultimately repairing traumatic brain damage.

The particular region of Burwell’s interest is called the postrhinal cortex, or POR, in rats. It is directly analogous to the parahippocampal cortex, or PHC, in primates including humans. Neuroscientists already credit the POR, and the PHC, with a significant role in encoding spatial context, mainly by providing spatial information to the hippocampus (“There is a wall five feet to the left”), but they have presumed that another brain region, the perirhinal cortex (PER), provides the hippocampus with information about objects (“I see a fish sculpture”).

“The dogma is that this spatial and nonspatial information is segregated,” Burwell said. That is, until those two streams of information are finally integrated by the hippocampus (“The fish sculpture is on the left-hand wall shelf.”).

But previous research has shown that the PER and POR talk directly to each other. Also, damage to either of those brain regions results in rats that become confused about context. For those, and other reasons, Burwell’s team hypothesized that the POR links objects to places to encode spatial context upstream of the hippocampus.

That object in that place

To find out, the authors surgically inserted electrodes near dozens of POR neurons in each of five rats. The rats were trained to perform a series of experimental tasks in a simple bowtie-shaped “maze.” Each time, they had to choose between a pair of images (objects) projected into two corners (places) of the maze floor. When the rats moved to the “correct” object, they were rewarded with sips of 2% fat chocolate milk.

The researchers found that neurons in the POR responded in patterns of electrical activity, or “spiking,” not only when the rats looked at objects or scurried to places, but also when specific objects (like one associated with a reward) turned up in specific places. That is, neurons often spiked when a particular object appeared in a particular corner.

The rats even exhibited a specific neural response for “egocentric” movements. In other words, the rats’ POR neurons didn’t just account for object location in an objective “this side of the maze or that side” sense, but also for a self-specific “on my left or on my right” basis, indicating that the POR considers space relative to the self, regardless of where a particular object might be in the room.

“It was a surprise to see this whopping theta in the POR,” Burwell said.

Theta rhythm was particularly strong when rats chose an unrewarded object. Burwell said that indicates the POR may be responsible for telling other parts of the brain when the wrong choice of object and place has been made.

“The POR,” Burwell said, “is not just a relay station for spatial information.”

It appears to be much more.