Magma in Earth’s Mantle Forms Deeper Than Once Thought

The scientists found that the rock can and does liquify, at least in small amounts, at pressures equivalent to those found as deep as 250 kilometers down in the mantle beneath the ocean floor.

He is the lead author of a paper that appears on January 9, 2013, in the journal Nature. The research was funded by the National Science Foundation (NSF). 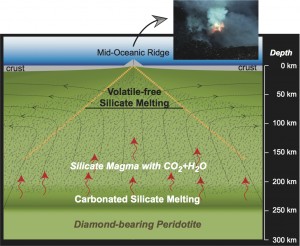 “The results show that in some parts of the Earth, melting, or magma formation, happens very deep beneath Earth’s surface,” said geologist Jennifer Wade, a program director in NSF’s Division of Earth Sciences, which funded the research.

“It also means that some carbon dioxide and water could come from different sources–and deeper within the Earth–than we believed.”

The mantle is the planet’s middle layer, a buffer of rock between the crust–the top five miles or so–and the Earth’s core.

If one could compress millions of years of observation of the mantle to mere minutes, the mantle would look like a rolling mass of rising and falling material.

This slow but constant churning convection brings materials from deep within the Earth to the surface, and higher, through volcanic eruptions. 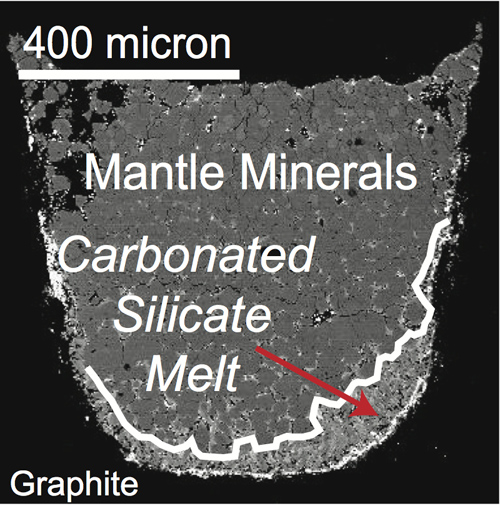 The team focused on the mantle beneath the ocean because that’s where crust is created and where, Dasgupta said, “the connection between the interior and surface world is established.”

Magma rises with convective currents, then cools and spreads out to form ocean-floor crust.

The starting point for melting has long been thought to be at 70 kilometers beneath the seafloor.

That had confounded geologists who had suspected, but could not demonstrate, the existence of deeper magma, said Dasgupta.

For example, when scientists try to determine the mantle’s density, they do so by measuring the speed of a seismic wave after an earthquake, from its origin to other points on the planet.

Because such waves travel faster through solids (e.g., crust) than through liquids (e.g., magma), geologists had been surprised to detect waves slowing down, as though passing through liquid, in a zone that should be the mantle’s faster “express lane.”

“Seismologists have observed anomalies in velocity data as deep as 200 kilometers beneath the ocean floor,” Dasgupta said.

“It turns out that trace amounts of magma are generated at this depth, which would potentially explain that” slower velocity. 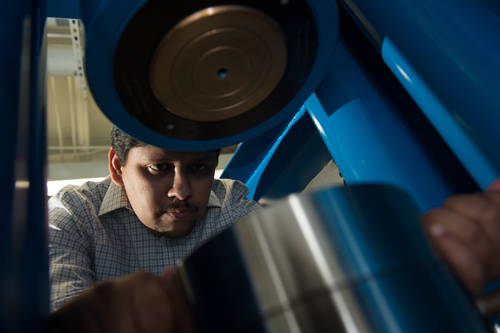 The research also offers clues to the electrical conductivity of the oceanic mantle.

“The magma at such depths has a high enough concentration of dissolved carbon dioxide that its conductivity is very high,” Dasgupta said.

But, because scientists have not yet been able to sample the mantle directly, researchers have had to extrapolate from the properties of rocks carried up to the surface.

So, in a previous study, Dasgupta determined that melting in Earth’s deep upper mantle is caused by the presence of carbon dioxide.

“This deep melting makes the silicate differentiation [changes in silicate distribution that range from the dense metallic core, to the less-dense silicate-rich mantle, to the thinner crust] of the planet much more efficient than previously thought,” Dasgupta said.

“Deep magma is the main agent that brings all the key ingredients for life–water and carbon–to the surface of the Earth.” 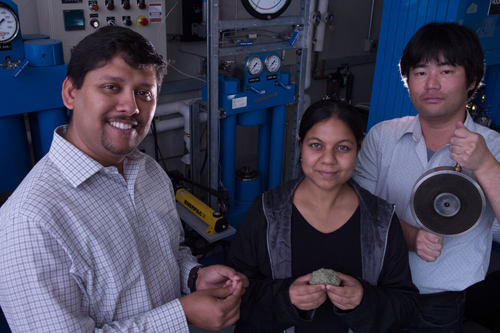 In Dasgupta’s high-pressure lab, volcanic rocks are windows to the planet’s interior. The researchers crush tiny rock samples that contain carbon dioxide to find out how deep magma forms.

“We have all the necessary tools to simulate very high pressures–to nearly 750,000 pounds per square inch–and temperatures,” he said. “We can subject small amounts of rock to these conditions to see what happens.”

The geologists use powerful hydraulic presses to partially melt rocks that contain tiny amounts of carbon, simulating what they believe is happening under equivalent pressures in the mantle.

“When rocks come from deep in the mantle to shallower depths, they cross . . . the solidus [boundary], where rocks begin to undergo partial melting and produce magmas,” Dasgupta said.

“Scientists knew the effect of a trace amount of carbon dioxide or water would lower this boundary, but our new estimation made it 150-180 kilometers deeper from the known depth of 70 kilometers,” he said.

“What we are now saying is that with just a trace of carbon dioxide in the mantle, melting can begin as deep as around 200 kilometers.

“When we incorporate the effect of trace water, the magma generation depth becomes at least 250 kilometers.”

The extent of magma generation is larger than previously thought, he said, and, as a consequence, has the capacity to affect the geophysical and geochemical properties of the entire planet.

Co-authors of the paper are Ananya Mallik and Kyusei Tsuno at Rice University; Anthony Withers and Marc Hirschmann at the University of Minnesota; and Greg Hirth at Brown University.

The study was also supported by a Packard Fellowship to Dasgupta.