Contrary to some previous, highly publicized, reports, ocean acidification is not likely to worsen the hearing of whales and other animals, according to a Woods Hole Oceanographic Institution (WHOI) scientist who studies sound propagation in the ocean.

Tim Duda, of WHOI’s Applied Ocean Physics & Engineering Department, undertook a study in response to warnings that as the ocean becomes more acidic—due to elevated levels of atmospheric carbon dioxide (CO2)–noise from ships will be able to travel farther and possibly interfere with whales and other animals that rely on sound to navigate, communicate, and hunt. 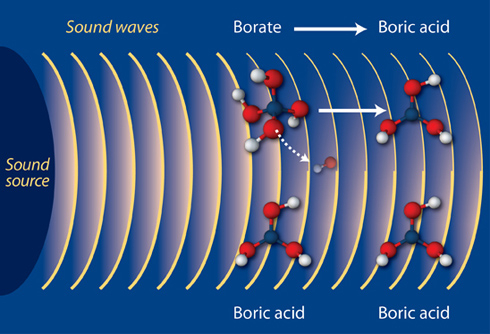 About the image: Low-frequency sound waves in the ocean cause borate to lose an -OH group and become boric acid (top). In the process, the sound waves lose energy. An identical sound wave has no effect on boric acid (bottom). More-acidic conditions reduce the amount of borate in seawater, which led some researchers to suggest that ocean acidification will lead to less absorption of sound energy, allowing sound waves to travel farther in the ocean than they do at present. WHOI scientists showed that the effect will be minimal. Image credit: Jack Cook, Woods Hole Oceanographic Institution

Duda and WHOI scientists Ilya Udovydchenkov, Scott Doney, and Ivan Lima, along with colleagues at the Naval Postgraduate School, designed mathematical models of sound propagation in the oceans.

Their models found that the increase would be, at most, 2 decibels by the year 2100—a negligible change compared with noise from natural events such as storms and large waves. Noise levels are predicted to change even less than this in higher-noise areas near sources such as shipping lanes, Duda said.

Their work is published in the September 2010 issue of the Journal of the Acoustical Society of America.

The story appears in the current on-line issue of WHOI’s Oceanus Magazine.