Computer simulations could help scientists make sense of a recently observed and puzzling wrinkle in one of nature’s most important chemical processes. It turns out that calcium carbonate — the ubiquitous compound that is a major component of seashells, limestone, concrete, antacids and other naturally and industrially produced substances — may momentarily exist in liquid form as it crystallizes from solution.

“Our simulations suggest the existence of a dense liquid form of calcium carbonate,” said co-corresponding author Adam Wallace, an assistant professor of geological sciences in UD’s College of Earth, Ocean, and Environment who conducted the research while a postdoctoral researcher at the Lawrence Berkeley National Laboratory. “This is important because it is an as-yet unappreciated component of the carbon cycle.” 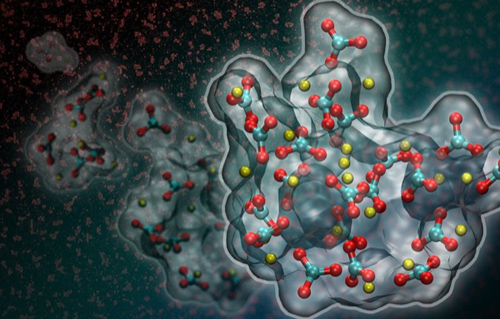 Artistic rendition of liquid-liquid separation in a supersaturated calcium carbonate solution. New research suggests that a dense liquid phase (shown in red in the background and in full atomistic detail based on computer simulations in the foreground) forms at the onset of calcium carbonate crystallization. (Image credit: Berkeley Lab)

The research, “Microscopic Evidence for Liquid-Liquid Separation in Supersaturated CaCO3 Solutions,” is published in the Aug. 23 issue of the journal Science.

The prediction of a dense liquid phase during the conversion of calcium carbonate to a solid could help scientists understand the response of marine organisms to changes in seawater chemistry due to rising atmospheric carbon dioxide levels. It could also help them predict the extent to which geological formations can act as carbon storage reservoirs, among other examples.

The research may also reconcile some confounding experimental observations. For more than a century, scientists believed that crystals nucleate from solution by overcoming an energy barrier. But recent studies of calcium carbonate revealed the presence of nanoscopic clusters which, under certain conditions, appear to circumvent the barrier by following an alternative aggregation-based crystallization pathway. 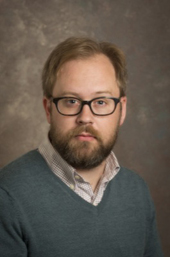 The researchers used molecular dynamics simulations to study the onset of calcium carbonate mineralization. The simulations predict that in sufficiently supersaturated calcium carbonate solutions, nanoscale dense liquid droplets can spontaneously form. These droplets then coalesce to form an amorphous solid prior to crystallization.

The findings support the aggregation-based mechanism of calcium carbonate formation. They also indicate that the presence of the nanoscale phase is consistent with a process called liquid-liquid separation, which is well known in alloys and polymers, but unexpected for salt solutions.

“This research provides a means of explaining the unusual presence of nanoscale clusters in solution within the context of established physical mechanisms,” Wallace said.

The research was supported by the U.S. Department of Energy’s Office of Science through the Energy Frontier Research Center program established in 2009.