Lighting the Way to a Fast, Low-power Optical Transistor

COLLEGE PARK, Md. — There has been enormous progress in recent years toward the ability to use light beams instead of, or together with, electrons in computers. Now, researchers at the Joint Quantum Institute (JQI) — a University of Maryland-based collaboration between UMD and the National Institutes of Standards and Technology — have developed a light-based switch that is a major advance toward the creation of an optical equivalent of the transistor, the centerpiece of most electronic gear.

UMD and JQI scientist Ranojoy Bose, says their new optical switch is not quite an optical transistor yet, but that their new results — which will be published in an upcoming issue of the journal Physical Review Letters
— represent a great start toward creating a usable ultrafast, low-energy on-chip signal router. “Our paper shows that switching can be achieved physically by using only 6 photons of energy, which is completely unprecedented. This is the achievement of fundamental physical milestonessub-100-aJ switching and switching near the single photon level,” Bose says

Why, aren’t electrons good enough? Well, nothing travels faster than light, and in the effort to speed up the processing and transmission of information, the combined use of light parcels (photons) along with electricity parcels (electrons) is desirable for developing a workable opto-electronic approach. 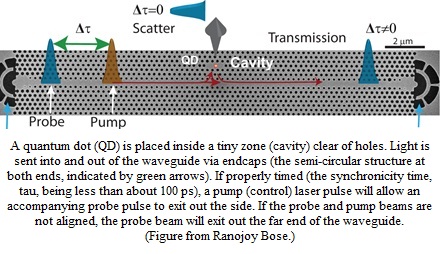 Setup of a waveguide made from a photonic crystal. Image credit: Ranojoy Bose

The transistor is a solid-state component in which a gate signal is applied to a nearby tiny conducting pathway, thus switching on and off the passage of an information signal. The analogous process in photonics would be a solid-state component which acts as a gate, enabling or disabling the passage of light through a nearby waveguide, or as a router, for switching beams in different directions.

The JQI researchers — led by UMD’s Edo Waks, an assistant professor of electrical and computer engineering and JOI fellow — created their all-optical switch using a quantum dot (the equivalent of a gate) placed inside a resonant cavity. The dot, consisting of a nm-sized sandwich of the elements indium and arsenic, is so tiny that electrons moving inside can emit light at only discrete wavelengths, as if the dot were an atom. The quantum dot sits inside a photonic crystal, a material that has been bored with many tiny holes. The holes preclude the passage of light through the crystal except for a narrow wavelength range.

Actually, the dot sits inside a small hole-free arcade which acts like a resonant cavity. When light travels down the nearby waveguide some of it makes its way into the cavity, where it interacts with the quantum dot. And it is this interaction which can transform the waveguide’s transmission properties. Although 140 photons are needed in the waveguide to produce switching action, only about 6 photons actually are needed to bring about modulation of the QD, thus throwing the switch. 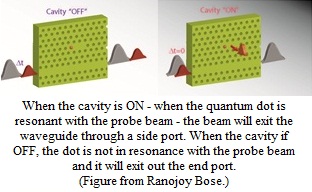 Previous optical switches have been able to work only by using bulky nonlinear-crystals and high input power. The JQI switch, by contrast, achieves high-nonlinear interactions using a single quantum dot and very low power input. Switching required only 90 aJ of power, some five times less than the best previous reported device made at labs in Japan (***), which itself used 100 times less power than other all-optical switches. The Japanese switch, however, has the advantage of operating at room temperature, while the JQI switch requires a temperature of around 40 K.

So, why is this quantum-dot switch not the full equivalent of an “optical transistor”? “Our waveguide-dot setup can’t yet be used to modulate a beam of light using only a weak control pulse of light—what we would call a low-photon-number pulse,” says Bose.

But Bose says he expects an improvement (reduction) in the number of photons needed to switch the resonant cavity on and off.
Already, the JQI (*) switch can steer a beam of light from one direction to another in only 120 picoseconds (120 trillionths of a second), requiring very little power, only about 90 attojoules (90 x 10-18 joules). At the wavelength used, in the near infrared (921 nm), this amounts to about 140 photons.

(*)The Joint Quantum Institute is operated jointly by the National Institute of Standards and Technology in Gaithersburg, MD and the University of Maryland in College Park.