EAST LANSING, Mich. — The world’s rubber supplies are in peril, and automobile tire producers are scrambling to seek alternative solutions.

Tom Sharkey, chairperson of the Michigan State University biochemistry and molecular biology department, believes isoprene, a gas given off by many trees, ferns and mosses, could be a viable option. Some plants use it as a mechanism to tolerate heat stress as opposed to most crops, which stay cool through evaporation. 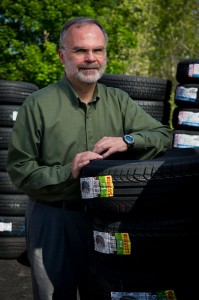 Tom Sharkey, chairperson of MSU's biochemistry and molecular biology department, has developed a method to produce bio-isoprene, which could lead to eco-friendly tires. Photo by G.L. Kohuth

Sharkey’s research team already has measured rates of isoprene emission from plants that are used by the Environmental Protection Agency to predict lower-atmosphere ozone levels. His team also has created models to measure how much isoprene plants release on a global scale. Given the amounts of isoprene made by plants, finding a way to produce a synthetic version for the rubber industry seemed like the next logical step, Sharkey said.

“I’ve found that isoprene research is irresistible,” he said. “Once it was clear how much isoprene trees and plants produce and how biologically produced isoprene could be a key ingredient in making tires, it was natural to wonder if we could produce isoprene on a commercial scale.”

The majority of automobile tires are made of natural rubber from latex-bearing trees. Harvesting rubber from these trees to feed the world’s appetite for tires isn’t sustainable, Sharkey added. Since rubber is made up of isoprene, Sharkey has worked to create a manmade version, bio-isoprene, which can serve as an eco-friendly alternative source for synthetic rubber production.

Other researchers have made isoprene from petroleum to make synthetic rubber. Sharkey’s team, however, is working to produce bio-isoprene using an enzyme he has cloned. With the enzyme, Sharkey has made bio-isoprene using bacteria. Sharkey and his team have partnered with private companies to scale up his research. Ultimately, he hopes this innovative process would take in carbon dioxide and discharge bio-isoprene using only sunlight as an energy source.

“Rubber prices are rising, and the competition for developing synthetic rubber is heating up,” Sharkey said. “This should help lead to effective ways to engineer bio-isoprene and ultimately keep costs low using this renewable alternative source for rubber production.”

Sharkey’s research, which is funded in part by the National Science Foundation, is featured in the current issue of International Innovation.