Jo Varner, University of Utah biology doctoral student, is currently conducting research on how small mammals like Pikas are coping with Earth’s warming climate. Her study is concentrated on Pikas in the Columbia River Gorge area in the U.S, which is an unusual habitat for this species. Recently we had the opportunity to talk to Miss Varner about her research, why it is important and how life as a research scientist is. Here is what we learned from Miss Jo Varner:

Q. Let us start with your research topic. What is your research area? Will you please tell us a bit more on this? What did you find?

Jo Varner: Glad to talk with you! Broadly, I am interested in how climate change is impacting animals, particularly in sensitive environments like the high mountains. Specifically, I am working with American pikas, which are a small mammal closely related to rabbits. Pikas are typically restricted to high elevation mountains in western North America. They appear to be very sensitive to climate change in parts of their range, but in other parts they seem to be less vulnerable.

I am working with a population of pikas that live at low elevations in the Columbia River Gorge, just outside of Portland, Oregon in the US. Here, pikas live near sea level, thousands and thousands of feet lower in elevation than we would expect to find them, based on their sensitivity to aspects of climate. It’s been a mystery for a long time, how these animals are able to survive in this odd habitat.

My results suggest that part of how they’re able to make a living near sea level is by eating an unusual food resource: Moss! Mosses are typically low in protein and high in fiber, so they aren’t a very nutritionally desirable food for mammals. For pikas living here, though, it seems like mosses are really beneficial to consume because it allows the pikas to forage from within the safety and comfort of the rockslides, rather than having to travel to meadows to forage (and be exposed to warm temperatures and predators). In addition, because the moss covers the rockslides where the pikas live and is available all year, these pikas don’t really have to gather and store food to survive the winter, like they do in the high mountains that are under snowpack for 9 months of the year! So, ironically, the low elevation habitats may actually be better off, in terms of food resource, than the high elevation habitats! 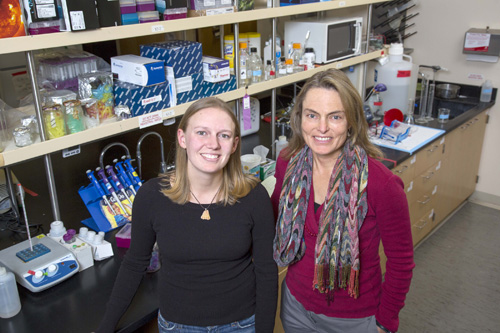 University of Utah biologists Jo Varner and Denise Dearing conducted a study showing that mammals known as pikas, which are related to rabbits and hares, may be more adaptable to climate change than previously believed because they can survive on a diet of high-fiber, low-nutrition moss. Photo Credit: University of Utah Marketing and Communications

Q. Why is this important? (i.e. why should the general public care about this?)

Jo Varner: I think this is a pretty fascinating example of an animal (that usually has very strict requirements in terms of where it can live) figuring out how to make a living in an unusual place. It’s not clear yet, whether my findings have implications for how pikas will cope with climate change, but it does suggest that they can be a lot more flexible than we originally gave them credit for! Finally, I think pikas are just fascinating little creatures – they are industrious, quite clever, and very very cute! 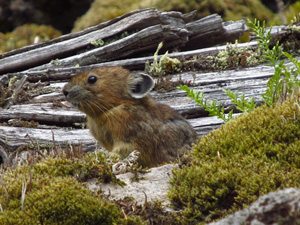 A rabbit relative known as a pika sits among wood, moss and rocks on rockslide or talus slope in Oregon’s Columbia River Gorge. A University of Utah study found the pikas — which normally live at much higher elevations and are threatened by climate change – survive at nearly sea level in Oregon by eating more moss than any other known wild mammal. Photo Credit: Mallory Lambert, University of Utah

Q.  Is this truly new information or does it confirm what other researchers have found?

Jo Varner: Very few people have studied pikas in the Columbia River Gorge before, even though it’s been an open mystery as to why they live there for a long time. There have been a few casual observations that pikas may eat some mosses in this area, but nobody has documented it as comprehensively as we have (>2,000 feeding observations from many many individuals). We basically found that these animals eat more moss than any other mammalian herbivore, which is pretty cool!

Q. How did you land here. Was it your goal?

Jo Varner: No! I actually started out as a molecular biologist as an undergraduate student. I studied cancer genes in C. elegans worms! I then spent a year doing a Master’s in Engineering, designing a device to study how motor neurons in the brain become such specialized cells and make connections with the spinal cord. All of that research meant spending a lot of time in cold, dark rooms by myself. After my master’s, I took some time off. I worked as a baker, I skied a lot, and I spent 6 months picking fruits on organic farms in New Zealand! When I came back, I had this stunning revelation (which had previously not occurred to me) that people do science outside, and it’s called Ecology! I had always loved pikas (from my own hiking and camping), and so I emailed a professor who did her Ph.D. with pikas. She took a chance on me and offered me a job working with hantavirus, a deadly disease carried by mice in the US. When the funding for that project ran out, she offered to support me on a Ph.D. project studying pikas, which by that time had become my dream!  So, here I am – hiking and camping and watching the pikas run around, which is sort of what I would do for fun, left to my own devices!

Q. How many hours a day you spend for study. How you arrange other side of your life like social activities so to say?

Jo Varner: It depends on the season, but graduate school is a lot of work. From about May to September, I spend most of every day doing fieldwork, watching pikas and collecting data. The rest of my life gets pretty much put on hold, except for a few weekends off to see my family. My field crew and I get up at dawn, take a few hours off in the middle of the day when pikas are less active, and then work again in the evening. When I get back to Utah for the rest of the year, I work on analyzing my data and writing up results. This time, I can work more normal hours (8-10 hours/day), so it’s a lot easier to manage the rest of my life!

Q. Are you satisfied with your results? What about your publications?

Jo Varner: I’m very satisfied with my results and publications! But maybe most importantly, I’ve really enjoyed doing the work and I think we’ve discovered some really interesting things about these fascinating animals!

Q. If you would not be at your current profession, what other options would you consider for your career?

Jo Varner: I’ll have to change “professions” when I finish graduate school. I’m really interested in citizen science – getting members of the public out in the mountains and collecting data, learning about how science and research happen, and also contributing really valuable information about ecological changes. I will probably expend to working with other species, but I’m hoping to keep an eye on pikas for a long time!