Lack of oxygen delayed the appearance of animals on Earth

Geologists are letting the air out of a nagging mystery about the development of animal life on Earth.

Scientists have long speculated as to why animal species didn’t flourish sooner, once sufficient oxygen covered the Earth’s surface. Animals began to prosper at the end of the Proterozoic period, about 800 million years ago — but what about the billion-year stretch before that, when most researchers think there also was plenty of oxygen?

Well, it seems the air wasn’t so great then, after all.

In a study published Oct. 31 in Science, Yale researcher Noah Planavsky and his colleagues found that oxygen levels during the “boring billion” period were only 0.1% of what they are today. In other words, Earth’s atmosphere couldn’t have supported a diversity of creatures, no matter what genetic advancements were poised to occur.

“There is no question that genetic and ecological innovation must ultimately be behind the rise of animals, but it is equally unavoidable that animals need a certain level of oxygen,” said Planavsky, co-lead author of the research along with Christopher Reinhard of the Georgia Institute of Technology. “We’re providing the first evidence that oxygen levels were low enough during this period to potentially prevent the rise of animals.” 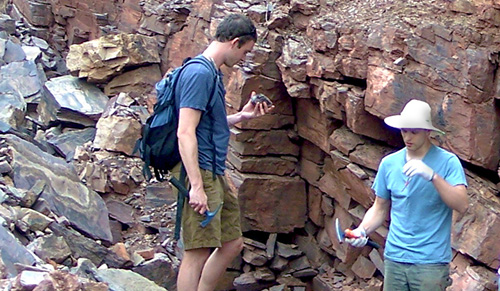 The scientists found their evidence by analyzing chromium (Cr) isotopes in ancient sediments from China, Australia, Canada, and the United States. Chromium is found in the Earth’s continental crust, and chromium oxidation is directly linked to the presence of free oxygen in the atmosphere.

Specifically, the team studied samples deposited in shallow, iron-rich ocean areas, near the shore. They compared their data with other samples taken from younger locales known to have higher levels of oxygen.

Oxygen’s role in controlling the first appearance of animals has long vexed scientists. “We were missing the right approach until now,” Planavsky said. “Chromium gave us the proxy.” Previous estimates put the oxygen level at 40% of today’s conditions during pre-animal times, leaving open the possibility that oxygen was already plentiful enough to support animal life.

In the new study, the researchers acknowledged that oxygen levels were “highly dynamic” in the early atmosphere, with the potential for occasional spikes. However, they said, “It seems clear that there is a first-order difference in the nature of Earth surface Cr cycling” before and after the rise of animals.

“If we are right, our results will really change how people view the origins of animals and other complex life, and their relationships to the co-evolving environment,” said co-author Tim Lyons of the University of California-Riverside. “This could be a game changer.”