REDMOND, Wash. – July 20, 2010 – Microsoft today officially announced the price tag Kinect will have when it hits stores this fall.

Kinect for Xbox 360, which will include the Kinect Sensor and the video game “Kinect Adventures,” will retail for US$149.99 when it launches Nov. 4 in North America, the company revealed. The Kinect Sensor will work with each of the 40 million Xbox 360s currently in households worldwide.

For those who don’t yet have an Xbox but want in on the controller-free experience, Microsoft also announced an all-in-one Xbox 360 Kinect Console Bundle for US$299. The bundle will include the new Xbox 360 4GB console, Kinect Sensor, and “Kinect Adventures.”

Additional games, including “Kinectimals,” “Kinect Sports,” and “Kinect JoyRide,” will retail for US$49 each.

Starting today, consumers can pre-order Kinect for Xbox 360 and the Xbox 360 Kinect Console Bundle at most major retailers. Josh Hutto, director of product marketing for Xbox, said that Kinect represents a great value for new and existing Xbox 360 customers.

“Kinect truly is a revolutionary product,” he said. “We’re bringing controller-free entertainment into the living room. With one purchase, families get Kinect and the most complete and affordable way to have fun.” 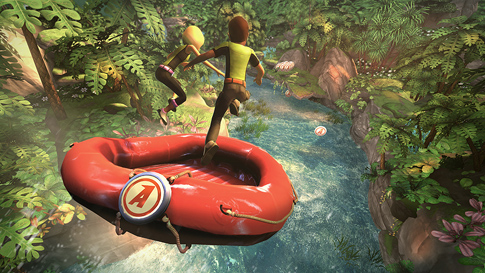 Kinect features video and audio sensors that eliminate the need for a traditional controller. Players use body motions and voice commands to play games, watch movies, and interact with other Xbox LIVE subscribers.

Since Kinect was announced last month at the Electronic Entertainment Expo (E3), the device has generated huge buzz in the media and in cyberspace, Hutto said. To build on that excitement, Microsoft will be taking Kinect out on the road. During the next 14 weeks, the Kinect Experience Tour will be stopping in 32 cities across North America, giving the public a chance to try out the controller-free experience before it hits stores in the fall. The Kinect Experience Tour will also travel internationally, with stops in Europe, Australia, New Zealand, Japan and Mexico.

“For anyone who’s skeptical of Kinect, they change their minds pretty quickly after five or 10 minutes,” said Hutto, who demoed the device for hundreds of consumers at E3. “We’re showing that the only experience you need is life experience. If you know how to kick a ball, you can play these games and have a great time.” 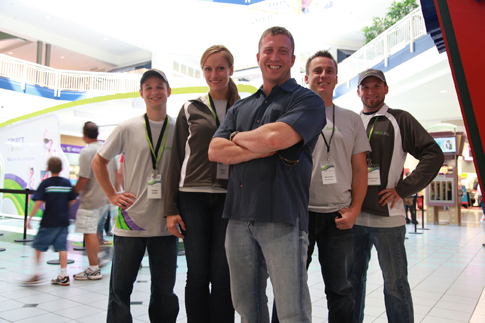 About the image above: Tour Crew Tom Geyer (center), project manager for the Kinect Experience Tour, with his staff at Minnesota’s Mall of America. Image credit: Microsoft.

Tom Geyer, project manager for the Kinect Experience Tour, added that Microsoft wants to excite a set of consumers who might not understand what the hype is all about.

“We’re really focused on bringing this product out to a new audience,” he said. “We’re showing up at fairs and festivals where families are going to be this summer and introducing them to a side of Xbox that they’re not familiar with.”

The tour’s focus on families doesn’t mean that Microsoft is ignoring Xbox’s base, he added. “We know the core gamer will show, and we’ll be ready for them,” he said.

But the Kinect Experience Tour will try to sell Kinect as entertainment for the whole family and invite moms, dads and kids to give it a try. If they enjoy the experience, they will be able to quickly share the fun with friends and family. Visitors to the tour will have the opportunity to share photos and videos captured during gameplay on social networks such as Facebook.

Microsoft hopes first-person testimonials will help spread excitement about Kinect, Geyer said. “If you’re reading any blogs right now, people are saying that they’re hearing a lot of great things about Kinect but they need to see it,” Geyer explained. “That’s why we created these video captures and photo captures and capabilities for people to blog about it as soon as they’ve had the experience.”

At the end of the day, Microsoft wants to get as many as people as excited about Kinect before it launches, Hutto said. There’s one surefire way to do that. “Playing is believing,” he said.