*Bing and JAY-Z are partnering to promote the hip-hop star’s new book, “Decoded.” Bing created a multi-platform search experience and interactive game, where fans can immerse themselves in JAY-Z’s life and lyrics and search for the book’s pages, which are being hidden in the real world.*

The rapper and Bing announced a partnership Monday to promote his upcoming book, “Decoded,” through an interactive game and multi-platform search experience. Before the book hits shelves Nov. 16, Bing will distribute all 350 pages at hidden locations in the real world as well as online through Bing Maps. Fans can go to Bing.com/JAY-Z to crack clues and find and compile the pages, which will be released in batches every day until the book’s release.

“This campaign is designed to be an innovative combination of the hotly anticipated book from a musical icon with the technologies from Bing,” he says. “JAY-Z is excited to offer his fans this inside look at his life, and his publishers claim this campaign will drive one of the boldest book launches in history.”

In the book JAY-Z traces his life from childhood to hip-hop superstardom and describes the hidden meanings behind some of his songs. Over the next four weeks, each of the book’s 350 pages will be placed around the world from Brooklyn to London in locations related to the content. If the rapper describes an incident in Miami, for example, that page will be placed in Miami. 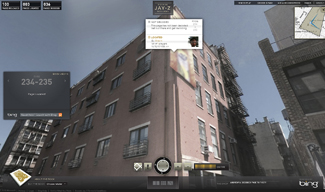 About the image: Each time a fan answers a clue in the online game, the map zooms in to the actual street-level view where the page is located. Image credit: Microsoft

At the “Decode JAY-Z with Bing” site, fans can get clues to the pages’ whereabouts. Using Bing Maps and other Bing technologies, fans can walk the same streets JAY-Z walked and search for the virtual pages. They can then in turn go look for the pages in the real world, where clues will be stashed in hundreds of traditional and nontraditional advertising locations such as pools, pool tables, bronze plaques, and high-fashion clothing racks. By decoding the clues, fans win an opportunity to have that page signed by JAY-Z. More than 200 prizes will be awarded, including one grand prize – a trip to see JAY-Z and Coldplay in concert on New Year’s Eve.

“This experience brings JAY-Z’s life story and music alive on the internet with Bing and Bing Maps,” he says. “Bing helps people make more informed decisions by providing the best search experience for topics that are important to them. This campaign provides an inside look at JAY-Z’s most pivotal life decisions, all discoverable on Bing.”

Several Bing and Microsoft technologies come together to help fans decode JAY-Z’s life and lyrics, but the core of the game is the virtual experience on Bing Maps. With help from Silverlight, Bing Maps lets fans smoothly “walk” around the virtual streets of JAY-Z’s life. “We used Bing Maps and its Streetside imagery to create an entire virtual world around JAY-Z’s life,” says Reed Shaffner, senior product manager for Bing product marketing. “The quality of the experience allows us to bring individuals into the competition that otherwise wouldn’t be able to participate at all and still have them feel like they are really there.”

Fans on the go in the real world will be able to experience the game on any mobile browser, Shaffner says. Rather than build an app for a single platform, the Bing team built the mobile experience on HTML. That means that people on any phone, whether it’s a Windows Mobile phone or an iPhone, will be able to participate in the game.

The Decode site is hosted on Windows Azure, which will allow it to scale up and down based on traffic demand. “With these viral contests, you don’t know how big it’s going to get,” Shaffner says. “With Azure, we don’t have to worry about that.”

Microsoft has worked with JAY-Z before, Cameron says. The relationship began in 2006, when JAY-Z participated in the company’s Strategic Account Summit. The company also sponsored several events he was involved with, such as the Black Ball Charity Concert. Earlier this year, advertising agency Droga5, which works closely with JAY-Z, saw the Bing Maps presentation from the TED conference. They were inspired to combine the creativity of the book with the innovative technology from Bing, he says.

Microsoft hopes that the promotion introduces Bing to new consumers, Hadley says. JAY-Z appeals to many audiences, but he is an iconic figure for many demographics that also are heavy searchers, he says. Microsoft research shows that both Gen Y (people age 18 to 24) and African Americans are much more active searchers online than the general internet population: 18-24 year olds consume 61 percent more search pages online than average, and African-American users view 29 percent more search pages.

“We look forward to reaching these audiences and many other JAY-Z fans through this campaign,” Hadley says. “We continue to make Bing relevant in people’s lives, connecting to pop culture to help them make decisions.”