That will be a respectful decision. Believe me.

I was always wondering about Elizabeth Holmes, and admiration, of course, I had for all what she achieved through her work: a blood-testing technology which is fast and comfortable than the tradional long-needle, founding of Theranos, then a rank in Forbes list. All within 30. That’s marvellous. A big woooow. Itelligent, hard- working and ambitious. And of course, very gifted and lucky. That’s how all my thoughts swirled around the founder of Theranos.

Nevertheless, there was somethiing ambiguous in the whole affair from the very beginning. A tecnology that offers the results just based on few blood drops? Super! But never well explained how? Other than Theranos itself, most people outside have no clear idea on how the technology really works. It’s simply enough to guess, there is something like ‘Area 51’ or 52, a contact base of US Military with the highly developed extraterrestrial beings. Something very secretive. Outsiders should not know. 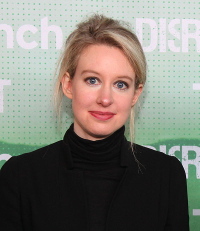 In reality, the whole thing about Elizabeth Holmes and Theranos is shrouded with much exaggeration. Little bit of ‘fairy tale’ type. Theranos uses a device called ‘Edison’ to test the blood taken using a fingerstick. The company was founded in 2003. But since when they are using their tech device Edison for blood testing is not clear to me. If its since the beginning of Theranos, let’s say, then it’s now about 13 years. And it’s quite a long time for such highly modern and developed euipment to take a big portion of the current blood testing market worldwide. But I never heard of anything like this till to-date. Never heard or read any third- world counties, where the Edison device could be the best choice in medicare, buying it or using it. Just imagine how much money these countries could save if the technology would really work.

But in October 2015 Wall Street Journal revealed, that the tech company itself is not using its own technology for all the tests it offers. Why? – could be an accuracy problem, the ‘ground-breaking technology’ is not doing all that ‘super job’ as it claimed to do in tech conferences and tv interviews. Since then the dark clouds started to gather over Theranos. But Miss Holmes could still keep her position as CEO of the company. But how? – I guess, one of the thing that works perfect is ‘lobbying’, which all the giant tech companies do on regular basis, that someway helps them building invisible ‘power-houses’ withing government and in other social, tech or media outlets that work in favour of the lobbying companies.

In addition to this, there comes Silicon Valleys’s many ‘broker’ tech farms and blogs whose holy job is to give their specific targets a ‘hype’, and help rolling things faster on the ground (and may be that’s how Theranos CEO became the ‘Darling of Silicon Valley’).

But now as CMS, Centers for Medicare and Medicaid Services, issued sanctions that includes among others ‘a prohibition on owners and operators of the lab from owning, operating or directing a lab for at least two years’, – it’s really the right time for the CEO Elizabeth Holmes to admit the faults in her ‘ground-breaking technology’, and resign. That would be highly expected.