Those vegetables you had for dinner may have once been protected by an immune system akin to the one that helps you fight disease. Scientists from the U.S. Department of Energy’s Lawrence Berkeley National Laboratory (Berkeley Lab) and the Netherland’s Wageningen University found that plants rely on a complex community of soil microbes to defend themselves against pathogens, much the way mammals harbor a raft of microbes to avoid infections.

The scientists deciphered, for the first time, the group of microbes that enables a patch of soil to suppress a plant-killing pathogen. Previous research on the phenomenon of disease-suppressive soil had identified one or two pathogen-fighting microbes at work.

But the Berkeley Lab-led team found a complex microbial network. After analyzing soil from a sugar beet field that had become resistant to a pathogen that causes root fungus, the scientists found 17 soil microbes fighting to suppress the pathogen. They also determined that all of the microbes work together to reduce the incidence of fungal infection. Their discovery that plants use a tight-knit army of soil microbes for defense could help scientists develop ways to better protect the world’s food crops from devastating diseases.

“Individual organisms have been associated with disease-suppressive soil before, but we demonstrated that many organisms in combination are associated with this phenomenon,” says Gary Andersen of Berkeley Lab’s Earth Sciences Division. He conducted the research with fellow Berkeley Lab scientists Todd DeSantis and Yvette Piceno as well as several scientists from the Netherlands including Wageningen University’s Jos Raaijmakers. Their research is published in the May 5 issue of Science Express.

The Berkeley Lab and Dutch scientists analyzed soil from a sugar beet field in the Netherlands. Something in the soil suppressed the presence of the pathogen Rhizoctonia solani, which causes root fungus in beets, potato, and rice. 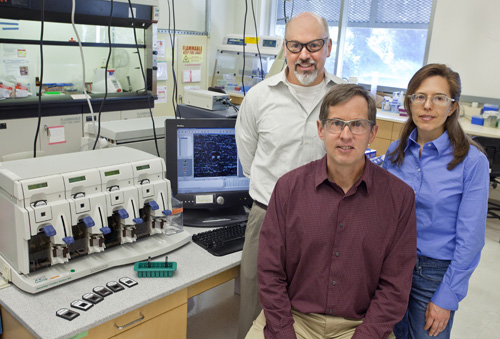 In a development that could lead to better ways to protect food crops from disease, Berkeley Lab scientists unraveled the community of soil microbes that protect sugar beets from root fungus. From left, Todd DeSantis, Gary Andersen, and Yvette Piceno in the lab where much of the research was conducted. Several PhyloChips are on the table next to them. Photo by Roy Kaltschmidt, Berkeley Lab Public Affairs

The sugar beets’ health followed the typical arc of plants in disease-suppressive soil: they enjoyed a few good years, then they succumbed to disease, followed by healthy beets again as pathogen-fighting microbes were activated and the soil became hostile to R. solani. To return the favor, the sugar beets funnel about a fifth of their photosynthetically captured carbon through their roots into the soil to fuel the microbes.

Disease-suppressive soils are quite common, and scientists have identified some of the microbes involved in this underground immune system. But they don’t know all of the microbes that participate.

To find out, the scientists used the PhyloChip, which is a credit-card sized chip that can detect the presence of 59,000 species of bacteria and archaea in samples of air, water, and soil without the need of culturing. It was developed at Berkeley Lab to rapidly identify not only the most common and abundant organisms in an environmental sample, but also very rare types that are present in extremely small numbers. It does this by comparing a DNA sequences unique to each bacterial species with over one million reference DNA targets on the chip. The PhyloChip has shed light on many environmental mysteries, such as what’s killing coral reefs near Puerto Rico and what degraded much of the oil from the Gulf of Mexico’s Deepwater Horizon spill.

In this case, soil samples from the sugar beet field were modified to exhibit six levels of disease suppression. DNA was isolated from the samples and sent to Berkeley Lab for analysis. The PhyloChip detected more than 33,000 bacterial and archaeal species in the samples, with all six having more or less the same types of bacteria.

But when the scientists looked at the abundance of bacteria in each sample, they found that each had a unique fingerprint. All of the samples in which disease was suppressed had a greater abundance of 17 unique types of bacteria. These included well-known fungal fighters such as Psuedomonas, Burkholderia, Xanthomonas and Actinobacteria. In addition, other types of bacteria that have no demonstrated ability to fight pathogens on their own were found to act synergistically to suppress plant disease.

Based on this, the scientists believe that an uptick in several bacterial types is a more important indicator of disease suppression than the presence of one or two bacteria that are especially good at killing pathogens.

“We now see that the complex phenomenon of disease suppression in soils cannot simply be attributed to a single bacterial group, but is most likely controlled by a community of organisms,” says Andersen.

Their research will help scientists pursue unanswered questions about disease-suppressive soil: Do plants actively recruit beneficial soil microorganisms for protection against infection? And if so, how do they do it? It will also help scientists elucidate the mechanisms by which groups of soil microbes work together to reduce the incidence of plant disease.

The research was supported in part by the California Environmental Protection Agency’s State Water Resources Control Board and the Rathmann Family Foundation.