“There is a tendency in the West to stay ignorant to what Islam stands for,” noted Ryan Crocker, a former U.S. ambassador who is currently senior fellow at Yale’s Jackson Institute for Global Affairs, speaking at a panel held in Istanbul on Feb. 21.

The panel, which focused on issues that impact the West’s interests in the Middle East, was held in cooperation with Boğaziçi University–TÜSİAD Foreign Policy Forum. Crocker — who served in many countries including Iraq, Afghanistan, and Pakistan — was one of three senior fellows from the Jackson Institute to share their insights with the assembled guests.

The other speakers from Yale were Emma Sky, an international activist who has worked at senior levels on behalf of the U.S. and U.K. governments in Iraq, Afghanistan and Jerusalem across the fields of development, defense, and diplomacy; and Lt. General Graeme Lamb, a retired British Army officer with 38 years of experience and a former commander of the Field Army.

Hakan Yılmaz, director of Boğaziçi University–TÜSİAD Foreign Policy Forum, opened the panel with a speech on the historical background of the West’s relations with the Middle East. Jim Levinsohn, director of Yale’s Jackson Institute for Global Affairs, moderated the panel discussion, which touched on the conflict in Syria, Arab Spring, and the perception of America in the Middle East. 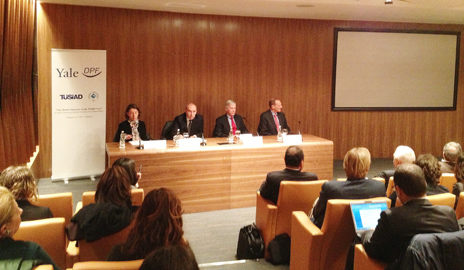 The audience included leading members from the TÜSİAD Foreign Policy Forum, DEİK (the Foreign Relations Economic Board of Turkey), and Marmara Group Foundation, which studies global issues such as the economy, administration, security and defense. Also in attendance were professors and students from Boğaziçi University and other higher education institutions. The event also provided an opportunity for a select group of students from Robert College, a private high school in Turkey, and Üsküdar American Academy to participate in the discussion. Students from each school were selected based on their interest in global affairs and academic achievements.

Student Deniz Tanyolac from Üsküdar American College said, “I was really impressed by the panel. It is obvious that they are experts in their areas. I wish the panel would go on and that we could have the chance to listen to them for hours.”

The Jackson Institute for Global Affairs is a major contributor to Yale’s efforts to internationalize its teaching curriculum, to attract the most talented students and scholars to Yale from around the world, and to deepen the University’s engagement abroad. The home of the undergraduate major in global affairs and the master’s program in international relations, the institute’s mission is to lead in the teaching of global affairs throughout the University, and to inspire and prepare students for global leadership and service.