After Stephanie Guzman graduated from the University of Delaware’s College of Education and Human Development in 2001 as an early childhood education major, her first position was as a second grade teacher at a Title I school.

While Title I schools are designed to improve the academic proficiency for children from disadvantaged areas, Guzman found her students had character issues that needed to be addressed as well.

“The students had poor communication skills. They were always ready to fight each other, but never ready to talk it out,” Guzman said.

She searched her school’s library and other libraries nearby, hoping to find a book she could use to connect with her students. When her search proved fruitless, she decided to take matters into her own hands.

Guzman has developed a children’s book series, The Adventures of Oliver the Clownfish, designed to address the social issues of young students. 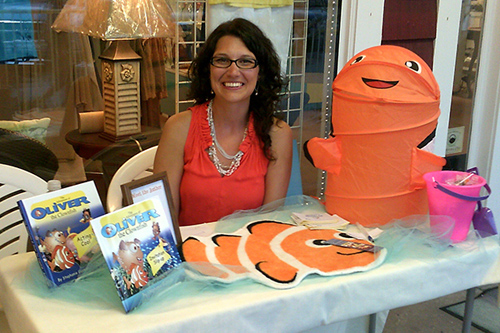 Stephanie Guzman, a UD alumna, is writing a series of children’s books called “The Adventures of Oliver the Clownfish” to help children deal with typical challenges in their lives. Image credit: University of Delaware

The Invitation Slip-Up was the first book Guzman wrote following her first year of teaching. She used an event from her own childhood, a miscommunication involving a party invitation lost in a backpack, to inspire her work. Her second book, Acting Cool, was released in 2008.

Guzman said the most difficult thing about writing for children is covering a range of ages from kindergarteners to fifth graders. The language needs to be easy enough for the younger children to understand, but the content must also keep the older kids interested.

“The fourth and fifth graders don’t completely enjoy me reading a picture book to them,” Guzman said. “But, all of the issues that are going on in the book are still things that they can relate to.”

Her third book, being released in May 2013, is called Sticky Fins and tells the story of a fish that takes things that don’t belong to him.

“That’s another topic, stealing, that I just couldn’t find a lot of books about. I needed a way to teach the kids that stealing is not right, and offer guidance as to what they should do if they have a friend that steals or a friend who’s asking them to steal,” Guzman explained.

Guzman plans to release a total of five books in the series. She said it takes about a year of constantly reviewing and revising her work in order to release it, but she needs to squeeze that time in between her full-time position as a reading specialist at Magnolia Elementary School and raising her young daughter.

To help make her students more well-rounded, Guzman also encourages them to participate in extracurricular activities with her. As a lifelong fan of musicals, she coordinates a musical theatre after-school program, giving them the chance to sing, dance and learn.

“These kids don’t have a lot of experience with that kind of thing, nor do they really get a chance to go and actually see what a musical is,” she said. “I’m trying to provide something that I really enjoy doing into the lives of the students who might not get that experience elsewhere.”

To learn more about her Guzman’s book series, The Adventures of Oliver the Clownfish, or to invite her to speak at your school, visit her website.