University of Chicago physicists have succeeded in creating a vortex knot—a feat akin to tying a smoke ring into a knot. Linked and knotted vortex loops have existed in theory for more than a century, but creating them in the laboratory had previously eluded scientists.

Vortex knots should, in principle, be persistent, stable phenomena. “The unexpected thing is that they’re not,” said Dustin Kleckner, a postdoctoral scientist at UChicago’s James Franck Institute. “They seem to break up in a particular way. They stretch themselves, which is a weird behavior.”

This behavior culminates in what the UChicago researchers call “reconnection events.” In these events, the loops elongate, begin to circulate in opposite directions, move toward each other and collide (the reconnection). Parts of the vortices then annihilate other parts, changing their configuration from linked or knotted into one that is unlinked or unknotted. 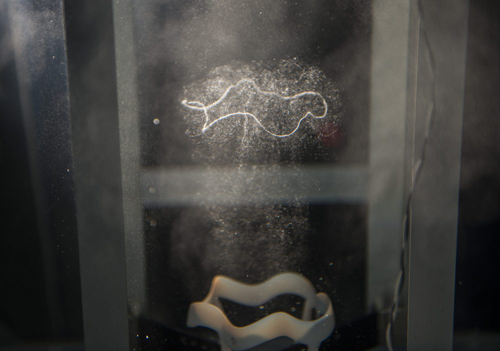 A vortex loop begins to form a knot during a demonstration in the physics laboratory of Asst. Prof. William Irvine. These long-elusive loops, if confirmed, could deepen scientists’ understanding between many disparate physical fields. Photo by Robert Kozloff

Kleckner and William Irvine, assistant professor in physics, report their findings on the creation and dynamics of vortex rings in Nature Physics, published online Sunday, March 3. Their work relates to deep questions in a variety of physics subfields, including turbulence, plasma physics, ordinary fluids and the more exotic superfluids. Knotted structures are thought to occur in all these phenomena but are difficult or impossible to observe.

“We look at plasma physics and turbulence every day in the sun,” Irvine said, yet such phenomena pose longstanding, unsolved scientific puzzles. But knots may offer a means of untangling the complicated behavior of the electrically charged gas in plasma flows, for example, and for understanding the energy transport of complex flows in regular fluids and superfluids.

Conservation of quantities like energy and momentum are among the most important principles in physics. In many systems, the degree of “knottedness” can be represented as a precise physical quantity that also is conjectured to be conserved. “If confirmed, this would deepen our understanding of the dynamics and connections between many disparate physical fields,” Irvine said. “We don’t know if it’s true or not, but I think we can finally test this in experiment. There’s actually around 50 years of theory on this subject with no clean experiments.” 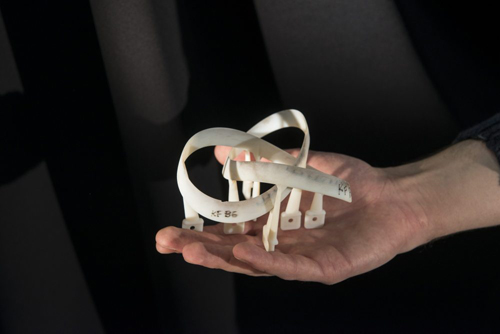 When accelerated to more than 100 g in a specially prepared water tank, hydrofoils like these can generate knotted vortex loops. Physicists have unsuccessfully attempted to create knotted vortices in the laboratory for more than a century. Photo by Robert Kozloff

Irvine became interested in knot physics as a postdoctoral scientist at New York University after watching a smoke-ring demonstration in Washington Square Park. He wondered if he could get colliding smoke rings to become tangled. After unsuccessfully trying to make them himself he learned that others had tried before and failed.

“At some point the enthusiasm wanes and you worry about whether there’s a very good reason why nobody has ever done this,” Irvine said. “But sometimes going into a new field with a little naivete can be helpful.”

Seeing a video of dolphins blowing air-core vortex rings convinced Irvine of the feasibility of the feat. He tried again, with Kleckner’s assistance, soon upon arrival at Chicago. “Before we built the lab we had this little prep room, and we started with a little water tank,” Irvine said. They tried to generate rings that would collide and then connect with each other, but the effort “failed catastrophically,” Irvine said.

The duo overcame their experimental difficulties by designing and fabricating various hydrofoils (wings used in water) on a 3-D printer. They tried approximately 30 different shapes before they successfully created the desired vortices. When accelerated in a water tank at more than 100 g, hydrofoils leave behind bubble-traced vortex loops, whose dynamics the researchers recorded with a high-speed camera.

“The bubbles are a great trick because they allow you to see the core of the vortex very clearly,” Irvine said.

The collaborative intellectual spirit and shared resources of the James Franck Institute also proved critical. “We wouldn’t have succeeded without this sort of atmosphere,” he said. 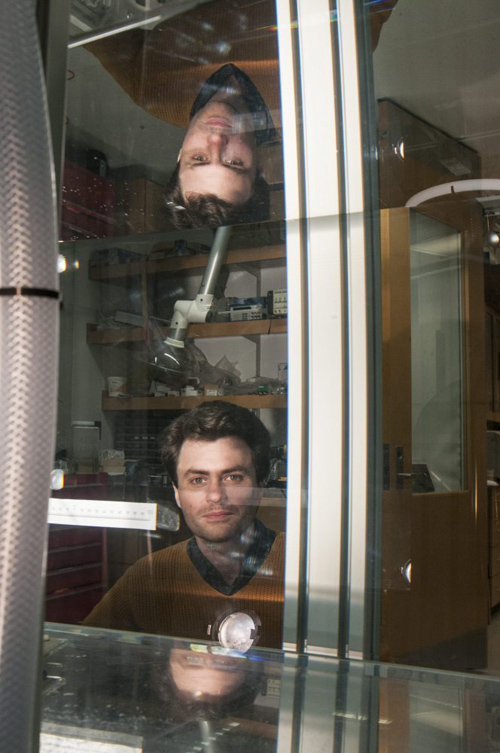 William Irvine, assistant professor in physics, peers through the experimental water tank in his laboratory at the Gordon Center for Integrative Science. Photo by Robert Kozloff

The roots of Irvine’s work date back to the days of Lord Kelvin, more than a century ago. Kelvin had seen a demonstration of a vortex ring by physicist Peter Tait, and was fascinated by their elegance and stability.

“This was at the time when nobody knew what atoms were and the aether was still in fashion,” Irvine said. In Kelvin’s day, physicists theorized that the universe was filled with a substance known as aether, which transmitted light waves across the vacuum of space much like air transmits sound through the atmosphere. Kelvin thus proposed that atoms were vortex rings and knots in the aether, where the different types of knots formed the building blocks for the periodic table of elements. 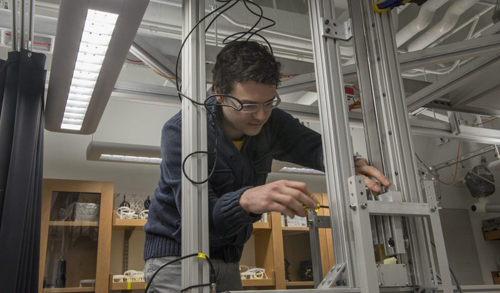 The idea that atoms were simply knots tied in the aether eventually failed. But it failed in such an interesting way, Irvine said, that it gave birth to the fruitful study of knotted systems in mathematics and physics.

In future research, Irvine and Kleckner hope to perform some of their experiments at larger scale to investigate whether size would lend greater stability to vortex rings. They also are investigating the fine-scale features of the vortices and whether “knottedness” is, or can be, conserved in fine-scale twisting of the vortex loops. “This is not something we presently know,” Kleckner said.