AUSTIN, Texas — A team of American and Chinese researchers has revealed the detailed feather pattern and color of Microraptor, a pigeon-sized, four-winged dinosaur that lived about 120 million years ago. A new specimen shows the dinosaur had a glossy iridescent sheen and that its tail was narrow and adorned with a pair of streamer feathers, suggesting the importance of display in the early evolution of feathers, as presented in the March 9 edition of the journal Science.

By comparing the patterns of pigment-containing organelles from a Microraptor fossil with those in modern birds, the scientists determined the dinosaur’s plumage was iridescent with a glossy sheen like the feathers of a crow. The new fossil is the earliest record of iridescent color in feathers. 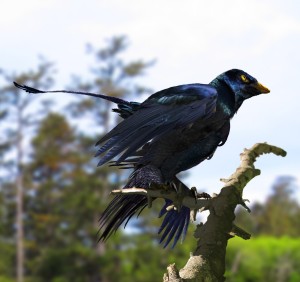 A new reconstruction of the dinosaur will help scientists approach the controversy of how dinosaurs began the transition to flight.

Since it was discovered as the first four-winged dinosaur in 2003, Microraptor has been at the center of questions about the evolution of feathers and flight. A number of scientists have proposed aerodynamic functions for various feathery features such as its tail, forewing shape and hind limbs, going so far as to place Microraptor models in wind tunnels and launch them from catapults. Once thought to be a broad, teardrop-shaped surface or with a shape more like that of a paper airplane meant to help generate lift, Microraptor’s tail fan is actually much narrower with two elongate feathers off of its tip. The researchers believe the tail feathering may have been ornamental and probably evolved for courtship and other social interactions and not as an adaptation for flight.

“Most aspects of early dinosaur feathering continue to be interpreted as fundamentally aerodynamic, optimized for some aspect of aerial locomotion,” said Julia Clarke, one of the paper’s co-authors and an associate professor of paleontology at The University of Texas at Austin’s Jackson School of Geosciences. “Some of these structures were clearly ancestral characteristics that arose for other functions and stuck around, while others may be linked to display behaviors or signaling of mate quality. Feather features were surely shaped by early locomotor styles. But, as any birder will tell you, feather colors and shapes may also be tied with complex behavioral repertoires and, if anything, may be costly in terms of aerodynamics.” 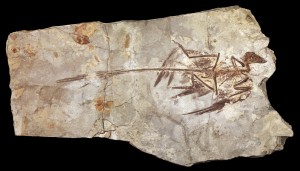 Microraptor fossil. Image credit: The University of Texas at Austin

“Modern birds use their feathers for many different things, ranging from flight to thermoregulation to mate-attracting displays,” said Matt Shawkey, a co-author and associate professor of biology at the University of Akron. “Iridescence is widespread in modern birds and is frequently used in displays. Our evidence that Microraptor was largely iridescent thus suggests that feathers were important for display even relatively early in their evolution.”

The scientists deduced Microraptor was iridescent when Shawkey discovered that in the most common iridescent feathers, arrays of pigment-bearing organelles called melanosomes were uniquely narrow.

Information on feather color of a variety of dinosaurs has recently come to light, since the first color map of an extinct dinosaur showed black and white spangles, red coloration and gray body color in a species called Anchiornis in 2010. Based on the new data from Microraptor and these other finds, a complex color repertoire that includes iridescence is probably ancestral to a group of dinosaurs called Paraves that originated at least 140 million years ago and includes dinosaurs such as Velociraptor as well as Archaeopteryx, Anchiornis and living birds.

“This study gives us an unprecedented glimpse at what this animal looked like when it was alive,” said Mark Norell, co-author and chair of the American Museum of Natural History’s Division of Paleontology. Clarke, Norell and the AMNH team, also including Mick Ellison and Rui Pei, worked closely re-analyzing the bony anatomy and digital overlays of the feathering in the new specimen and eight previously described Microraptor specimens to come up with their new view of the animal.

The researchers studied feathering, melanosome shape and density from a Microraptor fossil working closely with collaborators Quanguo Li, Ke-Qin Gao and Meng Qingjin at the Beijing Museum of Natural History. The samples and preservation of melanosomes were assessed by Jakob Vinther and compared with a database of melanosomes from a variety of modern birds assembled by Shawkey and Liliana D’Alba at the University of Akron.

The feather color displayed by many modern birds is produced partially by arrays of melanosomes, about a hundred of which can fit across a human hair. Generally found in a round or cigar-like shape, a melanosome’s structure is constant for a given color. After a breakthrough by Vinther in 2009, paleontologists have started analyzing the shape of melanosomes in well-preserved fossilized feather imprints. By comparing these patterns with those in living birds, scientists can infer the color of dinosaurs that lived many millions of years ago. Iridescence arises when the narrow melanosomes are organized in stacked layers.