Faced With Job Loss? Perception is Everything

ANN ARBOR, Mich.— When faced with job loss, people who consider themselves poor may limit employment prospects by believing they have a smaller social network than they actually do, says a University of Michigan business professor. 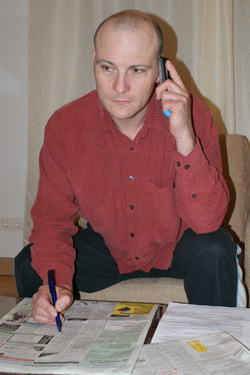 Faced With Job Loss? Perception is Everything

In a new study published in the journal Organization Science, Smith and colleagues Tanya Menon and Leigh Thompson of Northwestern University’s Kellogg School of Management found that that people who identify themselves with a lower socioeconomic status imagine having a smaller, less diverse social network.

Those who perceive themselves at a higher socioeconomic level act the opposite way, the researchers say. When seeking a new job, they call to mind, or “cognitively activate,” a larger, more diverse social network.

“People who perceive themselves to have low status may be further disadvantaging themselves following the threat of job loss,” Smith said. “That has real implications during a financial crisis when instances of job loss increase. If they’re also mentally cutting off the network ties that might be the most valuable to them, it adds fuel to the fire and creates a frustrating cycle. They feel threatened, reach deeper inside their network, limit their access to information on new opportunities, and feel further threatened.”

Smith and his co-authors examined data from the General Social Survey, a national sample of nearly 1,400 American adults, to gather information on participants’ family backgrounds, attitudes, and past and present social and professional statuses.

But the survey data couldn’t rule out reverse causality. It also couldn’t determine people’s beliefs about their networks or whether people in the high-status group had a different emotional reaction to a job threat.

The next step was a lab experiment to test the relationships between threat, status, and network perception. Participants reported their family’s socioeconomic status and were randomly assigned to one of two conditions—job security and job loss threat.

Questions were posed about the degree to which they felt threatened, perceptions of the threat, and the perception of their social network. The lab experiment ruled out reverse causality and showed people in the high- and low-level groups had similar emotional reactions to the job threat.

Taken together, the survey and lab experiment show that anxiety from a job threat creates unique social network responses related to socioeconomic position, Smith and colleagues say. It illustrates the role cognitive function plays in how people activate their social network when it comes to a job search.

“The question now is why people behave in such different ways,” Smith said. “That’s an area for further research, but we can raise some possibilities. People with the low-status perception tend to internalize when threatened and perceive themselves as having a lower-status network. People in the high-status group tend to block or divert threats, and extend that reaction to network contexts. They recall their social network as large and diverse as a way to minimize the impact of the external threat.”

Smith says his research is something companies, especially human resources professionals, should keep in mind when dealing with layoffs.

“Job loss is a reality of organizational life,” he said. “When a company is laying off folks, something as simple as reminding people that they have a network full of resources, or encouraging them to cast a wide net could help counterbalance this effect. The job counselors might steer them toward LinkedIn and Facebook to mobilize their old connections and make sure they access all the information out there.”