ANN ARBOR, Mich. — The ongoing spread of non-native mussels in the Great Lakes has caused “massive, ecosystem-wide changes” throughout lakes Michigan and Huron, two of the planet’s largest freshwater lakes, according to a new University of Michigan-led study.

The blitzkrieg advance of two closely related species of mussels—the zebra and quagga—is stripping the lakes of their life-supporting algae, resulting in a remarkable ecological transformation and threatening the multibillion-dollar U.S. commercial and recreational Great Lakes fisheries.

Previous studies have linked the mussels to far-reaching changes in Lake Michigan’s southern basin. Now a paper by two University of Michigan ecologists and a colleague shows that the same dramatic changes are occurring in northern Lake Michigan and throughout Lake Huron, as well.

“These are astounding changes, a tremendous shifting of the very base of the food web in those lakes into a state that has not been seen in the recorded history of the lakes,” said Mary Anne Evans, lead author of a paper scheduled for publication in the April 15 edition of the journal Environmental Science & Technology. “We’re talking about massive, ecosystem-wide changes.” 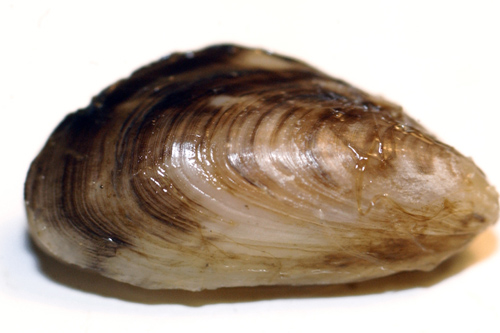 Evans is a research fellow at the U-M School of Natural Resources and Environment. The other authors are Donald Scavia, director of U-M’s Graham Environmental Sustainability Institute, and Gary Fahnenstiel, senior ecologist at the National Oceanic and Atmospheric Administration’s Great Lakes Environmental Research Laboratory.

Because the changes are so profound and are happening so rapidly, the authors recommend that Great Lakes management agencies review and perhaps revise their policies so they can respond more quickly.

“New strategies for managing the lakes are urgently needed. Ecological changes that formerly occurred over decades are now happening in just a few years, so we need to adapt our management policies to this new reality,” Scavia said. 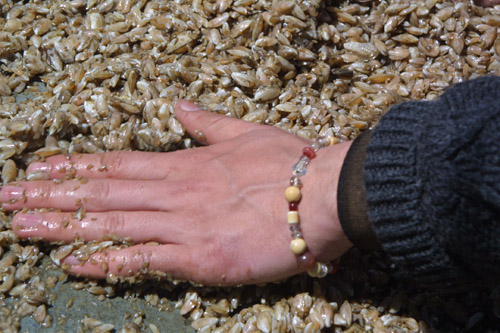 This recommendation is especially relevant in the context of the current review of the Great Lakes Water Quality Agreement by the International Joint Commission, Scavia said. Through the IJC, the United States and Canada jointly manage the Great Lakes.

Though the zebra mussel is better known to the public, over the past decade it has largely been overshadowed by the quagga mussel, which can thrive far from shore in deep, mud-bottomed waters. Each of the fingernail-size quagga mussels filter about a quart of water a day, and billions of them now blanket the bottoms of lakes Michigan and Huron down to depths of nearly 400 feet.

They feed on algae, including single-celled plants called diatoms that are encased in glass-like shells made of silica, which the diatoms extract from lake water. Until recently, the diatoms “bloomed” each spring in the Great Lakes, and the level of silica in upper lake waters dropped as diatoms built their protective shells, then sank to the lake bottom, taking the silica with them.

The drop in silica levels due to the spring diatom bloom, known as the seasonal drawdown, has long been used as an indicator of overall algal production in the Great Lakes. 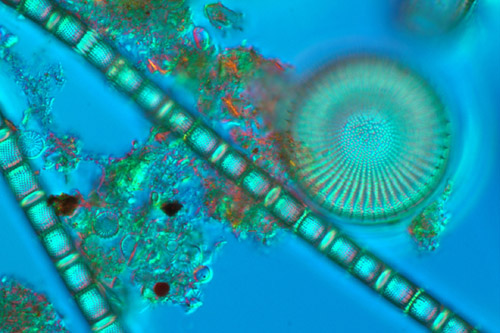 Reviewing records of silica levels in lakes Michigan and Huron collected over the past 30 years by the Environmental Protection Agency, Evans and her colleagues found that algal production throughout the two lakes was about 80 percent lower in 2008 than it had been in the 1980s.

In Lake Michigan, the decrease in the seasonal drawdown coincided with an explosion in the quagga mussel population and its expansion to greater depths, which began in 2004. The same changes occurred a few years earlier in Lake Huron, where quagga mussels greatly increased in abundance between 2000 and 2003.

“For years, all the talk was about the zebra mussels. And then its close cousin comes in, the little quagga mussel, and wreaks even more havoc on these huge offshore systems,” said NOAA’s Fahnenstiel.

“These changes are unprecedented,” he said. “In terms of algal abundance and water clarity, lakes Michigan and Huron are now similar to Lake Superior.” 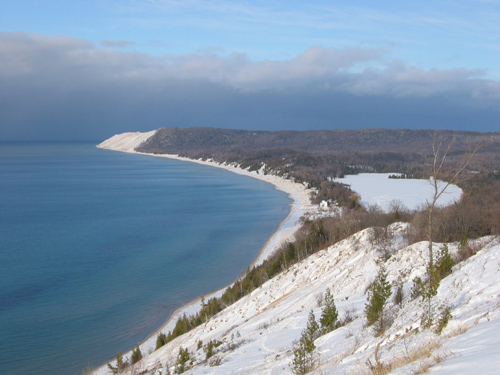 By filtering out the algae, the mussels are robbing other organisms of the food they need to survive. Of particular concern is the plight of Diporeia, a tiny shrimplike creature that was one of the pillars supporting the base of the Great Lakes food web.

Nearly every fish species in the Great Lakes relies on Diporeia at some point in its life cycle. But Diporiea populations have crashed in lakes Michigan and Huron, and the change is already impacting Great Lakes commercial fisheries and the sport-fishing enterprise.

“The big question now is how large the quagga mussel population will get,” Evans said. “And when it gets as big as it can get, will it stay at that level or will it die back because it has decimated its own food supply? We don’t really know what to expect at this point.”

The work was funded in part by a grant from NOAA’s Center for Sponsored Coastal Ocean Research and the U-M’s Graham Environmental Sustainability Institute.