Ecologists are wary of non-native species, but along the shores of Cape Cod where grass-eating crabs have been running amok and destroying the marsh, an invasion of a predatory green crabs has helped turn back the tide in favor of the grass. The counter-intuitive conclusions appear in a new paper in the journal Ecology.

PROVIDENCE, R.I. [Brown University] — Long vilified, invasive species can sometimes become an ecosystem asset. New Brown University research published online in the journal Ecology reports exactly such a situation in the distressed salt marshes of Cape Cod. There, the invasive green crab Carcinus maenas is helping to restore the marsh by driving away the Sesarma reticulatum crabs that have been depleting the marsh grasses.

The observations and experiments of the research show that the green crab has filled the void left by the decline of native predators of sesarma crabs, the authors said. In previous research they showed that predator decline has come about because of recreational fishing.

“Humans have had far-reaching impacts on ecosystems,” said author Tyler Coverdale, a researcher in the lab of lead author Mark Bertness, chair of the Department of Ecology and Evolutionary Biology. “Some of those impacts, like overfishing, cause species to decline in their native ranges. Others, like shipping and trade, cause species to become more common outside of their native ranges. Most of the time these opposing types of impacts have negative results. In this case, an invasive species is potentially restoring a lost ecological function.” 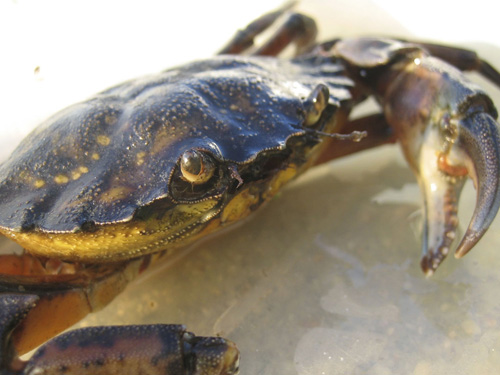 Bertness and his group have been working on the marshes for years to trace the extent and cause of the damage, which includes grass die-offs and subsequent erosion. A few years ago, they started noticing that where there was still soil, grasses were sometimes growing back somewhat, although far short of full recovery.

The next steps were experiments to test whether all this was a mere coincidence of coexistence or whether there was a dynamic between the green crabs and the sesarma crabs that would plausibly defend the grass.

At select sites, Bertness and Coverdale enclosed the two crabs together within a wire cage at a burrow. After a set period of time they came back to observe the results and always found the same story. Green crabs won the struggle for the burrows. In fact sesarma crabs survived the tussle only 15 percent of the time. As a control they caged in other sesarma crabs without green crabs, and those sesarma crabs always survived.

Finally they tested whether green crabs had to eat the sesarma crabs to protect the grass or whether their mere presence had a deterrent effect. They did this by fencing in some sesarma crabs by themselves, some with a free roaming green crab (a clear and present danger) and some with a caged green crab (physically harmless but still plainly evident).

Sesarma left alone ate lots of grass in their fenced in area. Sesarma who faced a free-roaming or a caged green crab both ate far less grass. In other words, the presence of a green crab was as effective a deterrent to sesarma herbivory as actual attacks by green crabs.

Bertness likened the green crabs to scarecrows, which model what ecologists have recently begun to account for as “non-consumptive effects.” Lay people already call that effect “scaring things away.”

In two ways, therefore, the new study provides evidence for two newer views in ecology, Bertness said. One is that invasive species can sometimes turn out to be helpful. The other is that ecologists should account for the power of a predator’s threat, not just its actual attacks.

As for the marshes, however, Bertness said they need more help than the green crab alone can deliver.

“The marshes are slowly coming back but they were destroyed much faster than they are going to be able to rebuild,” he said.