COLUMBIA, Mo. ­— Crocodilians have nerves on their faces that are so sensitive, they can detect a change in a pond when a single drop hits the water surface several feet away. Alligators and crocodiles use these “invisible whiskers” to detect prey when hunting. Now, a new study from the University of Missouri has measured the nerves responsible for this function, which will help biologists understand how today’s animals, as well as dinosaurs and crocodiles that lived millions of years ago, interact with the environment around them.

“The trigeminal nerve is the nerve responsible for detection of sensations of the face,” said Casey Holliday, assistant professor of anatomy in the MU School of Medicine. “While we’ve known about these sensitive nerves in crocodiles, we’ve never measured the size of the nerve bundle, or ganglion, in their skulls, until now. When compared to humans, this trigeminal nerve in crocodiles is huge.”

Nerves inside the skull. Crocodilian facial nerves are much more sensitive than humans. This allows the crocodile to detect minute disruptions in water as they hunt for prey or search for a mate. Image credit: University of Missouri

The key to this measurement is a specific hole in the skull. The trigeminal nerve is rooted inside the skull, but must travel through a large hole before it branches out to reach the crocodile’s skin on its face. By examining how the skull size, brain size and ganglion size relate to each other, scientists can estimate how sensitive the face is. Eventually, Holliday hopes to measure this nerve in other ancient and contemporary species to learn more about animal behavior.

“Currently, we rely on alligators, crocodiles and birds to provide us with information about how ancient reptiles, such as pre-historic crocodiles and dinosaurs, functioned,” said Holliday, who co-authored the study with doctoral student Ian George. “However, the first thing we have to do is to understand how the living animals function.” 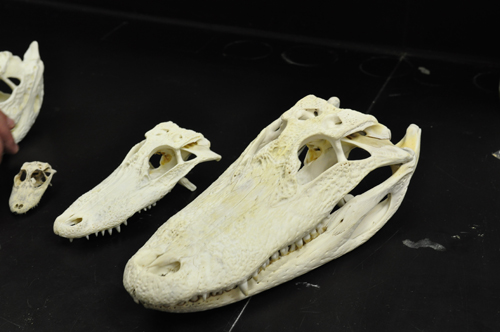 When comparing the size of the hole for the trigeminal nerve found in alligators to that of certain dinosaurs, George says that the hole in the much-larger dinosaur skull is very similar in size or even smaller, which could give scientists more information about how well dinosaurs could detect small sensations on the face. From there, the scientists can start to trace the evolution of this nerve and the mechanism used by crocodiles.

“Some species of ancient crocodiles lived on land and they probably wouldn’t have a use for a sensitive face that can detect disturbances in the water,” George said. “So our next step is to trace back and determine when the nerve got bigger and see how that might have paralleled the animals’ ecology.” 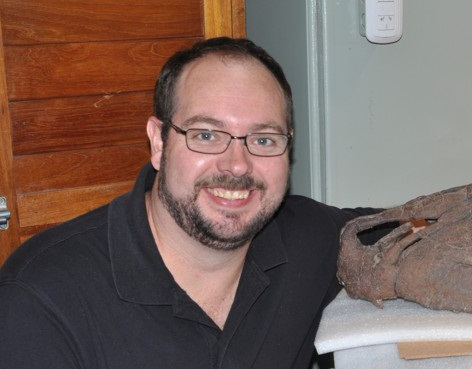 Casey Holliday, assistant professor of anatomy in the MU School of Medicine. Holliday has completed a new study that will help biologists understand how today’s animals, as well as dinosaurs and crocodiles that lived millions of years ago, interact with the environment around them. Image credit: University of Missouri

Holliday says that this information will aid future research, including when his team will examine skulls of ancient crocodiles. Understanding this nerve and its functions could also lead to better understanding of the anatomical basis for behavior in many living animals, including fish, electric eels, platypi and humans.

“The same way that we would look at the size of the visual cortex in the brain to understand how well an animal might see, we can now look at the trigeminal nerve in animals to determine how sensitive their skin on their faces is,” Holliday said.

The study is being published in The Anatomical Record this month.