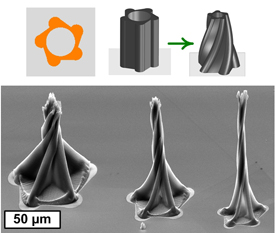 Twisting spires are one of the 3D shapes researchers at the University of Michigan were able to develop using a new manufacturing process. Image credit: A. John Hart

.— Twisting spires, concentric rings, and gracefully bending petals are a few of the new three-dimensional shapes that University of Michigan engineers can make from carbon nanotubes using a new manufacturing process.

The process is called “capillary forming,” and it takes advantage of capillary action, the phenomenon at work when liquids seem to defy gravity and spontaneously travel up a drinking straw.

The new miniature shapes have the potential to harness the exceptional mechanical, thermal, electrical, and chemical properties of carbon nanotubes in a scalable fashion, said A. John Hart, an assistant professor in the Department of Mechanical Engineering and in the School of Art & Design.

The 3D nanotube structures could enable countless new materials and microdevices, including probes that can interface with individual cells, novel microfluidic devices, and lightweight materials for aircraft and spacecraft.

A paper on the research is published in the October edition of Advanced Materials, and is featured on the cover.

“It’s easy to make carbon nanotubes straight and vertical like buildings,” Hart said. “It hasn’t been possible to make them into more complex shapes. Assembling nanostructures into three-dimensional shapes is one of the major goals of nanotechnology and nanomanufacturing. The method of capillary forming could be applied to many types of nanotubes and nanowires, and its scalability is very attractive for manufacturing.”

Hart’s method starts by patterning a thin metal film on a silicon wafer. This film is the iron catalyst that facilitates the growth of vertical carbon nanotube “forests” in patterned shapes. It’s a sort of template. Rather than pattern the catalyst into uniform shapes such as circles and squares, Hart’s team patterns a variety of unique shapes such as hollow circles, half circles, and circles with smaller ones cut from their centers. The shapes are arranged in different orientations and groupings, creating different templates for later forming the 3D structures using capillary action.

Then he suspends the silicon wafer with its nanotubes over a beaker of a boiling acetone. He lets the acetone condense on the nanotubes, and then evaporate. 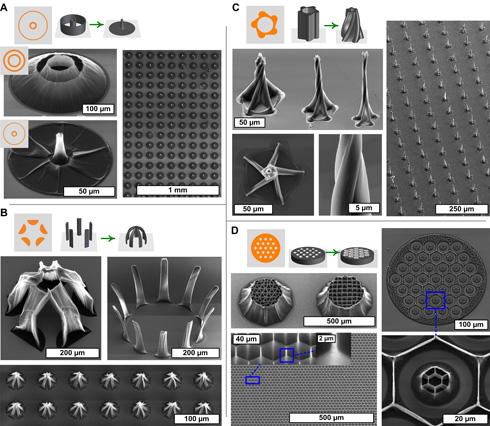 About the image: By using unique two-dimensional templates, researchers at the University of Michigan could coax carbon nanotubes to grow in intricate, curving three-dimensional structures. Image credit: A. John Hart

“We program the formation of 3D shapes with these 2D patterns,” Hart said. “We’ve discovered that the starting shape influences how the capillary forces manipulate the nanotubes in a very specific way. Some bend, others twist, and we can combine them any way we want.”

The capillary forming process allows the researchers to create large batches of 3D microstructures—all much smaller than a cubic millimeter, Hart said. In addition, the researchers show that their 3D structures are up to 10 times stiffer than typical polymers used in microfabrication. Thus, they can be used as molds for manufacturing of the same 3D shapes in other materials.

“We think this opens up the possibility to create custom nanostructured surfaces and materials with locally varying geometries and properties, ” Hart said. “Before, we thought of materials as having the same properties everywhere, but with this new technique we can dream of designing the structure and properties of a material together.”

The paper is called “Diverse 3D Microarchitectures Made by Capillary Forming of Carbon Nanotubes,” The lead authors are postdoctoral researcher Michael De Volder, and Sameh Tawfick, a doctoral candidate in Mechanical Engineering.

This research is funded by the University of Michigan College of Engineering and the U-M Department of Mechanical Engineering, the Belgium Fund for Scientific Research, and the National Science Foundation.

The university is pursuing patent protection for the intellectual property, and is seeking commercialization partners to help bring the technology to market.