*Candida tropicalis turns out to have sex, making it the second medically important member of the genus to be capable of mating. Sex may improve the survival of the species, particularly when it’s under pressure. It may also mean the species can achieve greater virulence or drug resistance more quickly than previously thought.*

PROVIDENCE, R.I. [Brown University] — The fungi of the Candida genus, known to millions of patients worldwide for their ability to cause serious infections, were once all thought to be asexual. Even after scientists discovered that the mating habits of Candida albicans were many and varied, they remained convinced that many of the more infectious ones did not mate. Now with the first report that Candida tropicalis can mate sexually as well, the chastity of the whole genus comes into further doubt.

“I think the really asexual fungi are going to turn out to be the exception, rather than the rule,” said Richard Bennett, assistant professor of biology at Brown University and senior author of the report published in Proceedings of the National Academy of Sciences.

When microbes meet Two Candida tropicalis cells, one stained red and the other green, come closer, put out mating projections, and soon produce a daughter cell. Candida is not, as was once thought, exclusively asexual. Image credit: Bennett Lab/Brown University

The revelation that C. tropicalis mates sexually is not simply prurient. Some scientists, including Bennett, hypothesize that the pathogen’s mix of sexual behaviors may have evolved as a survival tactic. When things are going well, it may be best to reproduce asexually to keep a successful genome fairly stable. If conditions become hostile, then it makes sense to switch to sexual reproduction to accelerate the creation and proliferation of new, adaptive traits.

“Sex is really good for microbes when times are hard,” Bennett said. “That’s the time when you need to adapt and try various combinations of your genes or alleles.” 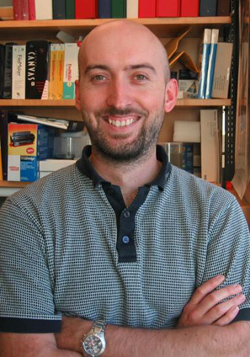 The at least occasionally sexual nature of C. tropicalis may mean that the species can evolve faster than scientists thought it did, Bennett said. That means it may also be more capable of developing increased virulence or drug resistance.

What the student saw

The research began somewhat unintentionally in the spring of 2010 when Allison M. Porman, a new graduate student, was on a brief rotation through Bennett’s lab. Porman happened to notice that a Petri dish of C. tropicalis had separated out into darker and lighter regions. This suggested that the fungi had formed two separate phenotypes, with an intriguing similarity to the “white” and “opaque” phenotypes of C. albicans. In C. albicans, that distinction is not just one of color, but also of mating behavior.

Porman rejoined the lab and led the experiments described in the new paper. What she, Bennett, and their co-authors discovered was not only that C. tropicalis mates and that the mating depends on pheromones, but also that the genetic “switch” that converts the fungus from its chaste “white” state to its more libidinous “opaque” state shares a key gene in common with that in C. albicans called WOR1. And yet, they determined the sequence of necessary regulatory events involving WOR1 doesn’t proceed in exactly the same way in C. tropicalis as in C. albicans. In C. albicans one trigger among several appears to be temperature. The team is still trying to figure out what turns C. tropicalis on.

“It’s been really hard to find the trigger,” Bennett said. “We can’t force the switch in either direction. We have to just plate loads of cells and hope we get the one random event that switches to the other state.”

Finding the right environmental trigger could either support or undermine the hypothesis that fungus employs sex as a survival tactic. It could also offer clues to finding the presumed mating behavior of other Candida species.

In addition to Porman and Bennett, other authors include Kevin Alby and Matthew Hirakawa. The National Institutes of Health supported the research.