COLUMBIA, Mo. – When a muscle is damaged, dormant adult stem cells called satellite cells are signaled to “wake up” and contribute to repairing the muscle. University of Missouri researchers recently found how even distant satellite cells could help with the repair, and are now learning how the stem cells travel within the tissue. This knowledge could ultimately help doctors more effectively treat muscle disorders such as muscular dystrophy, in which the muscle is easily damaged and the patient’s satellite cells have lost the ability to repair.

“When your muscles are injured, they send out a ‘mayday’ for satellite cells to come and fix them, and those cells know where to go to make more muscle cells, and eventually new muscle tissue,” said D Cornelison, an associate professor of biological sciences in the College of Arts and Science and a researcher in the Bond Life Sciences Center. “There is currently no effective satellite cell-based therapy for muscular dystrophy in humans. One problem with current treatments is that it requires 100 stem cell injections per square centimeter, and up to 4,000 injections in a single muscle for the patient, because the stem cells don’t seem to be able to spread out very far. If we can learn how normal, healthy satellite cells are able to travel around in the muscles, clinical researchers might use that information to change how injected cells act and improve the efficiency of the treatment.” 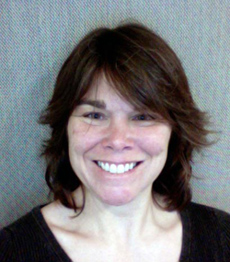 D Cornelison, an associate professor of biological sciences in the College of Arts and Science and a researcher in the Bond Life Sciences Center, says knowing how adult stem cells travel could help treatments for muscle disorders such as muscular dystrophy. Image credit: University of Missouri

In a new study, researchers in Cornelison’s lab used time-lapse microscopy to follow the movement of the satellite cells over narrow “stripes” of different proteins painted onto the glass slide. The researchers found that several versions of a protein called ephrin had the same effect on satellite cells: the cells that touch stripes made of ephrin immediately turn around and travel in a new direction.

“The stem cell movement is similar to the way a person would act if asked to walk blindfolded down a hallway. They would feel for the walls,” Cornelison said. “Because the long, parallel muscle fibers carry these ephrin proteins on their surface, ephrin might be helping satellite cells move in a straighter line towards a distant ‘mayday’ signal.”

If researchers gave the satellite cells the signals to differentiate and form muscle fibers in culture, the group also found that they could use stripes of ephrins to get them to arrange themselves in parallel, the way muscle fibers always do in living beings, but have never been persuaded to do in a culture dish. This leads researchers to think that ephrins might actually be regulating several of the different steps that are needed to get from a population of stem cells spread out all over the muscle, to an organized and patterned new muscle fiber.

“We are really excited about the potential of these findings to explain a lot of things that were puzzling about the way satellite cells behave in healthy muscle, compared to a muscular dystrophy patient’s own cells, or cells that have been injected therapeutically,” Cornelison said. “If we’re really lucky, we could find something that could make a difference in these kids’ lives, and that’s what we want the most.”

The paper, titled “Eph/ephrin interactions modulate muscle satellite cell motility and patterning,” was published in the December edition of the journal Development. Co-authors include Danny Stark, Rowan Karvas and Ashley Siegel, all students from the University of Missouri Division of Biological Sciences. The National Institutes for Health funded the study.