Indonesian waters are major agents for global levels of atmospheric water vapor. A prolonged dry spell in Indonesia thousands of years ago has been found to correlate with ice ages in the northern hemisphere. Brown researchers have compiled a detailed Indonesian climate record of the last 60,000 years, tracking telltale indicators in sedimentary cores: titanium levels (a marker for surface water runoff) and the carbon isotopes of leaf wax, a marker for plant varieties (grasses indicate dry conditions).

PROVIDENCE, R.I. [Brown University] — Using sediments from a remote lake, researchers from Brown University have assembled a 60,000-year record of rainfall in central Indonesia. The analysis reveals important new details about the climate history of a region that wields a substantial influence on the global climate as a whole.

The Indonesian archipelago sits in the Indo-Pacific Warm Pool, an expanse of ocean that supplies a sizable fraction of the water vapor in Earth’s atmosphere and plays a role in propagating El Niño cycles. Despite the region’s importance in the global climate system, not much is known about its own climate history, says James Russell, associate professor of geological sciences at Brown.

“We wanted to assess long-term climate variation in the region,” Russell said, “not just to assess how global climate influences Indonesia, but to see how that feeds back into the global climate system.” 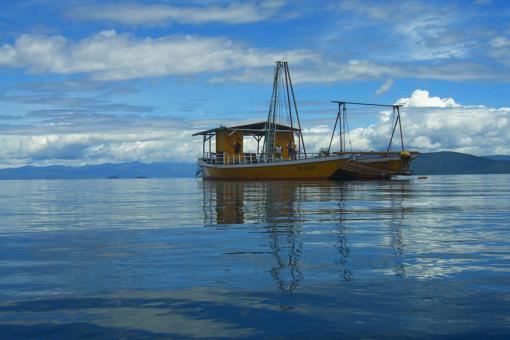 Beautiful at the core. Lake Towuti, an ancient lake on the island of Sulawesi in central Indonesia, has yielded a 60,000-year sedimentary record of Indonesian climate. Weather conditions in Indonesia have a significant impact on global climate. Image credit: Russell lab/Brown University

The data are published in the Proceedings of the National Academy of Sciences.

The study found that the region’s normally wet, tropical climate was interrupted by a severe dry period from around 33,000 years ago until about 16,000 years ago. That period coincides with peak of the last ice age, when glaciers covered vast swaths of the northern hemisphere. Climate models had suggested that glacial ice could shift the track of tropical monsoons, causing an Indonesian dry period. But this is the first hard data to show that was indeed the case.

It’s also likely, Russell and his colleagues say, that the drying in Indonesia created a feedback loop that amplified ice age cooling. 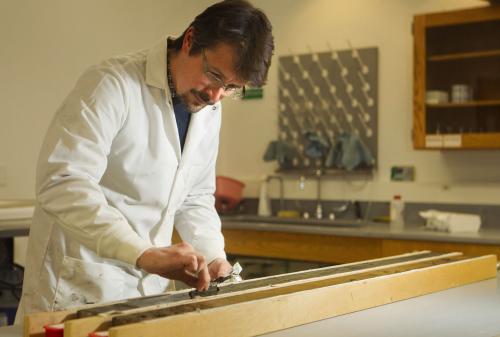 Surprisingly absent from the data, Russell says, is the influence of other processes known to drive climate elsewhere in the tropics. In particular, there was no sign of climate change in Indonesia associated with Earth’s orbital precession, a wobble caused by Earth’s axis tilt that generates differences in sunlight in a 21,000-year cycle.

“There’s very little indication of the 21,000-year cycle that dominates much of the tropics,” he said. “Instead we see this very big set of changes that appear linked to the amount of ice on earth.”

To arrive at those conclusions, the researchers used sediment cores from Lake Towuti, an ancient lake on the island of Sulawesi in central Indonesia. By looking at how concentrations of chemical elements in the sediment change with depth, the researchers can develop a continuous record of how much surface runoff poured into the lake. The rate of runoff is directly related to the rate of rainfall.

In this case, Russell and his colleagues looked at titanium, an element commonly used to gauge surface runoff. They found a marked dip in titanium levels in sediments dated to between 33,000 and 16,000 years ago — a strong indicator that surface runoff slowed during that period. 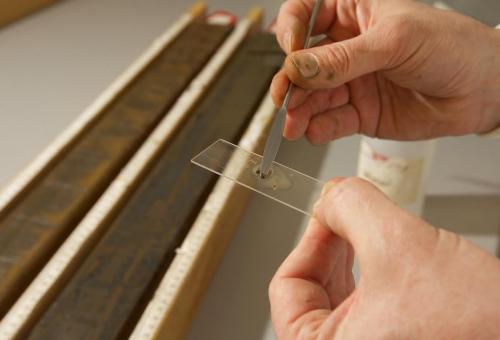 A chemical record of millennia. The chemistry of surface run-off, including the carbon isotopes in leaf wax from plants, builds an accurate record of local climate conditions in the lake-bed sediment. Image credit: Mike Cohea/Brown University

That finding was buttressed by another proxy of rainfall: carbon isotopes from plant leaf wax. Leaves are covered with a carbon-based wax that protects them from losing too much water to evaporation. Different plants have different carbon isotopes in their leaf wax. Tropical grasses, which are adapted for dryer climates, tend to have the C-13 isotope. Trees, which thrive in wetter environs, use the C-12 isotope. The ratio of those two isotopes in the sediment cores is an indicator of the relative abundance of grass versus trees.

The cores showed an increase in abundance of grass in the same sediments that showed a decrease in surface runoff. Taken together, the results suggest a dry period strong enough to alter the region’s vegetation that was closely correlated with the peak glaciation in the northern hemisphere.

The next step for Russell and his colleagues is to see if this pattern is repeated in multiple glacial cycles. Glacial periods run on cycles of about 100,000 years. Core samples from deeper in the Lake Towuti sediment will show whether this drying evident during the last ice age also happened in previous ice ages. It’s estimated that Lake Tuwuti sediments record up to 800,000 years of climate data, and Russell recently received funding to take deeper cores.

Ultimately, Russell hopes his work will help to predict how the region might be influenced by human-forced global warming.

“This provides the kind of fundamental data we need to understand how the climate of this region operates on long timescales,” he said. “That can then anchor our understanding of how it might respond to global warming.”