Evolutionary biologist Sir Peter Crane has been dean of the Yale School of Forestry & Environmental Studies (F&ES) since 2009. A former director of Chicago’s Field Museum and chief executive of England’s Royal Botanic Gardens, Kew, he recently spoke with Yale News about F&ES’ internationalism, the role of business in environmental management, and what it was like to be knighted at Buckingham Palace, among other topics. The following is an edited version of that conversation.

What do you most like telling people about F&ES?

The thing that really sparkles about this school is the student body. I’m reviewing applications for our incoming class right now. When you look at those applications, you realize these are incredibly talented people. They’ve often been out in the world doing something directly related to the environment. Some have been in the Peace Corps, some have been in the State Department, some on Wall Street, some working with the Nature Conservancy in this country or with the World Wildlife Fund around the world. They bring a lot to the table. What I tell students is that they’re going to have a fantastic experience here. They’re going to learn a lot from the faculty, but they’re also going to learn a lot from each other.

The environment has no boundaries. How does F&ES reflect that?

My predecessor [former dean J. Gustave Speth] really consolidated the view that forestry and environmental studies at Yale has to be an international school, and that is also consistent with Yale’s strong international emphasis. I’m an internationalist myself. I’m from the United Kingdom. I’ve worked in the States, and I’ve been fortunate to travel all over the world. So I understand the importance of an international perspective. There are two major impediments that often get in the way of dealing effectively with environmental issues. One is an inability to project into the future, to think beyond an election term and imagine about what the world is going to be like in 10 years’ time or 50 years, or 100 years. The other is a lack of breadth, an inability to see the whole picture. Having an international perspective helps provide that breadth. About a quarter to a third of our students in any given year are international, and they come from everywhere, though I’d like to see more students from Africa and from other parts of the world that so far are underrepresented. 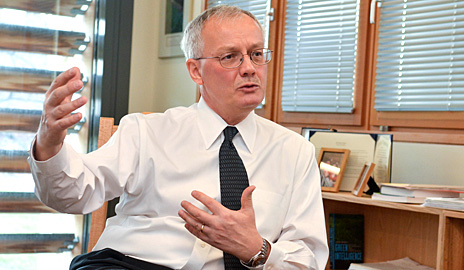 What are some of the changes you’ve been making at F&ES?

We’ve made many changes, but in particular we have taken a good look at the curriculum. We’ve tried to make it more efficient and more flexible. Our students have the privilege of enormous freedom, and with that privilege comes the responsibility of figuring out how they might navigate through the 130-odd courses that we offer in any given year. We’ve also begun to establish more interdisciplinary courses. We’re very interested in reaching the broader Yale community. There’s also huge interest in environmental issues among the undergraduate student body, and we need to respond to that. For the general undergraduate population, it would be great if they all took even just one really good environmental course. Then, when they go on to be president, they’ll at least have that in their background.

Where would you say F&ES is heading?

I don’t think there’s any doubt that we are one of the preeminent, if not the preeminent, environment school in the country. There are four things we need to focus on, and they’re pretty simple. We need to make sure that we recruit the best students, give them a really good experience while they’re here that gives them the skills they need, and then we need to make sure that we send them on their way with the best possible chance of securing a leadership position that will enable them to maximize their influence. In order to accomplish these things and to maintain our reputation, the fourth priority is to be sure the research done in this school is of the very highest quality, because from that research, I think, comes our reputation. And from that reputation will come the resources to support the growth of the school.

Could you elaborate further?

From the standpoint of our research reputation there are really three things we need to do: One is what I call secure the base — we’ve got a long history in ecology and forestry. I don’t think that our commitment to this area will ever waver. Our focus will always stay on terrestrial systems. We want to make sure we stay strong in that area and that we stay true to our 100-year history. At the same time, we need to look at a couple of other areas that will round out the current portfolio of expertise within the school.

For one — particularly with Dean Ted Snyder’s arrival at the School of Management (SOM) — and given the fact that we have a 30-year history of a joint degree with SOM – we need to do more on the business and environment front. Obviously there are many actors in the environmental arena, but a key group of actors is business. And businesses look at the environment in many ways beyond the natural resources they consume. They have to deal with it in terms of their license to operate, and they also see business opportunities in responding to environmental concerns. So business and the environment is an important area for us in the future.

And then, with respect to stewardship of the land, there has been much recent talk about the urbanizing global population, a population that’s moving from rural areas into the cities. We can’t hope to establish from the ground up a massive new cities program, but we do need to make sure that we have more expertise in that area, and related areas like industrial sustainability, than we currently do. Energy is another huge issue of great importance. We want to be sure that we’re providing our students with the kind of background and training in energy and the environment that they will need in their future careers.

What are some of the interesting interdisciplinary questions people are asking at F&ES these days?

I think that just about every environmental issue has a strong interdisciplinary component and all our faculty grapple with the interdisciplinary implications of their work at some level. That usually means looking beyond the numbers and dealing with the way people think and feel about complicated issues. For example, we had a seminar recently from a researcher looking at the complexities around the siting of energy facilities. Where do you decide to put a wind turbine? A liquid natural gas facility? A new nuclear plant? These kinds of questions relate not just to the ideal of planning solutions, but to sociology and how people interact with these facilities in and around the places where they live. And these kinds of social issues come to the fore prominently in urban systems, which are an especially important for us in the future.

Are there aspects of the environment that you believe are understudied, and if so, what might be done about it?

There are several challenges, and they’re interrelated, of course. A big struggle for our discipline is how you train our students to think in an interdisciplinary way. And this is particularly an issue in a university, which typically values depth over breadth. A second key area, as I mentioned before, is the need to think long-term. Short term always trumps the long term. And we’ve just seen this recently, for example — “We must get rid of the EPA because they’re job killers.” So I think that’s a very important area. Another area is global governance and how we will deal in a sensible, collective way with fragmented and weak systems of international governance.

Are there some interdisciplinary collaborations that F&ES is part of that you consider especially promising?

We play a pretty active role in the Yale Climate and Energy Institute (YCEI). And I think one of the things that’s been really effective about YCEI has been the way it has brought together faculty not just from F&ES, but also from chemistry, from geology and geophysics, from law, and so on. Making those connections across institutional boundaries within Yale is really, really important. As another example, we have a promising new initiative focused on the Himalayas, addressing the interconnections among environment, livelihoods and cultures. At it’s core this has a strong collaboration between F&ES and anthropology, but also includes folks in several other departments, for example religious studies, who have active interests in the Himalayas for one reason or another.

Let’s turn to your work for a moment. You’re an expert on plant life. Tell us more about your research.

One of the things about my career has been that I’ve worked on a range of different plant groups and been interested in lots of different plants. I’m finishing a little book on Ginkgo, a plant we all know that’s becoming an increasingly common sight in urban landscapes. It’s among the most common street trees in Manhattan, for example. But it is also a plant which almost went extinct, not because of human causes, but because of environmental changes at the end of the last glaciation. In a sense the Ginkgo is an antidote to the more common extinction narrative — it is a tree that has been rescued by people. So I treat its story as a biography that ends on a hopeful note.

In 2004 you were knighted for your services to horticulture and conservation. What was that like?

Recognition at that level is obviously a huge honor and a wonderful experience. The day itself involves a formal ceremony at Buckingham Palace, which is shared with many wonderful people who have contributed to society in many different ways, from working as a midwife in deprived areas of London to serving the British government overseas to playing soccer, or whatever. Everyone who gets one of the awards — whether it is a knighthood or some other honor — attends the ceremony and has a few private moments with either the queen or, in my case, Prince Charles. In the case of knighthood they still do the kneeling and the sword — which, with everyone looking on, and a slight touch of nerves, is a lot more complicated than it looks.