Depression is one of the most common mental disorders in the elderly, but little is known about the underlying biology of its development in older adults.

In a small study published in the November issue of the peer-reviewed journal Archives of General Psychiatry, UCLA researchers used a unique brain scan to assess the levels of amyloid plaques and tau tangles in older adults with a type of severe depression called major depressive disorder (MDD).

Previous research has suggested that plaque and tangle deposits in the brain — hallmarks of Alzheimer’s disease and many dementias — are associated not only with memory loss but also with mild symptoms of depression and anxiety in middle-aged and older individuals. The team wanted to see what the brain-scanning technique developed at UCLA would find in older people with MDD.

UCLA researchers have created a chemical marker called FDDNP that binds to both plaque and tangle deposits, which can then be viewed through a positron emission tomography (PET) brain scan, providing a “window into the brain.” Using this method, researchers are able to pinpoint where in the brain these abnormal protein deposits are accumulating.

Researchers compared the FDDNP brain scans of 20 older adults between ages 60 to 82 who had been diagnosed with MDD with the scans of 19 healthy controls of similar age, education and gender. 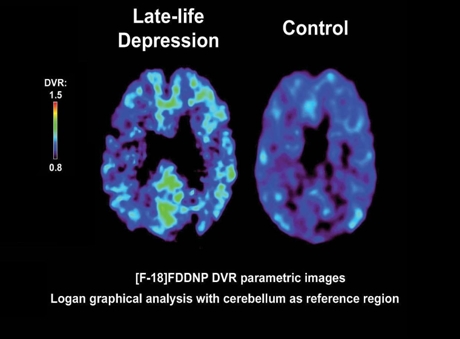 They found that in patients with MDD, FDDNP binding was significantly higher throughout the brain and in critical brain regions, including the posterior cingulate and lateral temporal areas, that are involved in decision-making, complex reasoning, memory and emotions.

“This is the first study using FDDNP to assess the abnormal protein levels in brains of older adults with severe depression,” said the study’s senior author, Dr. Gary Small, UCLA’s Parlow-Solomon Professor on Aging and a professor of psychiatry at the Semel Institute for Neuroscience and Human Behavior at UCLA. “The findings suggest that the higher protein load in critical brain regions may contribute to the development of severe depression in late life.”

Researchers also found that similar protein deposit patterns in the lateral temporal and posterior cingulate areas in patients were associated with different clinical symptoms. Some patients demonstrated indicators of depression only, while others displayed symptoms of mild cognitive impairment as well.

Dr. Small noted that previous research has shown that depression may be a risk factor for or a precursor to memory loss, such as mild cognitive impairment, which can later lead to dementia.

“We may find that depression in the elderly may be an initial manifestation of progressive neurodegenerative disease,” said the study’s first author, Dr. Anand Kumar, the Lizzie Gilman Professor and department head of psychiatry at the University of Illinois at Chicago. “Brain scans using FDDNP allow us to take a closer look at the different types of protein deposits and track them to see how clinical symptoms develop.”

According to Kumar and Small, more follow-up over time is needed to evaluate the significance of the outcomes of the study’s patient subgroups. Such research will help further assess if depression later in life might be a precursor to mild cognitive impairment and dementia.

In addition, the researchers said, FDDNP used with PET may also be helpful in identifying new treatments and in tracking the effectiveness of current antidepressant therapy and medications designed to help reduce abnormal protein build-up in the brain.

The team is planning larger studies involving investigators at UCLA and the University of Illinois that will address the impact of the genetic marker APOE-4, which is a risk factor for dementia and Alzheimer’s disease.

This study was supported by the National Institutes of Health and the U.S. Department of Energy.

UCLA owns three U.S. patents on the FDDNP chemical marker. The Office of Intellectual Property at UCLA is actively seeking a commercial partner to bring this promising technology to market. Small and study author Dr. Jorge R. Barrio, a professor of molecular and medical pharmacology at the David Geffen School of Medicine at UCLA, are among the inventors. Disclosures are listed in the full study.