Nairobi, Kenya – 27 Jan 2014: IBM IBM today announced the results of a new study entitled ‘Setting the pace in Africa: How IT leaders deliver on the potential of emerging technologies’, which found that while nearly 87 percent of African IT leaders rank new technologies such as analytics, cloud, mobile and social media as being critical to business success, only 53% are pushing forward with adoption.

IBM’s survey findings also confirmed that 36% of the African businesses embracing emerging technologies could be considered “Pacesetters” amongst their peers in terms of their focus on prioritizing and rapidly adopting technologies. The survey of 180 Africa-based IT leaders across 29 industries in Egypt, South Africa, Kenya, Nigeria and Morocco was conducted by IBM’s Center for Applied Insights, in collaboration with the IBM Center for CIO Leadership*. 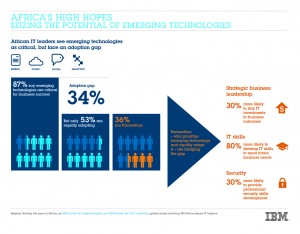 African economies are expected to sustain high levels of economic growth over the next decade, boosting consumer-facing industries by an estimated US$400 billion by 2020. Sectors pegged for growth include retail/wholesale, retail banking, telecommunications and tourism.1 This represents an enormous opportunity for African businesses – if they are prepared to seize it.

However, the IBM study found that a lack of technology adoption is preventing many African businesses from achieving growth and progress. “The primary reasons for not moving on adoption were a need for technology leaders to play a greater role in strategic business leadership, a lack of IT skills development across the continent, and information security concerns,” said IBM General Manager for East Africa, Nicholas Nesbitt.

Forward-thinking African companies have found ways to empower their IT leaders through a cultural shift, the report adds. The Pacesetters also garner management support and view IT as integral to business strategy, not just a supporting player in the company’s success. This level of internal engagement requires clear, open communication and collaboration between IT leaders and their business peers, something the Pacesetters do 40 percent more often, according to the IBM survey.

“Africa is characterised by an innovative mindset, and a billion-strong market ready for

innovative products and solutions,” Nesbitt said. “Regardless of individual realities, the opportunity for business growth through IT adoption cannot be denied. The Pacesetters in Africa’s business community have seen the potential and taken action to help them realise it. With the right strategy, their peers can follow suit.”

More information on the release at https://ibm.co/1mL5GsW

*The IBM Center for Applied Insights (ibm.com/ibmcai) introduces new ways of thinking, working and leading. Through evidence-based research, the Center arms leaders with pragmatic guidance and the case for change.

The IBM Center for CIO Leadership (centerforcioleadership.com) is an international, cross- industry peer community solely focused on the advancement of business competencies for technology professionals through peer insights and connections, education and research. The Center provides CIOs from around the world with access to a global community of academic and practitioner experts, peer CIOs and business leaders with a common goal of advancing the CIO profession and providing professional development.