Automated remote photography is a convenient, labor-saving research tool for tracking leaf function and doing forest research. But does photography mirror what’s actually happening on the ground? A new study finds photography accurately tracks the timing of red pigments in the fall, but the timing of green in the spring and summer — not so much.

PROVIDENCE, R.I. [Brown University] — Every picture tells a story, but the story digital photos tell about how forests respond to climate change could be incomplete, according to new research.

Scientists from Brown University and the Marine Biological Laboratory have shown that the peak in forest greenness as captured by digital pictures does not necessarily correspond to direct measures of peak chlorophyll content in leaves, which is an indicator of photosynthesis. The study, which focused on a forest on Martha’s Vineyard, has significant implications for how scientists use digital photos to study forest canopies.

The work was led by Xi Yang, a graduate student at Brown and MBL and is published online in the Journal of Geophysical Research: Biogeosciences. 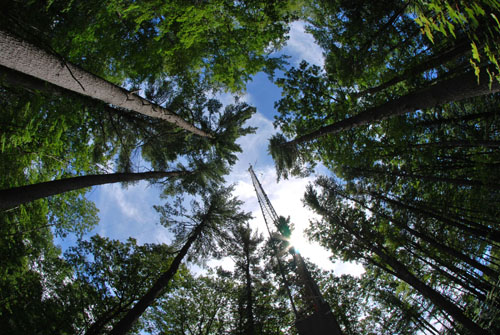 What color is your canopy? An automated camera on a tower above the forest canopy can record seasonal changes in overall leaf color, but photos might not always correspond to seasonal biochemical changes within leaves themselves. Image credit: Marc Mayes/Brown University

The use of digital photography to study how forests change has increased in recent years. The technology provides an inexpensive way to monitor forest change closely over time, an approach that isn’t labor-intensive. Cameras can be set up, programmed to take pictures at certain intervals, and then left to do their thing for long periods. This type of research has produced significant findings in recent years. Researchers are currently using networks of cameras around the country to monitor the timing of when leaves sprout in the spring and drop in the fall. Both events are expected to be sensitive to climate change.

Using cameras to see when leaves sprout and when they fall off is one thing, but Yang and his colleagues wanted to see how well photos could capture what happens in between. Could cameras be used to tell when leaves reach peak photosynthesis in the summer or when photosynthesis slows in the fall? 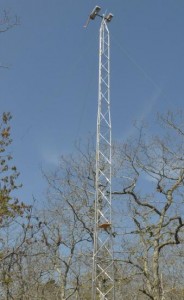 Leaf-peepers. Photography does a better job gathering data on the timing of red pigments in the fall than tracking the greening of spring and summer. Image credit: Xi Yang/Brown University

“The key question we want to address is our study here is what can the camera tell us about the function of the plants,” Yang said.

To find out, Yang placed a camera on a 50-foot tower above the canopy of the Manuel F. Correllus State Forest on Martha’s Vineyard, Mass. The camera took photos every hour between 10 a.m. and 3 p.m. each day from April to November 2011. During that same period, Yang and his colleagues took weekly leaf samples from the forest and tested them in the lab. In spring, they measured levels of chlorophyll, the molecule that helps leaves photosynthesize — turn light into energy — and gives them their green color. In the fall, they looked for the pigments that cause leaves to turn red.

Using careful color analysis, Yang and his colleagues found that the photos reached their peak greenness around June 9. The lab tests, however, showed that chlorophyll measurements didn’t peak until 20 days later.

“That means that if you want to use the greenness from the camera as an indicator of plant function in the spring, you might be wrong because they do not match very well,” Yang said. “This is a warning for future study.”

The implications are most significant for the studying how forests regulate the amount of carbon dioxide in the atmosphere, Yang says. Plants absorb carbon dioxide as they photosynthesize, and absorption peaks when photosynthesis does. Knowing the timing of the peak can be important for accurate measurements. “If you don’t get it right,” Yang says, “you might miss a lot of the carbon absorption.”

The news wasn’t all bad for the cameras, however. The study showed that peak leaf senescence — the increase in red pigments in the fall — was captured quite well by the cameras. The timing of peak redness in the camera data matched peak of red pigment found in the lab studies. That’s important for researchers to know, but could also be useful for tourism officials in places like Vermont, where leaf peepers plan trips to take in the fall colors. The researchers also compared their ground-based photos with color data from a satellite looking at the same forest over the same period of time. Those data matched fairly well. That suggests that cameras are a good way to validate data from satellites.

“This is really exciting because we can now take a simple measure of color, tie it quantitatively to plant seasonal activity, and ultimately link this to satellite observations where we think changes in plant cycles due to climate change are being expressed on a global scale,” said Jack Mustard, professor of geological sciences at Brown. Mustard and Jianwu Tang at MBL are Yang’s Ph.D. advisers and authors on the paper.

Yang expects cameras will continue to play a significant role in climate and forest research. But in light of these findings, researchers need to use a bit of caution.

“If you want to use cameras for the study of plant function,” Yang said, “you want to be careful, especially in the spring.”