IBM Sets the Stage for the Next Era of Computing

ARMONK, N.Y. – 11 Apr 2012: IBM today announced a major step forward in a new, simpler era of computing with the introduction of a new category of “expert integrated systems.” This new family is the first with built-in expertise based on IBM’s decades of experience running IT operations for tens of thousands of clients in 170 countries.

IBM’s expert integrated systems family – PureSystems – is the result of $2 billion in R&D and acquisitions over four years, an unprecedented move by IBM to integrate all IT elements, both physical and virtual. The new systems family offers clients an alternative to today’s enterprise computing model, where multiple and disparate systems require significant resources to set up and maintain.

The prime challenge facing companies worldwide is the need to spend 70 percent or more of IT budgets on simple operations and maintenance, leaving little to invest in innovation.[1] Two-thirds of corporate IT projects are delivered over budget and behind schedule, according to a recent study by IBM which also found that only one in five corporate IT departments are able to spend the majority of their IT budget on innovation. To join the conversation, visit #IBMPureSystems on Twitter. 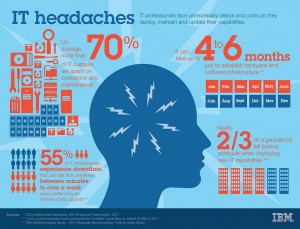 With the introduction of the new PureSystems family, IBM is unveiling three major advances that point to a new era of computing technology that is designed to allow businesses to slash the high costs and nagging complexity associated with managing information technology.

· “Scale-In” System Design: With PureSystems, IBM is introducing a new concept in system design that integrates the server, storage, and networking into a highly automated, simple-to-manage machine. Scale-in design provides for increased density – PureSystems can handle twice as many applications compared to some IBM systems, doubling the computing power per square foot of data center space.[2]

· Patterns of Expertise: For the first time, IBM is embedding technology and industry expertise through first-of-a-kind software that allows the systems to automatically handle basic, time-consuming tasks such as configuration, upgrades, and application requirements.

· Cloud Ready integration: Out of the box, all PureSystems family members are built for the cloud, enabling corporations to quickly create private, self-service cloud offerings that can scale up and down automatically.

“With its new scale-in design and built-in expertise, PureSystems represents an important advance in the evolution of computing,” said Steve Mills, senior vice president and group executive, software and systems, IBM. “By tightening the connections between hardware and software, and adding incomparable software know-how, PureSystems is designed to help clients to free up time and money to focus on innovation that many businesses cannot address due to ever rising costs and staffing needs in the traditional data center.”

PureSystems’ scale-in design integrates and optimizes all of the critical components required in today’s data center – system networking, storage, compute, management, etc. — and provides for a single-view management system. The result is a system that is intuitive to set up and can be far less expensive to maintain and upgrade. For example, PureSystems can go from its single shipping crate to being up and running in one-third the time as compared to other IBM technology.[3]

At the center of the PureSystems is new software capability – “patterns of expertise” — that enables operational know-how and knowledge to be built directly into the systems. This first-of-a-kind approach converts technology expertise into reusable, downloadable packages. Patterns are available in three categories:

With PureSystems, IBM is taking the unprecedented step to completely integrate all of the technology components needed to stand up a private cloud system in minutes. By combining the virtualized servers, storage and networking found in PureSystems with cloud management software, IT organizations have a ready-to-go “cloud system in a box” — giving them a foundational private cloud environment that can be expanded. The PureSystems cloud is delivered with built-in security, with no single point of failure.

To significantly accelerate the use of the cloud, IBM has included a cloud self-service and provisioning interface directly into PureSystems. An application developer, for example, can use the self-service feature to configure a cloud environment application without any help from the IT department. PureSystems will sense and respond to the needs of the running applications and services and make decisions on how best to deploy IT resources while ensuring maximum efficiency, performance, and control.

Credit-qualified clients that elect financing can see immediate benefits with PureSystems while deferring their first payment for 90 days. Flexible financing options provided by IBM Global Financing[4] make it simple for clients to acquire PureSystems, while enabling them to manage budgets more easily with predictable payments. IBM Global Asset Recovery Services can buy back servers, including those made by HP and Oracle, for clients migrating to IBM PureSystems.

[4] IBM Global Financing offerings are provided through IBM Credit LLC in the United States and other IBM subsidiaries and divisions worldwide to qualified commercial and government clients. Rates and availability are based on a client’s credit rating, financing terms, offering type, equipment and product type and options, and may vary by country. Non-hardware items must be one-time, non-recurring charges and are financed by means of loans. Other restrictions may apply. Rates and offerings are subject to change, extension or withdrawal without notice and may not be available in all countries.