IBM and USTA continue to evolve the US Open for fans, tennis players, and coaches with AI and hybrid cloud technology

“Over the nearly 30 years we have partnered with the US Open, we have seen first-hand the enormous amount of tennis data generated over the course of a two-week tournament,” said Noah Syken, Vice President, Sports & Entertainment Partnerships, IBM. “In partnership with the USTA, we continue to leverage artificial intelligence and analytics on the cloud to harness this data and deliver a best-in-class digital and onsite experience for millions of fans. With Coach Advisor, we’re proud to now bring these advanced technologies to USTA coaches directly to tap into new data sources, so they can drive a deeper analysis of the game and support the growth and development of U.S. tennis players.” 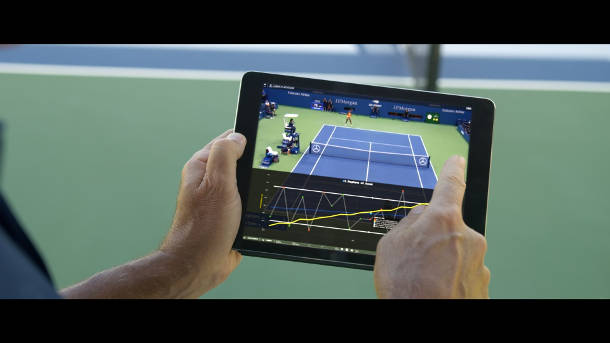 At the 2019 US Open, the USTA and IBM are introducing Coach Advisor, a new technology solution that puts AI and analytics in the hands of USTA coaches to help drive a new level of insight into tennis player performance. Image credit: IBM

Uncovering an Entirely New Set of Data
Traditionally, in order to assess an athlete’s mechanics and endurance, coaches have relied on player feedback and instinct. A demanding athletic test, a tennis match can last for several hours and require an athlete to run anywhere from one to six miles back and forth on a court. To better understand and quantify fatigue and energy, IBM has uncovered a new data set called the Energy System, which is comprised of two components – Physiological Load and Mechanical Intensity – that evaluate the total work of the athlete to measure his or her physical performance over a period of time:

Energy System metrics are combined with traditional tennis statistics and match video in the Coach Advisor portal for coaches to review, point-by-point. Using this tool, coaches can quickly identify key moments in matches and understand the relationship between physical exertion and player performance.

“The USTA is dedicated to developing the next generation of world-class American tennis players, and Coach Advisor offers our coaches access to all-new data to drive performance,” said Martin Blackman, General Manager, USTA Player Development. “We are excited to continue our work with IBM to pair analytics with our coaching expertise, and believe IBM Coach Advisor will give us a competitive advantage to help change the paradigm of tennis coaching and development in the U.S.”

Coach Advisor also relies on IBM AI to automate match video capture. Analyzing match video has traditionally been a time consuming, days-long, manual process for the USTA staff. Artificial intelligence trained to detect the sounds of ball strikes, umpire calls, crowd noise or even the sound of sneakers on the court, determines the start of a point, and then indexes every point in a match. This enables coaches to view an entire match soon after it is completed, drill down into critical moments in a game, and save time by not manually processing video. Coach Advisor augments a coach’s expertise with data analysis to help the USTA team operate more efficiently and focus on supporting players.

Coach Advisor is currently in its initial phase with a select group of players and their coaches and is planned to be rolled out over time to the broader population of American players and coaches.

Enhancing the Fan Experience at the 2019 US Open
In addition to changing the game for professional tennis coaches at the 2019 US Open, IBM will continue to evolve the digital experience for the millions of fans who follow the tournament, as well as those who visit the Billie Jean King National Tennis Center.

The USTA has also adopted a hybrid cloud strategy that enables IBM to take the tremendous amount of tennis data, scores, stats, sights and sounds, and serve up unique and enhanced experiences both digitally and onsite, using a mix of public cloud, private cloud and on-premises systems. Designed by IBM iX, the global business design arm of IBM Services and one of the world’s largest digital agencies, enhancements for 2019 include:

Behind the scenes, the US Open digital experiences will be running for the first time on Red Hat OpenShift on the IBM Cloud. This new architecture will allow the USTA to scale up to meet increasing demand to US Open digital platforms over the tournament, deliver an enhanced fan experience to the USOpen app and website, while also maintaining the highest levels of security. This enables USTA to focus on delivering new innovations with data and AI such as Coach Advisor, while deploying and managing workloads across cloud environments. IBM Watson for Cyber Security also helps protect the U.S. Open digital platforms against cyberattacks throughout the two-week tournament.

The US Open runs from August 26 through September 8. Visit the Apple and Android app stores to download the US Open apps for mobile devices.