ARMONK, N.Y. – 11 Feb 2011: IBM today announced that eight universities are collaborating with IBM Researchers to advance the Question Answering (QA) technology behind the “Watson” computing system, which will compete against humans on the quiz show, Jeopardy!, airing February 14-16.

Watson’s QA technology uses breakthrough analytics to understand what is being asked, analyze massive amounts of data, and provide the best answer based on the evidence it finds. The ongoing research collaborations announced today will help advance Watson’s ability to transform the way businesses and society work and improve all kinds of industries, such as healthcare, banking, government, etc.

“We are glad to be collaborating with such distinguished universities and experts in their respective fields who can contribute to the advancement of QA technologies that are the backbone of the IBM Watson system,” says Dr. David Ferrucci, leader of the IBM Watson project team. “The success of the Jeopardy! challenge will break barriers associated with computing technology’s ability to process and understand human language, and will have profound effects on science, technology and business.”

A team of researchers from Carnegie Mellon University, led by Eric Nyberg, professor, Language Technologies Institute, Carnegie Mellon University School of Computer Science, assisted IBM in the development of the Open Advancement of Question-Answering Initiative (OAQA) architecture and methodology. CMU also made two direct contributions to Watson: a source expansion algorithm which identifies the best text resources for answering questions about given topic, and an answer-scoring algorithm which improves Watson’s ability to recognize when a candidate answer is likely to be correct. 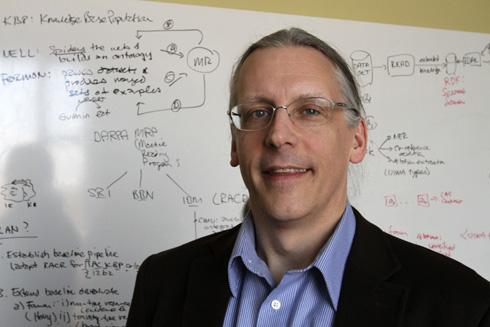 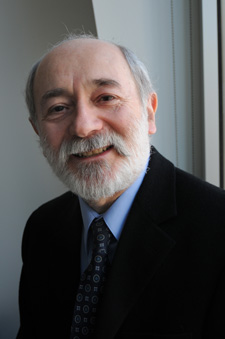 A team of researchers from Massachusetts Institute of Technology, led by Boris Katz, principal research scientist at MIT's Computer Science and Artificial Intelligence Laboratory, is working with IBM Researchers on the development of the Question Answering (QA) technology behind the "Watson" computing system, which will compete against humans on the quiz show, Jeopardy!, airing February 14-16. Image credit: IBM

START, which has the ability to answer questions with high precision using information from semi-structured and structured information repositories. The underlying contribution to the Watson system is the ability to break down the question into simple sub-questions for responses to be quickly collected and then fused back together to come up with an answer. The Watson system architecture also took advantage of the object-property-value data model pioneered by MIT, which enables the information in semi-structured data sources to be effectively retrieved in response to natural language questions.

A team of researchers from the University of Southern California Viterbi School of Engineering, led by Eduard Hovy, director of the Human Language Technology Group at Viterbi School’s Information Sciences Institute, is focused on large-scale Information Extraction, Parsing, and knowledge inference technologies with the goal of converting large amounts of international source materials into the general knowledge resources of the system, and reasoning with this knowledge to find inconsistencies and gaps.

University of Texas at Austin

Bruce Porter, professor and department chairman, Department of Computer Science, University of Texas at Austin, has been working on automated reasoning and automated QA for 25 years. His group of researchers from the University of Texas, including Dr. Ken Barker, research scientist, is working to extend the capabilities of Watson, with a focus on extensive common sense knowledge. The goal is to help the system answer questions by developing a computational resource of common sense knowledge.

Raymond Mooney, professor, Department of Computer Science, University of Texas at Austin, has been working on natural language processing and machine learning for 25 years. His research group works on developing computational methods for processing text, focusing on systems that automatically learn to map language into a logical representation of its meaning. In particular, they have developed methods that learn to extract knowledge from text, a key requirement for the Watson system. 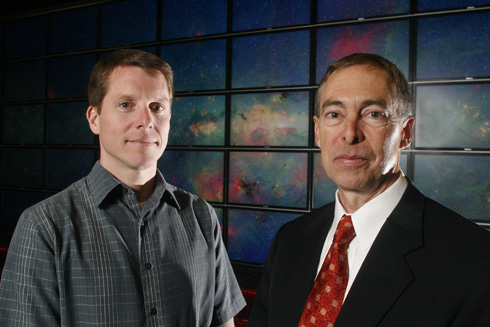 Ken Barker (on left), research scientist, Department of Computer Science and Bruce Porter, professor and department chairman, Department of Computer Science, and a team of researchers from the University of Texas at Austin are collaborating with IBM Researchers to advance the Question Answering (QA) technology behind the "Watson" computing system, which will compete against humans on the quiz show, Jeopardy!, airing February 14-16. Image credit: IBM

A team of researchers from Rensselaer Polytechnic Institute, led by Barbara Cutler, assistant professor in the Computer Science Department, is working on a visualization component to visually explain to external audiences the massively parallel analytics skills it takes for the Watson computing system to break down a question and formulate a rapid and accurate response to rival a human brain.

Professor Tomek Strzalkowski and his team of researchers from the University at Albany have developed an interactive QA capability for sustained investigation. When investigating a complex topic, you rarely receive the answer you need by asking just one question; rather you ask a series of questions to determine the solution. This technological advancement enables a computing system to remember the full interaction, rather than treating every question like the first one – simulating a real dialogue.  While not applicable for the specific Jeopardy challenge given the nature of the quiz format, IBM is working with UAlbany to integrate this capability into the Watson system for the future as this capability has significant applicability to numerous industry scenarios such as healthcare, government, financial services, etc.

A research team from the University of Trento, led by Professor Giuseppe Riccardi and Professor Alessandro Moschitti, is focused on machine learning, question answering and conversational agents. The aim of their ongoing collaboration with IBM is to explore advanced machine learning techniques along with rich text representations based on syntactic and semantic structures for the optimization of the IBM Watson system. The team has developed technology based on the latest results of the statistical learning theory (e.g. kernel methods) applied to natural language understanding. This has already increased Watson’s ability to learn from the questions it is asked (e.g. automatic Jeopardy cue classification). Learning to handle the uncertainty in the selection of the best answer (e.g. ranking the answer list) from those found by Watson’s search algorithms also has been one of their main research directions.

Professor James Allan and his team of researchers from the University of Massachusetts are working on information retrieval, or text search. This important capability of QA technology is the first step taken: looking for and retrieving text that is most likely to contain accurate answers. The system’s deep language processing capabilities then analyze the returned information to find the actual answers within that text.

“Applying QA technology to the real-time Jeopardy! problem is an important challenge for the field because it requires a system to respond more quickly and with a level of confidence that has not been possible to-date,” says Professor Eric Nyberg, CMU.  “Jeopardy! requires forms of reasoning that are quite sophisticated, using  metaphors, puns, and puzzles that go beyond basic understanding of the language. As a challenge problem, Jeopardy! will stretch the state of the art.”

The OAQA Initiative, established in 2008 by IBM and Carnegie Mellon University, aims to provide a foundational architecture and methodology for accelerating collaborative research in automatic question answering.  By making long term commitments to an architecture that supports and standardizes simultaneous research experiments, the OAQA is accelerating the advancement of QA technologies.

A recent OAQA achievement includes the development of open source software to serve as a platform that better enables student and other participant contributions to QA enhancements.

For more information about the Watson computing system and the Jeopardy! challenge, please visit: https://www.ibmwatson.com