Looking at a Tough Hill to Climb? Depends on Your Point of View

COLUMBUS, Ohio — People tend to overestimate the steepness of slopes – and psychologists studying the phenomenon have made a discovery that refutes common ideas about how we perceive inclines in general.

For more than a decade, researchers thought that our judgment was biased by our fatigue or fear of falling, explained Dennis Shaffer, associate professor of psychology at Ohio State University’s Mansfield campus. We perceive climbing or descending hills as difficult or dangerous, so when we look at an incline, our view is clouded by the expected physical exertion or danger of traversing it.

For a study in the current issue of the journal Psychological Science, Shaffer and then-undergraduate student Mariagrace Flint uncovered a contradiction, when they compared how we perceive the angle of stairs versus escalators.

“We found that people tend to overestimate a slant even when they are looking at an escalator, and climbing or descending it would require practically no effort at all,” Shaffer said. 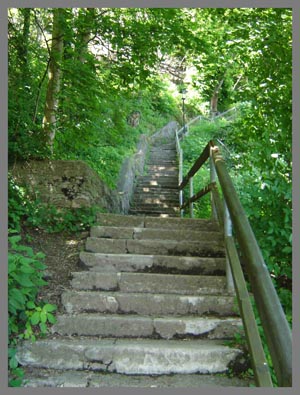 On average, people consistently overestimated the slant by 18-19 degrees, regardless of whether they were looking at a set of stairs or an escalator, from the top or from the bottom. The actual slope of the steps was 25 degrees, and the slope of the escalator was 30 degrees, but people judged them to be an average of 44 degrees and 48 degrees, respectively.

“In fact, their overestimates were virtually identical,” Shaffer said.

The study adds to a growing body of evidence that body-based factors, such as climbing effort or perceived danger, do not have the strong influences on our perception of slant that researchers once thought.

At least, Shaffer added, we can take comfort that our misperceptions are consistent.

“The range of effort required for different activities – walking or running, riding a bike or a ski lift, driving or riding in a car, or riding an escalator – is large, and it depends on whether we’re feeling energized or fatigued,” he said.

“The constancy of slant perception shown here, like other perceptual constancies such as size, color, lightness, and orientation, guarantees that our perception of important features in the real world remains stable across large variations in viewing conditions.”

He suspects that our perception of slant is biased by a more basic misperception: the angle of our gaze. People, he says, tend to think they are looking downward at a sharper angle than they actually are.

“If people believe they are looking more downward towards the bottom of the hill, and the hill looks perpendicular to their line of sight from there, the hill could look steeper to them,” he said. “But this hasn’t been tested – we’re working on that next.”

Shaffer is also studying a related effect: why, when viewing a hill from below, we overestimate slant more as we stand farther away – up to a distance of 50 meters, when our estimates level off.

Despite the apparent constancy of our misperceptions, Shaffer maintains that it’s possible for people to learn to judge slopes more accurately.

“I’ve had roofers take my class before, and they always seem to be accurate with their estimations,” he said.