Humans Have Love-Hate Relationship With the Environment

Human/environment interactions have a history as long as the existence of our species on the planet.

Hominid ancestors began polluting their environment nearly 700,000 years ago with the control of fire, and humans have not looked back since.

The modern phenomenon of global warming is very likely the direct result of human pollution and destruction of the environment, said James Watson, a University of Arizona assistant professor in the School of Anthropology. 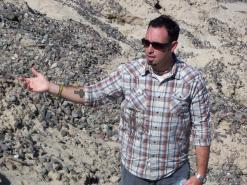 UA anthropologist James Watson gives a tour of the La Playa site, which he is studying. The site is located in northern Sonora, Mexico. (Photo courtesy of James Watson)

Most scientists recognize the steep increase in toxic gases, such as methane, that have been released into the atmosphere in large quantities starting at the beginning of the Industrial Revolution, Watson said.

By all appearances, the interaction between humans and the environment is mainly unidirectional – in which the environment continues to deteriorate as global human populations swell.

But Mother Nature does have her say.

Major natural disasters within the past decade have resulted in significant losses of human life and property and have directly affected how humans adapt and continue to live in these areas.

Watson, also the assistant curator of bioarchaeology at the Arizona State Museum, has been conducting research in both the southern Arizona and northern Mexico regions to better understand how humans and the environment in the Sonoran Desert interacted in the past.

In particular, Watson’s research focuses on how humans have used the landscape to their advantage, and also how the landscape determines how humans can use it based on the level of technological complexity available to them at the time.

The chapters describe how long-term environmental trends encourage stable adaptations within local environments, but when climate changes, it can be quick and human groups must adapt equally as quickly, resulting in confusing signatures in the archaeological record. 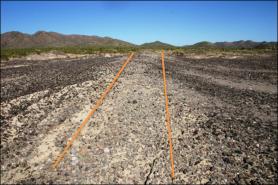 Watson said early farmers used the steep slope of the La Playa site, located in northern Sonora, to create constant water flow through an extensive irrigation network, which contributed too much of the soil deposition from 4,500 years ago to about 2,000 years ago. (Photo courtesy of James Watson)

Watson’s recent research in northern Mexico describes how the earliest village settlements in the Sonoran Desert utilized the geomorphological characteristics of local landscapes to facilitate a sophisticated form of irrigation agriculture. These indigenous technological advances date to nearly 3,000 years ago and represent some of the earliest canal irrigation in North America.

“The story is really about indigenous ingenuity and adaptation to climate change,” Watson said.

“When climate ameliorated at the beginning of the late Holocene and domesticated crops like maize were introduced, we see a unique response among early village communities in the Sonoran Desert through the development of irrigation systems.”

Watson’s research highlights the importance of understanding the role of humans in constructing environments in the past and how environmental change – both long term and small scale – causes human populations to react and alter their adaptive strategies.

The results of the recently published studies identify that early farmers in the Sonoran Desert successfully adapted to both large and small environmental changes by employing different technological strategies.

“Humans have been modifying their environment since time immemorial…it is simply a question of scale,” Watson said.

Specific examples from the chapters he co-authors describe how early farmers used the steep slope of the La Playa site, located in northern Sonora, to create constant water flow through an extensive irrigation network, which contributed to much of the soil deposition from 4,500 years ago to about 2,000 years ago.

After that time, a major drying trend and possibly drought conditions contributed to major erosion events and caused the reconfiguration of settlements throughout the region.

This is identified at La Playa as a concentrated layer of artifacts in the site’s stratigraphy, just below the modern ground surface, where the objects had eroded out of their original contexts and spread around the site by natural processes, such as erosion and water.

“The site is currently undergoing extensive erosion, which is the result of modern environmental conditions and recent historical processes,” Watson said.

“Whether it’s burning grasslands to encourage certain plant species to grow, or creating artificial environments by building large urban centers, these are attempts to control the uncertainty inherent in living in the natural world and it backfires when fluctuations in climate cause environmental change,” Watson also said.

“Yet humans continue to adapt and consume natural resources faster than they can be replenished.”