Samuel Mathey, a graduate student in the Department of Economics at the University of Delaware, has become the first doctoral student in the Alfred Lerner College of Business and Economics to successfully defend a dissertation via Skype.

On Tuesday, June 12, Mathey’s dissertation committee sat in a Pearson Hall video conference room on UD’s Newark campus while he attended his defense virtually from France.

“Congratulations to Samuel for being the first of over 50 dissertation defenses to defend via Skype,” said Abrams. “And the technical linkage worked flawlessly thanks to work done by Sheldon and the staff at Pearson Hall.”

“I had been working remotely with my adviser and the committee over the past three years,” said Mathey. “Once I completed the dissertation manuscript it was difficult to arrange a time for me to complete the oral defense given my location and the committee members’ schedules.”

To avoid costly travel and conflicting schedules the team began to consider using Skype, a software application that enables users to connect virtually over the Internet.

According to Mathey, the department held a meeting to discuss UD’s regulations regarding dissertation defenses as well as the technical issues before approving his use of Skype. 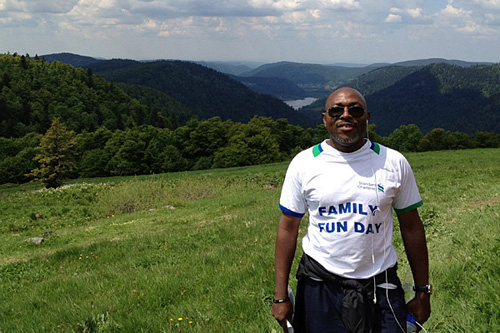 Samuel Mathey, a doctoral candidate in the Alfred Lerner College of Business and Economics, is the first UD student to successfully defend his dissertation using Skype. Image credit: University of Delaware

“The technical team put together a test run to address various parameters like speed of connection, time lag, light, voice and sounds, and the possibility of sharing a screen and presentation from France,” said Mathey.

The conditions were deemed appropriate and a final test was run two days prior to the defense just to be sure all was in order.

“On the day of the defense there was a two-minute bug with Skype but the UD team quickly resolved that issue and the defense went smoothly through the end with the help of Sheldon and Stacy,” said Mathey.

Mathey, who is currently a management and strategy professor in France, has research interests in economic development, HIV, foreign direct investment (FDI) and business strategy.

In the first essay, Mathey researched HIV and FDI effects on per capita income growth in Africa; in the second, he studied the home country variables that affect the remittances behavior, or act of money transfer to relatives back home, of immigrants.

Mathey’s findings in the first essay suggested the existence of a tipping point in a country’s national HIV prevalence rate where the disease’s effects on the per capita GDP growth worsen. He also suggested African countries need good policies to maximize the effect of FDI on economic growth.

“The essay results equally suggest the existence of conditions where foreign aid can complement remittances and both flows increase simultaneously, contrary to the current orthodoxy that an increasing flow of foreign aid to a country reduces the flow of remittances,” said Mathey.

Mathey began his education in West Africa in a master in economics program after completing a computer engineering degree. In 2005, he moved to the United States to begin his master’s in economics and econometrics, which he completed at UD in 2007.

While at UD, Mathey was a volunteer firefighter, a volunteer mentor for children at a local church and senator of graduate students in economics.

Mathey continued his studies at UD in the doctoral program in economics, marked by a two-year leave in 2008.

During that leave, Mathey completed an MBA in strategy and consulting from Ohio State University’s Fisher College of Business and worked for four months at the United Nations headquarters in New York.

Upon completion of the MBA, Mathey returned to UD to present his proposal for the doctoral degree.

In 2010, he accepted a teaching position at the Université de Nancy II’s ICN Business School, where he continues to teach in both English and French.

Mathey resides in France and has four children — Abraham, Pearl, Othniela and Grace — with his wife, Prisca.

He continues to work on a variety of publications and recently created a foundation with a Facebook group on African economics and African entrepreneurs.