How to Tell When Someone’s Lying

When someone is acting suspiciously at an airport, subway station or other public space, how can law enforcement officers determine whether he’s up to no good?

The ability to effectively detect deception is crucial to public safety, particularly in the wake of renewed threats against the U.S. following the killing of Osama bin Laden.

UCLA professor of psychology R. Edward Geiselman has been studying these questions for years and has taught investigative interviewing techniques to detectives and intelligence officers from the FBI, the Department of Homeland Security, the Marines, the Los Angeles police and sheriff’s departments, and numerous international agencies.

He and three former UCLA undergraduates — Sandra Elmgren, Chris Green and Ida Rystad —analyzed some 60 studies on detecting deception and have conducted original research on the subject. They present their findings and their guidance for how to conduct effective training programs for detecting deception in the current (April) issue of the American Journal of Forensic Psychiatry, which is published this week. 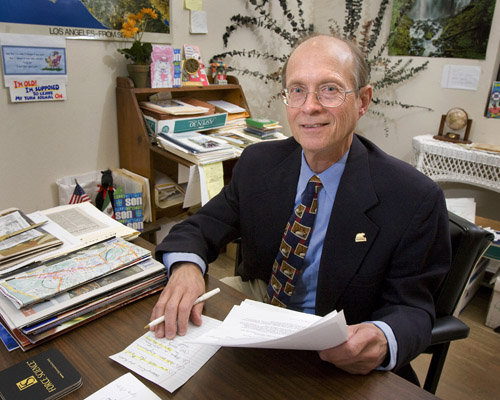 Geiselman and his colleagues have identified several indicators that a person is being deceptive. The more reliable red flags that indicate deceit, Geiselman said, include:

• When questioned, deceptive people generally want to say as little as possible. Geiselman initially thought they would tell an elaborate story, but the vast majority give only the bare-bones. Studies with college students, as well as prisoners, show this. Geiselman’s investigative interviewing techniques are designed to get people to talk.

• Although deceptive people do not say much, they tend to spontaneously give a justification for what little they are saying, without being prompted.

• They tend to repeat questions before answering them, perhaps to give themselves time to concoct an answer.

• They often monitor the listener’s reaction to what they are saying. “They try to read you to see if you are buying their story,” Geiselman said.

• They often initially slow down their speech because they have to create their story and monitor your reaction, and when they have it straight “will spew it out faster,” Geiselman said. Truthful people are not bothered if they speak slowly, but deceptive people often think slowing their speech down may look suspicious. “Truthful people will not dramatically alter their speech rate within a single sentence,” he said.

• They tend to use sentence fragments more frequently than truthful people; often, they will start an answer, back up and not complete the sentence.

• They are more likely to press their lips when asked a sensitive question and are more likely to play with their hair or engage in other “grooming” behaviors. Gesturing toward one’s self with the hands tends to be a sign of deception; gesturing outwardly is not.

• Truthful people, if challenged about details, will often deny that they are lying and explain even more, while deceptive people generally will not provide more specifics.

If dishonest people try to mask these normal reactions to lying, they would be even more obvious, Geiselman said. Among the techniques he teaches to enable detectives to tell the truth from lies are:

• Have people tell their story backwards, starting at the end and systematically working their way back. Instruct them to be as complete and detailed as they can. This technique, part of a “cognitive interview” Geiselman co-developed with Ronald Fisher, a former UCLA psychologist now at Florida International University, “increases the cognitive load to push them over the edge.” A deceptive person, even a “professional liar,” is “under a heavy cognitive load” as he tries to stick to his story while monitoring your reaction.

• Ask open-ended questions to get them to provide as many details and as much complete information as possible (“Can you tell me more about…?” “Tell me exactly…”). First ask general questions, and only then get more specific.

• Don’t interrupt, let them talk and use silent pauses to encourage them to talk.

If someone in an airport or other public space is behaving suspiciously and when approached exhibits a majority of the more reliable red flags, Geiselman recommends pulling him or her aside for more questioning. If there are only one or two red flags, he would probably let them go.

Geiselman tested techniques for telling the truth from deception with hundreds of UCLA students, and the studies he and his co-authors analyzed involved thousands of people.

Detecting deception is difficult, Geiselman said, but training programs can be effective. Programs must be extensive, with an education phase followed by numerous video examples, and a phase in which those being trained judge video clips and simulate real-world interviewing. Training should be conducted on multiple days over a period of a week or two.

“People can learn to perform better at detecting deception,” Geiselman said. “However, police departments usually do not provide more than a day of training for their detectives, if that, and the available research shows that you can’t improve much in just a day.”

When Geiselman conducted training with Marine intelligence officers, he found that they were impressively accurate in detecting deception even before the training began. In contrast, the average college student is only 53 percent accurate without training, and with abbreviated training, “we often make them worse,” he said.

“Without training, many people think they can detect deception, but their perceptions are unrelated to their actual ability. Quick, inadequate training sessions lead people to over-analyze and to do worse than if they go with their gut reactions.”

Geiselman is currently developing a training program that he hopes will effectively compress the learning curve and thus will serve to replicate years of experience.

The cognitive interview that Geiselman and Fisher developed works well with both criminal suspects and eyewitnesses of crimes. Geiselman thinks these techniques are likely to work in non-crime settings as well, but said additional research should be done in this area.

In the next year, Geiselman plans to teach police detectives techniques for investigative interviewing and spotting deception through the U.S. Department of Homeland Security’s Rural Policing Institute for underserved police departments. He says this will be a perfect fit for him because he comes from Culver, Ind., a small town that has fewer residents than UCLA has psychology majors.

Later this month, Geiselman will travel to Hong Kong to provide training in investigative interviewing to the Independent Commission Against Corruption.

An instructional course Geiselman taught on investigative interviewing before the second Iraq war resulted in cognitive interviewing techniques that were used to interdict some insurgent activity in Iraq, perhaps saving many lives, he was later informed.