The Winners of Mass Extinction: With Predators Gone, Prey Thrives

In present-day ecology, the removal or addition of a predator in an ecosystem can produce dramatic changes in the population of prey species. For the first time, scientists have observed the same dynamics in the fossil record, thanks to a mass extinction that decimated ocean life 360 million years ago.

What was bad for fish was good for the fish’s food, according to a paper published online in Proceedings of the National Academy of Sciences. Researchers from the University of Chicago, West Virginia University and The Ohio State University found that the mass extinction known as the Hangenberg event produced a “natural experiment” in the fossil record, with results that mirror modern observations about predator-prey relationships.

“This is the first time that specific, long-term, predator-prey interactions have been seen in the fossil record,” said lead author Lauren Sallan, graduate student in organismal biology and anatomy. “It tells us a lot about the recovery from mass extinctions, especially mass extinctions that involved a loss of predators.”

Paleontologists know the Devonian Period, which spanned from 416 to 359 million years ago, as the Age of Fishes, a time of astonishing diversity for marine vertebrate species. That thriving world was devastated by the Hangenberg event, a mass extinction of unknown origin that set the stage for modern biodiversity.

But some species survived the carnage of the Hangenberg event. The next 15 million years in the fossil record are dominated by crinoids, species similar to modern sea lilies and related to starfish. So abundant and diverse were these marine animals that the period is known as the Age of the Crinoids; entire limestone deposits from the era are made up of crinoid fossils. 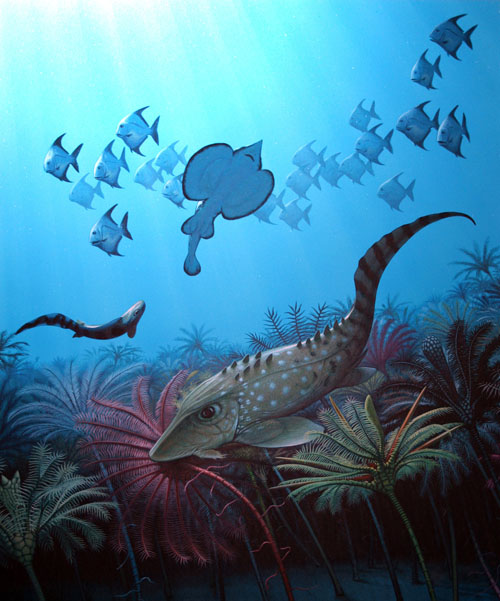 “We’ve been puzzled for many years as to why there were so many species and specimens of crinoids,” said study co-author Thomas Kammer, the Eberly College Centennial Professor of Geology at West Virginia University. “There had to be some underlying evolutionary and ecological reason for that.”

Researchers considered whether a change in the environment, such as water temperature or depth, could explain the crinoid explosion, Kammer said. Changes in predation also were proposed, but were hard to test using the fossil record.

“You don’t actually find the evidence of a fossil fish with a crinoid in its mouth very often,” Kammer said.

The riddle was solved through multi-institutional collaboration and data-sharing. A database of crinoid diversity in the fossil record assembled by Kammer and William Ausich, study co-author and professor of earth sciences at Ohio State University, was compared to a vertebrate dataset created by Sallan.

When the datasets were placed side by side and analyzed, a clear relationship emerged. As fish populations thrived in the Devonian, crinoid diversity and abundance remained low, despite favorable conditions. But after the Hangenberg event devastated fish species, crinoids thrived, diversifying and multiplying. The data suggests the ripple effects of a mass extinction upon ecosystems can last millions of years.

“This study demonstrates a clear example of processes that operate in ecological time — predator-prey relationships — becoming significant in evolutionary time,” Ausich said. “This means that ecological patterns and processes taking place today may have very long-reaching evolutionary effects. And although that idea may not seem particularly surprising at first, respected evolutionary biologists have long argued that it was not possible.”

Fossils even suggest that the long period of dominance had left the crinoids especially vulnerable to a new predator strategy. In the Devonian era, crinoids evolved hard, armored shells to defend against fish with sharp, “shearing” teeth. But when fish populations returned in force 15 million years after the Hangenberg event, those species used “crushing” teeth well suited for thwarting crinoid defenses.

The persistence of a once-beneficial trait that becomes obsolete should be called a “legacy adaptation,” the authors propose. In the absence of a predator-prey arms race, a species’ inherited defenses may become outdated, Sallan said.

“There’s a complete absence of predation pressure and the crinoids take off, but they retain their defenses as if they can’t get out of them,” Sallan said. “When a new form of predator appears, they can go directly for the best solution to cracking a crinoid, which is crushing. The Devonian-era armor of crinoids isn’t suited for defending against that attack, but they can’t lose it without losing all of their residual defenses.”