How the turtle got its shell

The turtle has been in no rush to give up the secret of its shell — but after two centuries of close study, scientists are filling in the story of a structure unique in the history of life.

New research led by Tyler Lyson of Yale University and the Smithsonian Institution pushes back the origins of the turtle shell by about 40 million years, linking it to Eunotosaurus, a 260-million-year-old fossil reptile from South Africa. The work strengthens the fossil record and bolsters an existing theory about shell development while providing new details about its precise evolutionary pathway.

“Now we’ve got an intermediate shell, a transitional form that bridges the gap between turtles and other reptiles and helps explain how the turtle shell evolved,” said Lyson, a curatorial affiliate of the Yale Peabody Museum of Natural History and a Smithsonian postdoctoral researcher. “Eunotosaurus is an early offshoot of the lineage that gave rise to modern turtles — it’s an early stem turtle.” 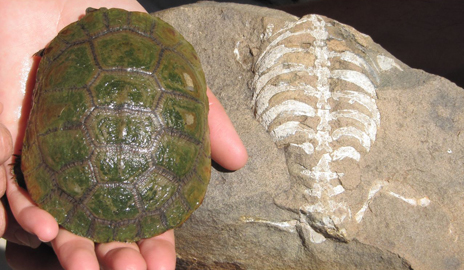 New research by Tyler Lyson of Yale University and the Smithsonian introduces a new proto-turtle and sheds new light on how the turtle got its shell. Image credit: Yale University

The research paper, “Evolutionary Origin of the Turtle Shell,” appeared online May 30 in the journal Current Biology.

Molecular divergence studies indicate turtles split from a stem ancestor about 270 million years ago. But until 2008, the oldest turtle fossils, dating to about 210 million years ago, already had fully developed shells, leaving shell evolution a mystery. That year a 220-million-year-old turtle-like fossil found in China showed a fully developed belly shell and broadened ribs, but not a full shell. This demonstrated that the shell did not form through the accretion of ossified scales — as in all other animals with shells, such as armadillos, various lizards, and placodonts — but rather through the broadening of the ribs and vertebrae.

Lyson’s analysis of more than 45 Eunotosaurus fossils — including new specimens and some of the most complete yet — reinforces and expands this view, showing some of the same features in an older animal and establishing a new proto-turtle.

The Eunotosaurus specimens have features found exclusively in turtles and in Eunotosaurus, researchers report — including nine broadened ribs, nine elongated trunk vertebrae, ribs that are T-shaped in cross-section, and paired abdominal ribs lacking lateral and medial elements. These elements emerge in this order in modern turtle embryos. And like turtles, Eunotosaurus had no muscles between its ribs.

A histological analysis — the first of this kind for Eunotosaurus — confirmed other anatomical similarities.

Said Lyson, “The consilience between the fossil and developmental data indicate that first the ribs broadened, found in Eunotosaurus, then the neural spines of the vertebrae broadened, found in later stem turtles, and finally osteoderms on the perimeter of the shell, found in most living turtles, formed, and everything sutured together to form the modern-day turtle shell.”

Lyson received his doctorate from Yale in geology & geophysics in 2013. Other authors on the paper are Gabe S. Bever of the New York Institute of Technology, Torsten M. Scheyer of the Universitaet Zuerich, Allison Y. Hsiang of Yale and Jacques A. Gauthier, also of Yale.