Keeping beverages cool in summer: It’s not just the heat, it’s the humidity

In spring a person’s thoughts turn to important matters, like how best to keep your drink cold on a hot day. Though this quest is probably as old as civilization, University of Washington climate scientists have provided new insight.

It turns out that in sultry weather condensation on the outside of a canned beverage doesn’t just make it slippery: those drops can provide more heat than the surrounding air, meaning your drink would warm more than twice as much in humid weather compared to in dry heat. In typical summer weather in New Orleans, heat released by condensation warms the drink by 6 degrees Fahrenheit in five minutes.

“Probably the most important thing a beer koozie does is not simply insulate the can, but keep condensation from forming on the outside of it,” said Dale Durran, a UW professor of atmospheric sciences.

He’s co-author of results published in the April issue of Physics Today that give the exact warming for a range of plausible summer temperatures and humidity levels. For example, on the hottest, most humid day in Dhahran, Saudi Arabia, condensation alone would warm a can from near-freezing temperature to 48 degrees Fahrenheit in just five minutes. 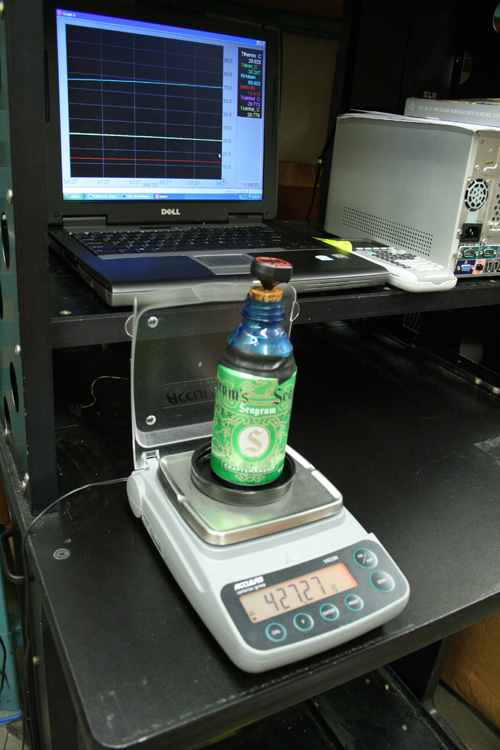 A test subject being weighed to measure the amount of condensation. The cap prevents air from moving through the opening on top. Image credit: Univ. of Washington

The investigation began a couple of years ago when Durran was teaching UW Atmospheric Sciences 101 and trying to come up with a good example for the heat generated by condensation. Plenty of examples exist for evaporative cooling, but few for the reverse phenomenon. Durran thought droplets that form on a cold canned beverage might be just the example he was looking for.

A quick back-of-the-napkin calculation showed the heat released by water just four thousandths of an inch thick covering the can would heat its contents by 9 degrees Fahrenheit.

“I was surprised to think that such a tiny film of water could cause that much warming,” Durran said.

Though he’s normally more of a theoretician, Durran decided this result required experimental validation. He recruited co-author Dargan Frierson, a UW associate professor of atmospheric sciences, and they ran an initial test in Frierson’s little-used basement bathroom, using a space heater and hot shower to vary the temperature and humidity.

The findings corroborated the initial result, and they embarked on a larger-scale test.

“You can’t write an article for Physics Today where the data has come from a setup on the top of the toilet tank in one of the author’s bathrooms,” Durran said.

First they recruited colleagues in Frierson’s beachside hometown of Wilmington, North Carolina, to duplicate the experiment and compare results with those taken on a hot, dry Seattle day. But they decided they needed to test a wider range of conditions.

Finally, last summer undergraduates Stella Choi and Steven Brey joined the project to run a proper experiment in the UW Atmospheric Sciences building. They unearthed an experimental machine with styling that looks to be from the 1950s, last used decades ago to simulate cloud formation.

With funding for educational outreach from the National Science Foundation, the students first cooled a can in a bucket of ice water then dried it and placed it in the experimental chamber dialed up to the appropriate conditions. After five minutes they removed the can, weighed it to measure the amount of condensation, and recorded the final temperature of the water inside.

The phenomenon at work – latent heat of condensation – is central to Frierson’s research on water vapor, heat transfer and global climate change.

“We expect a much moister atmosphere with global warming because warmer air can hold a lot more water vapor,” Frierson said. Because heat is transferred when water evaporates or condenses, this change affects wind circulation, weather patterns and storm formation.

Durran’s research includes studies of thunderstorms, which are powered by heat released from condensation in rising moist air.

As for his demonstration of the heat released during this process, he and Frierson are now working with the National Center for Atmospheric Research to develop an educational tool that will let students around the world try the experiment and post their results online for comparison.

The example promises to become as classic as a cold drink on a hot summer day.