How Tattoos ‘Move’ With Age

The dyes which are injected into the skin to create tattoos move with time – permanently altering the look of a given design. In this month’s Mathematics Today Dr Ian Eames, a Reader in Fluid Mechanics at UCL, publishes a mathematical model enabling us to estimate the movement of these ink particles and predict how specific tattoo designs will look several years in the future.

“Tattoos are incredibly popular worldwide with more than a third of 18-25 year olds in the USA sporting at least one design,” says Dr Eames. “A great deal of work has already been done on the short term fate of ink particles in the skin, tracking them over periods of just a few months – but much less is known about how these particles move over longer periods of time. 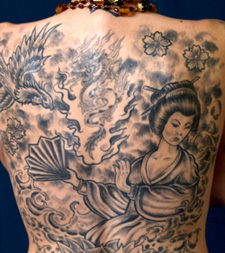 “This paper provides a mathematical framework enabling us to predict how ink particles move over 20 year periods. It helps pave the way towards assessing whether there are any long-term health implications with tattoos – in addition to giving people an idea of how their chosen design could look several years down the line.”

Tattoo inks are a suspension of particles which are insoluble in water. Heavy metals such as mercury, lead, cadmium, nickel, zinc and iron are used for colours and the tattoos are created by locally puncturing the dermis level of the skin, while simultaneously applying ink.

The damage to the skin leads to an initial immune response and white blood cells arrive to clear the debris. During this process, some of the ink particles are removed from the body via the lymphatic system, while the remainder are engulfed in fibroblast cells and sealed below the surface of the skin. The dispersal of the ink particles occurs over time as the cells which contain them either divide, or die and exit the body.

“Skin type, age, size, exposure to the sunlight and the type of ink which is used all influence how a tattoo disperses with time,” says Dr Eames. “But broadly speaking, what my paper shows is that the small details in a tattoo are lost first, with thicker lines being less affected. Although finely detailed tattoos might look good when they are first done, they tend to lose their definition after 15 years – depending on how fine the lines are.”