How do we feel pain?

One day Donald Simone, then a psychology major at Northeastern University, was thumbing through the job listings for work-study students.

He found several choices, including a cafeteria job and one in a neuroscience lab. He decided to try the science lab.

“It was studying eye movements and the parts of the brain that control them in different conditions, for example, darkness,” says Simone. “I went into that lab and ended up loving it. I thought doing anything with the brain was fascinating.”

The experience was pivotal. He remained a psychology student through graduate school (City University of New York), and then obtained a postdoc (Yale Medical School) and studied pain mechanisms using electrophysiological and psychophysical approaches. Now a professor, division director, and interim department chair in the School of Dentistry, he came to the University of Minnesota in 1992 and has distinguished himself in the field of hyperalgesia, or pain hypersensitivity.

He focuses on how the nervous system encodes pain and hyperalgesia at the levels of the peripheral nerve (a nerve outside the brain and spinal cord) and spinal cord, and is investigating how cannabinoids, which may be manufactured in the body (endogenous cannabinoids), a Cannabis plant, or a laboratory, can alleviate pain. His discoveries on pain mechanisms lay groundwork for new approaches to relieve pain hypersensitivity. 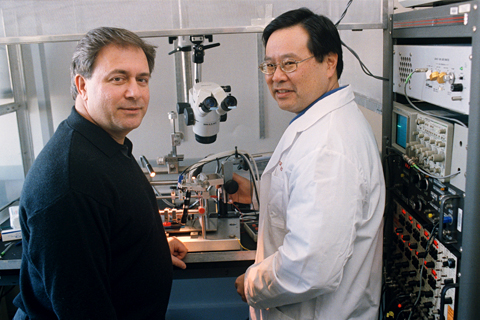 In work with colleagues Virginia Seybold of the U’s Department of Neuroscience and Iryna Khasakova in his own lab, Simone has found that in a variety of pain models, both endogenous and synthetic cannabinoids can produce an analgesic effect by acting in the periphery.

For example, anybody who’s had a sunburn knows that the injured skin is hypersensitive to touch and heat. Injecting capsaicin, the “hot” component of chili peppers, under the skin models this effect temporarily. After injecting capsaicin in a mouse paw, researchers have found that the mouse tolerates less pressure and heat to that paw than to its opposite (control) paw. Similarly, tumor cells injected in a hind foot make it hypersensitive to touch and temperature.

“We can quantify the change in sensitivity after injecting [even] a very low dose of cannabinoids at the site of injury,” says Simone. “For example, if we apply [a given amount] of weak pressure, a normal mouse withdraws the foot 10 to 20 percent of the time. With a tumor, it’ll withdraw it 80 percent of the time.

“But when we add a cannabinoid to the hypersensitive paw, that 80 percent drops dramatically. “

A tumor produces pain by exciting and sensitizing nerve fibers in the skin that transmit pain information, Simone explains. But certain synthetic and endogenous cannabinoids reduce the excitability of those pain fibers.

Studies elsewhere have confirmed that in humans, too, cannabinoids have analgesic effects when applied to peripheral areas, Simone notes.

One obvious stumbling block: those mind-altering effects when cannabinoids and opiates get into the bloodstream.

“If cannabinoids and opiates are effective outside the brain, then you can bypass the side effects,” says Simone. “If a cannabinoid that doesn’t cross the blood-brain barrier were developed, there may be some pain relief without the unwanted side effects.”

In current work, Simone is examining the ability of cannabinoids to decrease pain from chemotherapy, spinal mechanisms that contribute to pain in sickle cell disease, and the mechanisms by which pathways originating in the medulla can actually facilitate pain transmission in the spinal cord and enhance pain.

And as for the work-study program that got him started, Simone says it truly changed his life.

“It introduced me to the career that I chose. I don’t believe it would have happened without my work study experience.”