COLUMBUS, Ohio – A South American butterfly flapped its wings, and caused a flurry of nanotechnology research to happen in Ohio.

Researchers here have taken a new look at butterfly wings and rice leaves, and learned things about their microscopic texture that could improve a variety of products.

For example, the researchers were able to clean up to 85 percent of dust off a coated plastic surface that mimicked the texture of a butterfly wing, compared to only 70 percent off a flat surface.

In a recent issue of the journal Soft Matter, the Ohio State University engineers report that the textures enhance fluid flow and prevent surfaces from getting dirty – characteristics that could be mimicked in high-tech surfaces for aircraft and watercraft, pipelines, and medical equipment.

“Nature has evolved many surfaces that are self-cleaning or reduce drag,” said Bharat Bhushan, Ohio Eminent Scholar and Howard D. Winbigler Professor of mechanical engineering at Ohio State. “Reduced drag is desirable for industry, whether you’re trying to move a few drops of blood through a nano-channel or millions of gallons of crude oil through a pipeline. And self-cleaning surfaces would be useful for medical equipment – catheters, or anything that might harbor bacteria.”

About the images below: This series of images shows the texture on the surface of a butterfly wing. Engineers studied the texture to devise dirt- and water-resistant coatings for devices such as pipes and medical equipment. An electron microscope revealed micrometer-scale features that resemble shingles on a roof, and an even finer nanometer-scale features: parallel grooves on the surface of the shingles. Photos by Jo McCulty, electron microscope images by Bharat Bhushan and Gregory Bixler. All courtesy of Ohio State University. 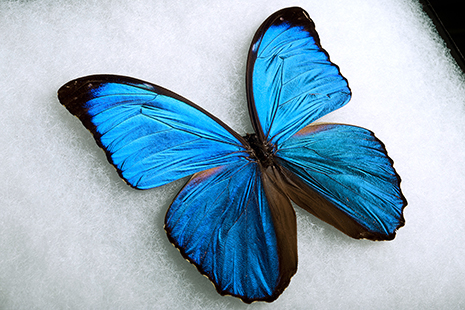 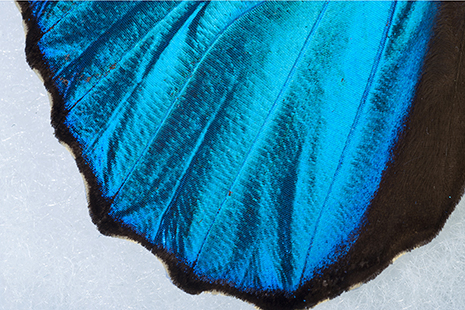 Zooming in, texture becomes visible on the wing. 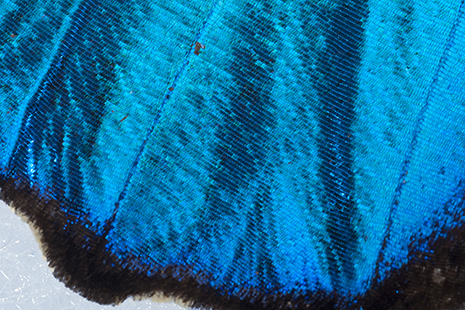 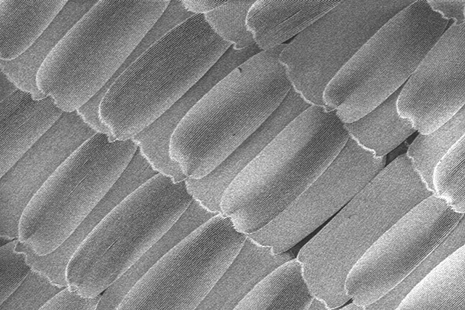 Electron microscope image reveals the texture on the micrometer scale. 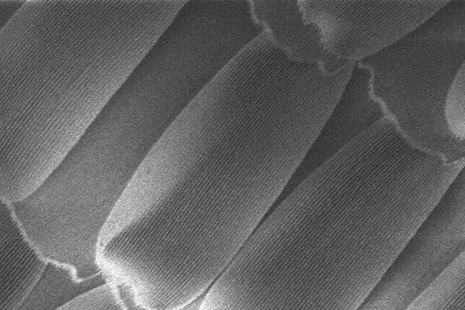 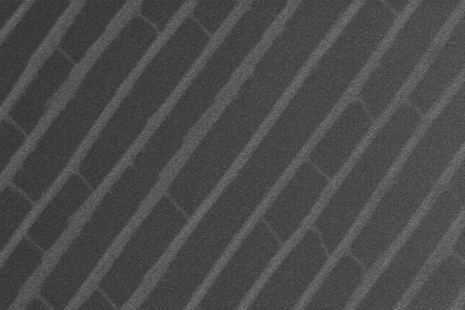 Bhushan and doctoral student Gregory Bixler used an electron microscope and an optical profiler to study wings of the Giant Blue Morpho butterfly (Morpho didius) and leaves of the rice plant Oriza sativa. They cast plastic replicas of both microscopic textures, and compared their ability to repel dirt and water to replicas of fish scales, shark skin, and plain flat surfaces.

Common to Central and South America, the Blue Morpho is an iconic butterfly, prized for its brilliant blue color and iridescence. Beyond its beauty, it has the ability to cast off dirt and water with a flutter of its wings.

For a butterfly out in nature, staying clean is a critical issue, Bhushan explained. 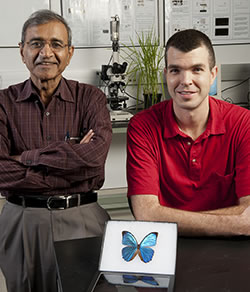 “Their wings are so delicate that getting dirt or moisture on them makes it hard to fly,” he said. “Plus, males and females recognize each other by the color and patterns on their wings, and every species is unique. So they have to keep their wings bright and visible in order to reproduce.”

The electron microscope revealed that the Blue Morpho’s wings aren’t as smooth as they look to the naked eye. Instead, the surface texture resembles a clapboard roof with rows of overlapping shingles radiating out from the butterfly’s body, suggesting that water and dirt roll off the wings “like water off a roof,” Bhushan said.

The rice leaves provided a more surreal landscape under the microscope, with rows of micrometer- (millionths of a meter) sized grooves, each covered with even smaller, nanometer- (billionths of a meter) sized bumps – all angled to direct raindrops to the stem and down to the base of the plant. The leaf also had a slippery waxy coating, which keeps the water droplets flowing along.

The researchers wanted to test how butterfly wings and rice leaves might display some of the characteristics of other surfaces they’ve studied, such as shark skin, which is covered with slippery, microscopic grooves that cause water to flow smoothly around the shark. They also tested fish scales, and included non-textured flat surfaces for comparison.

After studying all the textures close up, the researchers made molds of them in silicone and cast plastic replicas. To emulate the waxy coating on the rice leaves and the slippery coating on shark skin (which in nature is actually mucous), they covered all the surfaces with a special coating consisting of nanoparticles.

In one test, they lined plastic pipes with the different coated textures and pushed water through them. The resulting water pressure drop in the pipe was an indication of fluid flow.

For a pipe about the size of a cocktail straw, a thin lining of shark skin texture coated with nanoparticles reduced water pressure drop by 29 percent compared to the non-coated surface. The coated rice leaf came in second, with 26 percent, and the butterfly wing came in third with around 15 percent.

Then they dusted the textures with silicon carbide powder – a common industrial powder that resembles natural dirt – and tested how easy the surfaces were to clean. They held the samples at a 45-degree angle and dripped water over them from a syringe for two minutes, so that about two tablespoons of water washed over them in total. Using software, they counted the number of silicon carbide particles on each texture before and after washing.

The shark skin came out the cleanest, with 98 percent of the particles washing off during the test. Next came the rice leaf, with 95 percent, and the butterfly wing with about 85 percent washing off. By comparison, only 70 percent washed off of the flat surface.

Bushan thinks that the rice leaf texture might be especially suited to helping fluid move more efficiently through pipes, such as channels in micro-devices or oil pipelines.

As to the Blue Morpho’s beautiful wings, their ability to keep the butterfly clean and dry suggests to him that the clapboard roof texture might suit medical equipment, where it could prevent the growth of bacteria.