How age opens the gates for Alzheimer’s

With advancing age, highly-evolved brain circuits become susceptible to molecular changes that can lead to neurofibrillary tangles — a hallmark of Alzheimer’s Disease, Yale researchers report the week of March 17 in the Proceedings of the National Academy of Sciences.

The findings not only help to explain why age is such a large risk factor for Alzheimer’s, but why the higher brain circuits regulating cognition are so vulnerable to degeneration while the sensory cortex remains unaffected.

“We hope that understanding the key molecular alterations that occur with advancing age can provide new strategies for disease prevention,” said Amy F.T. Arnsten, professor of neurobiology and one of the senior authors of the study.

Neurofibrillary tangles are made from a protein called tau, which becomes sticky and clumps together when modified in a process called phosphorylation. The Yale study found that phosphorylated tau collects in neurons in higher brain circuits of the aging primate brain, but does not accumulate in neurons of the sensory cortex. Phosphorylated tau collects in and near the excitatory connections called synapses where neurons communicate and can spread between cells in higher brain circuits, the study found. 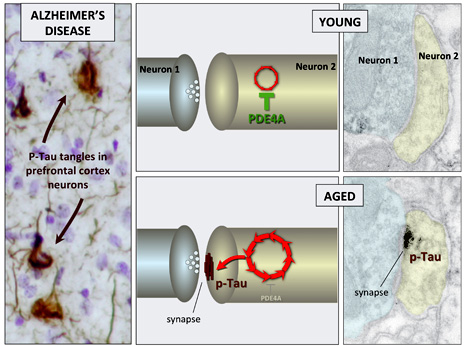 A chemical “vicious cycle” (red arrows) leads to a modification, or phosphorylation, of the protein tau — cause of the neurofibrillary tangles that are a hallmark of Alzheimer’s. In young neurons, this cycle is held in check by the enzyme phosphodiesterase PDE4A. With advanced age, PDE4A is lost, leading to a buildup of the damaging tau protein. Image credit: Graphic of human Alzheimer’s Disease courtesy of John Morrison and Patrick Hof

The study led by Yale researchers Becky C. Carlyle, Angus Nairn, Arnsten and Constantinos D. Paspalas found clues about what causes tau to become phosphorylated with advancing age.  They uncovered age-related changes in the molecular signals that control the strength of higher cortical connections. In young brains, an enzyme called phosphodiesterase PDE4A sits near the synapse where it inhibits a chemical “vicious cycle” that disconnects higher brain circuits when we are in danger, switching control of behavior to more primitive brain areas.  They further found that PDE4A is lost in the aged prefrontal association cortex, unleashing a chemical cascade of events that increase the phosphorylation of tau. This process may be amplified in humans, where high order cortical neurons have even more excitatory connections, leading to tangle formation and ultimately cell death.

“This insight into one pathway by which tau may influence the onset and progression of Alzheimer’s disease takes us a step closer to unraveling this complex and devastating disorder,” said Dr. Molly Wagster, of the National Institutes of Health, a co-funder of the research.

The new study may also help to explain why head injury is a risk factor for Alzheimer’s, as it may also increase the activity of the chemical  “vicious cycle.”

“Now that we begin to see what makes neurons vulnerable, we may be able to protect cells with treatments that mimic the protective effects of PDE4A,” said Arnsten.

The research was funded by the National Institute on Aging grant PO1 AG030004, as well as an NIH Pioneer Award DP1AG047744 to AFTA, and NIH UO1 MH081896 award to NS, the Kavli Neuroscience Institute at Yale, and a gift to CDP to honor the memory of Elsie Louise Torrance Higgs.