Emily Chen still vividly remembers the lecture on gecko feet. She was an eighth grader attending Berkeley Lab’s Nano*High program to hear materials scientist Arun Majumdar explain how what he was learning about gecko feet might translate into a new adhesive product based on carbon nanotubes.

“It never occurred to me how much we look to nature to do things in science,” Chen says. “It was also my first encounter with materials science; he talked a little about other fields in materials science, and what he does, like studying breakage, and it never really occurred to me that people did that.”Majumdar, then a Berkeley Lab senior scientist, went on to become director of the Department of Energy’s Advanced Research Projects Agency-Energy (ARPA-E), but perhaps more remarkably, Chen went on to graduate high school while attending almost every single Saturday morning lecture of the Nano*High program, then decided to attend MIT, where she declared a major in materials science and engineering.

“At the end of my first Nano*High talk, I walked away curious about academia, thirsty to meet more lecturers, empowered and convinced that I could be part of the next generation to make revolutionary and meaningful scientific discoveries,” Chen wrote in a recent letter to Berkeley Lab. “As my freshman year at MIT comes to a close, and an impending choice of major has forced me to carefully examine my interests and reevaluate my strengths, I cannot be more grateful or lucky to have encountered Nano*High.” 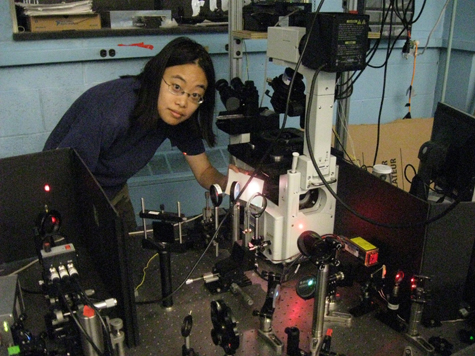 About the image above: While in high school, Janet Sheung did a summer internship at Berkeley Lab in physics. She’s now completing a doctorate in biophysics, and is custom building a 3D single molecule imaging system to study proteins. Photo courtesy Janet Sheung.

Of course not every student who participates in one of Berkeley Lab’s educational programs is as profoundly affected as Chen. Some students may in fact realize that a career in science is not for them. Yet there are a number of students who come away from a Berkeley Lab summer internship—or just a weekend lecture—infected by the scientists’ passion for their work and with a sharper focus on their own academic and career path.

“I knew I was good at math and physics, but before doing the internship I didn’t quite understand you can earn a living doing this, ” says Janet Sheung, who did two summer internships at Berkeley Lab in physics and is now a graduate student in physics at the University of Illinois at Urbana-Champaign.She still recalls being shocked when her mentor, Berkeley Lab physicist Robert Cahn, derived formulas from scratch. “It was the first time I saw someone who understood the formula and didn’t need to memorize it,” she says. “He taught me how to think like a physicist. I have memories of him bubbling with enthusiasm.”

The Nano*High program, which just finished its seventh year, is run by Berkeley Lab’s Materials Science Division, and has become so popular it has had to move to a larger auditorium on the UC Berkeley campus. The internship programs are run by the Lab’s Center for Science and Engineering Education (CSEE), which offers educational programs for students of all ages as well as for science teachers from throughout the country.

“We know this does make a big impact on people that come here,” says CSEE Director Susan Brady. “Many people tell us it changed their life. In some cases, they realized it wasn’t for them. I consider that a success: if you can help a young person early in their career know what they do or do not want to do, it’s a success. Better to happen as a high school student than as a Ph.D.”

Sheung says the benefits of her internship experience have continued through college and even into her graduate studies. “There were many things I got out of the internship that took many years to realize were important,” she says. “In comparison, I can’t remember anything I learned in my high school physics classes that is useful right now. And in graduate school, most people I know switch groups at least once because what you learned in class is so different from what you do in the lab. So the people who had spent time doing research have a better idea of what group is a good fit for them.” 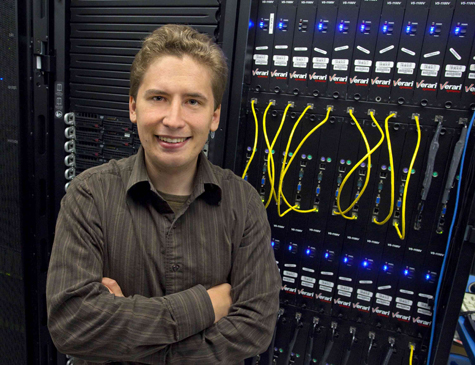 About the image above: Larry Pezzaglia turned two summer internships at Berkeley Lab into a career as a system administrator. Photo by Roy Kaltschmidt/Berkeley Lab Public Affairs.

Larry Pezzaglia enjoyed his first internship in the Computing Sciences Division so much he came back a second summer. Then he went on to major in computer science at UC Berkeley, work part-time at Berkeley Lab during the summers, and after graduating returned to the Lab again, where he is now a system administrator, helping to maintain scientific workstations, production servers and high-performance computing clusters for the division. He says the internship helped him figure out that his early interest in computers was not just a hobby but a potential career choice.

“I think it gave me a leg up as well as additional resolve to pursue my classes because I had the opportunity to see what a career in this field could be like before even starting college,” he says. “A lot of students don’t have that, so they’re working completely into the unknown. They’re studying something but have no idea what they can do with it.”

Even if students do not end up pursuing careers in science, helping them achieve a better understanding of how scientists do their work is also considered a success, says Mark Alper, a materials scientist and a co-founder of the Nano*High program.

“We just want kids to see that science is fun and interesting and rewarding,” Alper says. “There’s something about hearing it from the guy who discovered it and did the work and can field questions about where this field is going, rather than just learning a little by reading the textbook. It seems to be working.”