What started out as an around-the-world backpacking trek for a recent college graduate turned into a volunteer program that builds hope by constructing schools in some of poorest places on the planet.

Jim Ziolkowski, best-selling author and founder of buildOn, a nonprofit that erects schools in developing countries, shared his experiences and vision during a talk given Tuesday evening, March 11, at the University of Delaware’s Mitchell Hall.

Speaking to some 350 students and members of the UD community, Ziolkowski recounted how he got lost in the jungles of Nepal but found a life’s mission and founded a movement that has built some 628 schools worldwide.

“Right after I got out of college, I got a backpack and traveled around the world, and was walking through Nepal, during the monsoon season,” Ziolkowski said. “I had been going about six days, and had wandered off my main route.”

He recalled that he was overwhelmed by the injustice caused by the extreme poverty in which many of the people lived.

Tired from trudging in the nearly around-the-clock rain, and from pulling leeches off his body, Ziolkowski came across a village where a family offered him tea and a rest from his travels.

“I saw about 100 people dancing in the rain and the mud celebrating the building of a new school,” Ziolkowski said. “It was here in this village in Nepal that the seed of hope through education was planted in me.”

Returning to the United States, Ziolkowski wanted to make a difference in the world, but he also wanted to use his college education to build a successful career in the world of finance.

“I went to work for GE, was getting a paycheck for the first time,” Ziolkowski said. “I was still interested in what was going on in the inner city in America and saw a connection between this and the idea of building schools in poor countries like Malawi.” 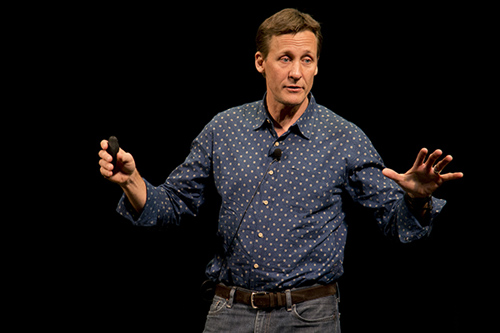 Jim Ziolkowski, best-selling author and founder of buildOn, a nonprofit that builds schools in developing countries, shared his experiences and vision during a talk March 11 at UD. Image credit: University of Delaware

Filled with lofty aspirations and good intentions, he and his brother Dave responded to a fax message he received about building a school in Malawi, a nation in southeast Africa.

“The message announced that we were building a school there, and that if we failed to come, the children would not get a school or an education,” Ziolkowski said. “I had seen an article about GE, and having worked there, I called Jim Parke, the chief financial officer.”

The call led to a meeting with Parke and legendary GE chairman and CEO Jack Welch, who suggested that Ziolkowski file for a grant.

Next came a fundraiser and a call from Parke saying that GE would commit $25,000 to build the school.

The beginning of the buildOn program in Malawi would lead years later to include volunteers such as Jimmy Arzu, a young man from the Bronx, in New York City, who joined the buildOn afterschool service learning program.

“Jimmy lived on the 20th floor of a building in a cluster of six building housing some 55,000 persons all living at below-poverty levels,” Ziolkowski said. “Jimmy’s mom died when he was 15 and there was a lot of pressure on him to join a gang.”

Ziolkowski spent three years living in the Bronx neighborhood described by an article in The New York Times as the most dangerous street corner in America.

“I learned that these youths are powerful and resilient,” Ziolkowski said. “There is a powerful sense of hope in the American inner city, the same kind of hope I saw in that village in Nepal. These young people who live there don’t want to leave there, they want to change their neighborhood for the better.”

In the years that followed, Arzu became part of the buildOn afterschool program, whose 74 U.S. high schools have logged 1,251,189 hours of service to the United States.

“When the students get involved, they touch the lives of others,” Ziolkowski said. “They are turning their lives and those of their communities around and helping to regain control of their lives.”

After nearly 20 years, Ziolkowski decided it was time to return to the Malawian village of Misomali, to see how things had changed.

He also recalled his first experience there, when he collapsed with malaria and dysentery and was taken to a hospital where a doctor told him he was two hours away from dying. His brother also had contracted the disease and had to return to the U.S. for treatment.

In 1993, the AIDS epidemic was claiming the lives of 30 percent of Malawians, and nearly 1 million people had died of malaria. A look around the village drove home the seriousness of the situation in which the villagers had committed to building a new school.

“When I went back to the village to finish the project after recovering, something changed in me and in my perspective,” Ziolkowski said. “I realized that when those children and their parents get malaria, they don’t make it. They don’t survive because they suffer from extreme poverty.”

That’s when Ziolkowski became convinced that education is one of the most important steps out of extreme poverty.

“We had to finish building that school,” Ziolkowski said. “We had to keep going and keep building more schools.”

The speaker was introduced by Elizabeth Burland, a junior public policy major and president of the UD chapter of buildOn, which was very instrumental in bringing Ziolkowski to campus.