The United States is stronger and more secure than it was prior to 9/11, but threats from overseas remain and must be proactively managed, said Secretary of Homeland Security Janet Napolitano, who visited campus April 16 for a public talk sponsored by the UCLA Burkle Center for International Relations.

In a globalized world, international cooperation is the key to identifying those who intend to do harm, she said, adding that threats to the global supply chain, the activities of drug and human smuggling organizations, and the prevalence of cyber-criminals who attempt to steal information and intellectual property and disrupt critical networks are among the major challenges facing the Department of Homeland Security.

Napolitano told the audience of approximately 400 inside UCLA’s Korn Hall that her agency has signed more than 130 international agreements since 2009 for the mutually beneficial exchange of information and noted that she recently met with officials in Mexico, Guatemala, Costa Rica, Panama, Honduras and Canada to negotiate and sign agreements. 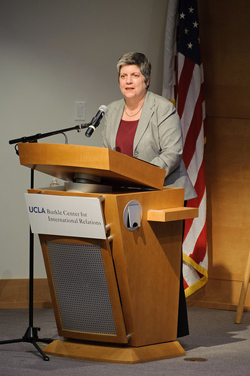 She cited several examples of how international collaboration is contributing to security efforts, including the improvement of supply-chain security between the U.S. and Canada and the development of technologies that allow Central American border and security officers to screen passengers and identify those who present risks.

Napolitano’s appearance at UCLA, which was met with a protest by about 40 people who chanted and held signs outside the event, ended with a question-and-answer session that touched on a variety of topics and concerns, including the Department of Homeland Security’s Secure Communities program and the deportation of undocumented individuals.

“It has been somewhat controversial … but it is an important tool,” she said, sparking outbursts from some in the audience, including a group of roughly a dozen people who chanted “Education, not deportation” before voluntarily leaving the room.

Napolitano went on to say that her department’s immigration-enforcement priorities include identifying those who violate U.S. criminal law, as well as fugitives and repeat offenders. She noted that last year, more than 90 percent of the individuals deported from the U.S. fell into those categories.

“That’s really the first time we’ve actually seen priorities intersecting in the immigration system,” she said. “That doesn’t mean that we don’t need immigration reform … that doesn’t mean that we weren’t disappointed that the Dream Act wasn’t passed by the Congress. I testified in favor of it, and we worked very hard to get it passed … We need to keep those efforts ongoing. That’s going to be a marathon, not a sprint. But in the meantime, we can do smart, effective enforcement.”

Other questions focused on the Department of Homeland Security’s role in the recovery and repatriation of stolen art and artifacts, Napolitano’s experiences as a woman working in a high-profile position in the male-dominated field of security and law enforcement, her opinion about recent internal reforms at her agency and what she considers the most necessary reform moving forward.

Napolitano’s talk at UCLA was part of a lecture series in which she is visiting colleges and universities across the country to discuss the most important homeland security issues facing America.